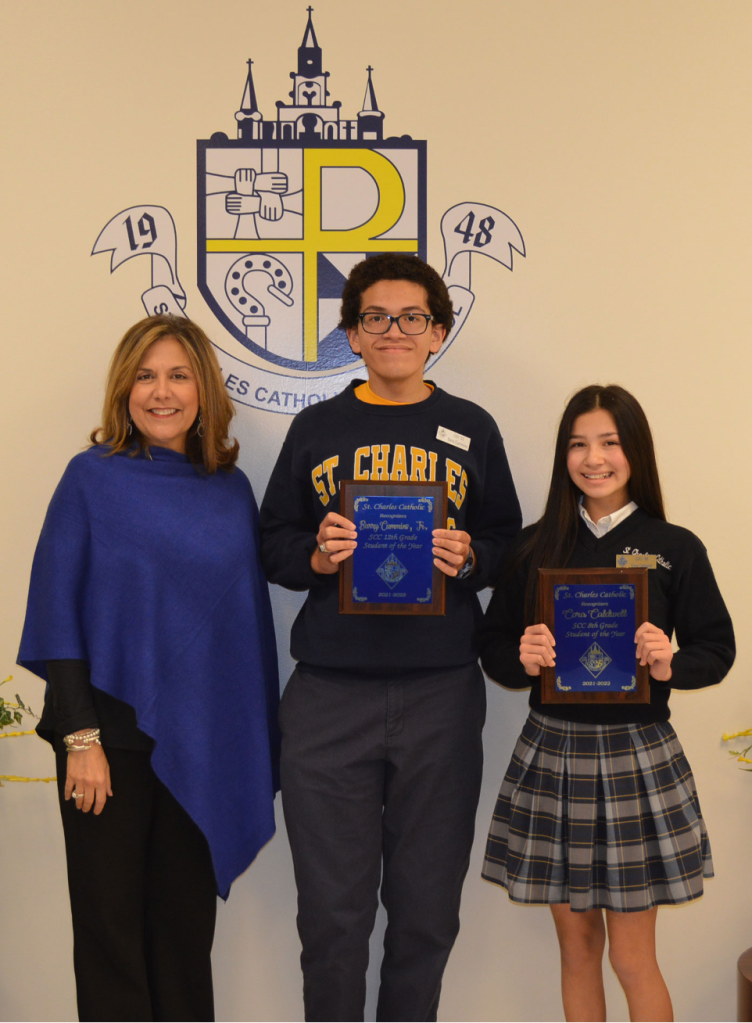 Barry Cummins, Jr. is the son of Barry, Sr. and Iris Henry Cummins of LaPlace.  He attended Ascension of Our Lord Elementary School before attending SCC where he currently serves as President of the National Honor Society and Mu Alpha Theta Mathematics Honor Society.  Cummins participates in many extracurriculars at SCC, including the Beta Club, Academic Games team, and Stagehands Drama Club.  He is also a member of the Senior Retreat Team.  Barry was chosen as both the Outstanding Sophomore and Junior Student of the Year by the SCC faculty, and he has maintained perfect attendance throughout his high school career.  He’s earned a place on the Principal’s list every year as well.  He attended Louisiana Boys State last summer, an opportunity for young men to learn about political and legislative leadership.  Barry attended UNO’s summer Core Element Arduino Microprocessing and Electronic Camp and their Core Element Coding camp in 2018.  He also attended UNO’s STEM Robotic Electrical Engineering Camp in 2020.  That same summer, received the CHEMstar NCF Leadership Award for Top Student at Xavier University in 2020.  Barry also attended Tulane’s Science Scholars Program in 2021. Cummins was appointed to SCC’s 30+ Club for students who earn a composite score of 30 or higher on the ACT after he earned a composite score of 33.  Barry consistently goes above and beyond in every venture and has maintained a 4.0 in the most rigorous curriculum SCC offers. His future plans include pursuing an engineering degree.  St. Charles is proud to have such a determined and well-rounded student represent the school.

Cora Caldwell, SCC’s eighth grade student of the year, is the daughter of Dr. Cynthia Caldwell and Mr. Paul Dey of Destrehan. Cora Caldwell was previously nominated as the Student of the Year when she was in the 5th grade at St. Charles Borromeo Elementary School. Caldwell graduated from St. Charles Borromeo in 2021.  While in middle school, Caldwell was a Student Council Member, a Beta Club member, a St. Charles Catholic Fountain of Youth Member, and a Fellowship of Christian Athletes attendee.  Caldwell found academic success winning second place in the Academy of Our Lady Regional Science Fair, and he excelled athletically with the Royals Dance Team, serving as Co-captain during the 2020-2021 school year. She was on the principal’s list every year that she attended St. Charles Borromeo.  Since becoming a Comet, Caldwell has become a Starstepper, a member of SCC’s award-winning dance team.   She received an academic scholarship from St. Charles for her placement test ranking, proving her academic talent, and she has maintained Principal’s List Honor Roll during her first year at SCC.

St. Charles Catholic extends congratulations and best wishes to these two students in all of their future ambitions.