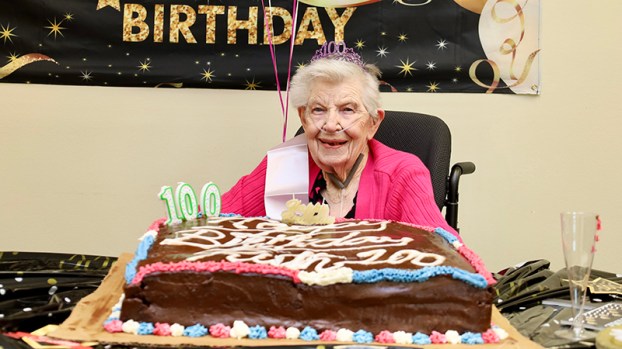 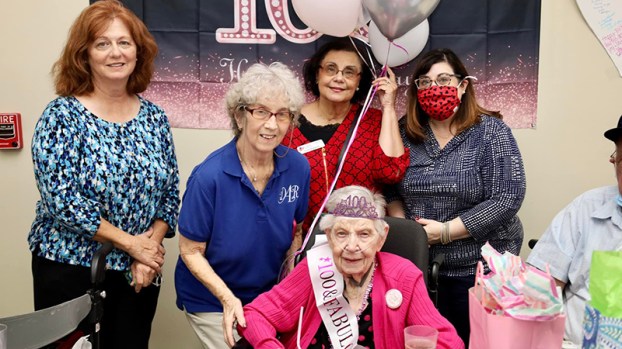 Mary Ellen Menge, Martha Bauman, Syria Mougrabi and Julie Fabregas of the Daughters of the American Revolution visit Ruth Knutson in honor of her 100th birthday at the Southeast Louisiana Veterans Home in Reserve. 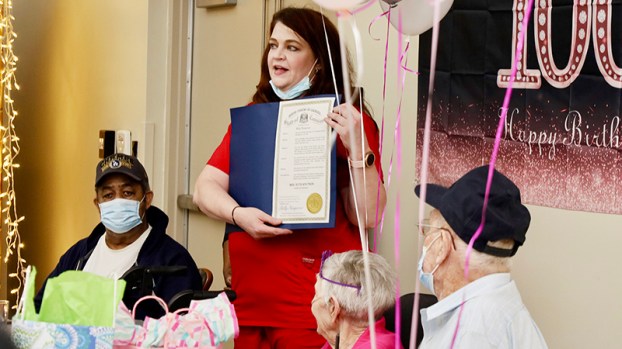 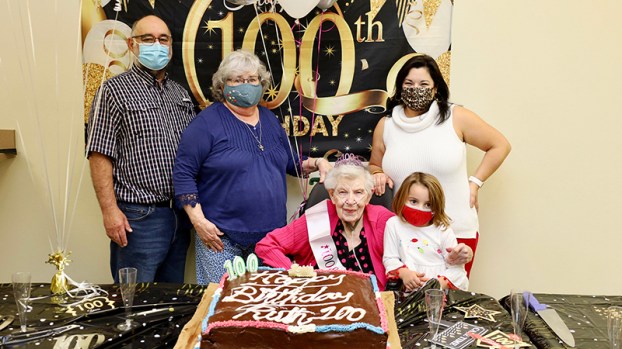 Pictured from left to right at the 100th birthday celebration are Michael and Tina Allain, Ruth Knutson, and Laura and Charlotte Alfonso.

RESERVE — Navy veteran Ruth Knutson often told her in-laws that she would live to be 107 years old. Now she’s beginning to reconsider.

“Add a couple more years to that,” Ruth mused as she peered over her 100th birthday cake last week at the Southeast Louisiana Veterans Home in Reserve. “I think 115 sounds like a nice, round number.”

Ruth’s birthday celebration proved that family isn’t limited to blood. She was joined by granddaughter-in-law Laura Alfonso, as well as Laura’s aunt and uncle, Tina and Michael Allain, who traveled all the way from Texas for the special occasion.

Also present was Ruth’s 5-year-old great-granddaughter, Charlotte Ruth, who was named in her honor.

Ruth was treated to proclamations signed by Representative Clay Schexnayder and Lt. Governor Billy Nungesser, in addition to birthday wishes from the Daughters of the American Revolution.

Ruth was born December 28, 1921 in Cincinatti, Ohio. She was among approximately 350,000 who served in the United States Armed Forces during World War II, opting to enlist in the U.S. Navy two months after the attack on Pearl Harbor.

Ruth was determined to join either the Army or the Navy, but that decision wasn’t met with open arms by her family. She was an only child, and her mother worried the Army was a bad influence that would blemish her reputation.

“If I’m a good girl now, I’ll be a good girl when I’m in the service,” Ruth reasoned with her mother all those years ago. Her father had her back, chiming in, “Let the kid go.”

After consulting with family members, her mother finally relented. Ruth vividly remembers her mother saying, “If you have to join something, join the Navy.”

After going through additional schooling, she was stationed at a recruiting station in Chicago, Illinois. Day in and day out, 16-year-old boys would come into the six-story building, either alongside their parents or with signed permission slips.

Famous musician Lawrence Welk would often come to Chicago to put on shows for the Army and Navy, and Ruth was lucky enough to get a photo with him. But the most important person she met during her time in the service was her husband, an Army pilot who she affectionately called her “Fly Boy.”

The two got married after their time in the service, and they lived with Ruth’s parents for about a year and a half before moving to Chicago to start a life in the suburbs. They adopted their only child, a daughter, and later welcomed a grandson.

Ruth was a snowbird living in Florida when she met granddaughter-in-law Laura Alfonso.

“When I met her, she was running a bridge club with ladies in their 90s. She was still walking the dog, driving and going on lunch dates with friends,” Laura said. “She just blew me away with her amazing life. She had tremendous tragedy and loss, losing her daughter and her husband, and yet she is still so happy to be alive and grateful for every day.”

Ruth ended up in Louisiana when she moved in with her grandson and his family in Baton Rouge. Laura said it was a joy to live with her for two years, and it was especially rewarding to see how wonderful she was with her great-granddaughter, Charlotte.

Ruth moved into the Southeast Louisiana Veterans Home in Reserve after she broke her hip and needed additional care. However, after having a hip replacement at 99 years old, she’s still going strong.

On her 100th birthday, Ruth admitted that she didn’t feel any different from the day before. She was most impacted not by the birthday milestone, but by the lengths her in-laws would go to remind her she is loved.

“I’m just an ordinary woman who served her country and lived life to the fullest,” Ruth said. “I did what I wanted to do when I wanted to do it. I had a wonderful marriage and a lovely family, and I can guarantee that no one has in-laws like me.”

Couple from Many, Louisiana Sentenced to Federal Prison for Trafficking Methamphetamine