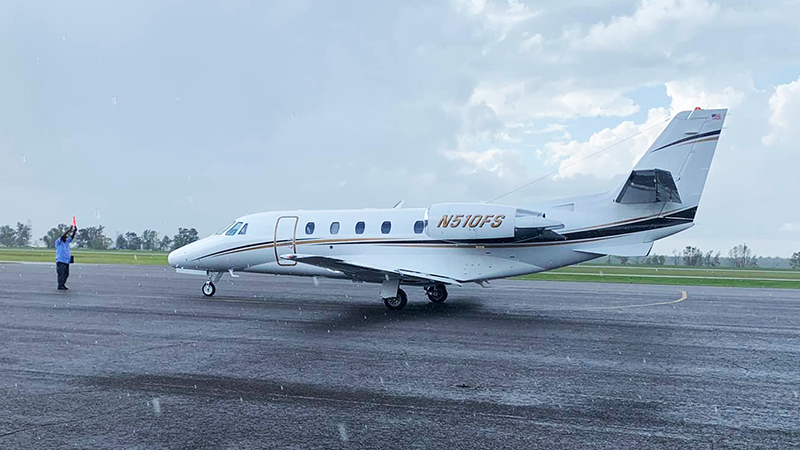 An airplane is seen on the runway of the Port of South Louisiana Executive Regional Airport the week of Christmas 2021.

RESERVE — The Port of South Louisiana Executive Regional Airport is expected to receive $159,000 from the Bipartisan Infrastructure Law, which will invest a total of $35,689,010 into 51 airports across Louisiana.

The U.S. Department of Transportation’s Federal Aviation Administration announced last week that $2.89 billion will be made available to airports around the country. Funds can be used for projects involving runways, taxiways, terminals, airport-transit connections and roadways, as well as safety and sustainability projects.

Investments into Louisiana airports range from $110,000 to more than $14 million. Funding will come from the Airport Infrastructure Grant program created by the Bipartisan Infrastructure Law. The Federal Aviation Administration has estimated that backlogs of airport modernization and safety enhancements across the country exceeds $43 billion.

Louisiana airports receiving funds will be able to submit projects to the FAA for review in coming weeks.

Located in St. John the Baptist Parish, the Port of South Louisiana Executive Regional Airport has numerous projects included in its capital improvement plan over the next five years, including a runway extension, drainage project, taxiway and apron overlay, among others.

Airport Director Lisa Braud said the ongoing Master Plan has been funded 100% by the Federal Aviation Administration and is being executed by Kutchins & Groh.

“In addition to that, we are hoping to break ground on another set of T-hangars funded in part by Louisiana Department of Transportation and Development,” Braud said. “Since 2020, we have completed a runway overlay project, a security gate access project and a 10 unit T-hangar project, all funded by the FAA and the LaDOTD with matching Port funds. Overall, $8.2 million has been invested in the airport since the Port took over.”

According to a Louisiana DOTD press release, the FAA encourages airports to prioritize projects that aim to increase airport safety, equity and sustainability.

“Building back better is not just a motto; it is actually happening,” said Louisiana Department of Transportation and Development Secretary Shawn D. Wilson, Ph.D., president of the American Association of State Highway and Transportation Officials. “This investment will help us continue our mission to improve our aviation infrastructure to ensure a safe, modern and well managed system of airports which provides convenient and efficient access to the state for tourism, commerce, industrial interests, recreation and economic development.”

Renee Lapeyrolerie, Louisiana DOTD commissioner of multimodal commerce, said the investment will help spur economic development across the state as airports rebound from the COVID-19 pandemic.

Port of South Louisiana Executive Director Paul Aucoin said the new infrastructure law is a step in the right direction for the future of the Mississippi River corridor.

“It’s important that Congress approved a Bipartisan Infrastructure Law because by maintaining the integrity of our regional airports we remain competitive with other states and other countries,” Aucoin said.

Located in the heart of South Louisiana’s industrial corridor, the Executive Regional Airport welcomes business jets and other aircraft carrying passengers who conduct business across the region and beyond.

According to Braud, the Executive Regional Airport attracts aircraft operations by offering lower fuel costs and no landing fees.

“We also hope to start bringing cargo into the airport in the next few years as well,” she said.

The Executive Regional Airport gives back to the St. John Parish community with an annual Aviation Awareness Day event in coordination with local nonprofit group Guys Achieving Goals. While the event has been put on pause for the past two years, organizers have discussed bringing it back for 2022 to expose more than 300 school-aged children to the field of aviation.

The Executive Regional Airport also recently held its first 5K race and raised more than $12,000 for Pilots for Patients, a nonprofit organization that transports individuals to treatment facilities at no cost to families.

The general public is invited to view various aviation groups and aircraft during fly-ins held on the third Saturday of every month. Events are announced through the Port of South Louisiana Executive Regional Airport Facebook page.