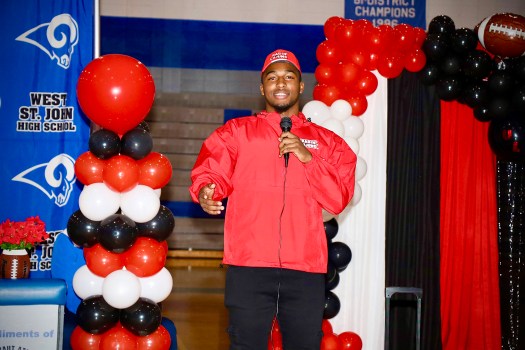 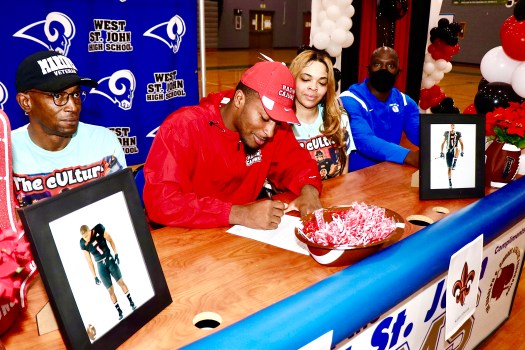 West St. John inside linebacker Kailep Edwards signs a letter of intent to play football at the University of Louisiana at Lafayette.

EDGARD — Heavily recruited throughout his high school career, West St. John inside linebacker Kailep Edwards had offers on the table from programs including but not limited to Arizona State, Colorado, Houston, Memphis, Michigan State, Mississippi State, Penn State, South Alabama and Tulane.
In August, Edwards committed to represent his home state at the University of Louisiana at Lafayette. That decision was solidified during Early National Signing Day as Edwards put pen to paper on a letter of intent to join the Ragin’ Cajuns football team.
The ceremony was held last week in the West St. John gymnasium with support from Edwards’ family, coaches, teammates and classmates.
Edwards admitted that he didn’t always envision himself playing high school football, much less college. He took a chance when former Rams coach Brandon Walters asked him to try out for West St. John’s football team, and that decision altered his course in life in the most unimaginable way. Throughout his junior and senior seasons, Edwards received all-district, all-state and first team defensive MVP accolades.
Faced with 15 college offers, Edwards said UL stood out from all the rest when it came time to make his next life-changing decision.
“It’s all about the culture,” Edwards said. “They stuck with me from day one. All year, they hit me up. I felt the love, and that’s what made me pick UL.”
Edwards plans to pursue sports medicine while living out his college football dreams. He’ll never forget his time spent at West St. John.
“It’s been a wonderful four years here. I appreciate all of my teachers pushing me to be the best me that I can be,” Edwards said. “I’m thankful for my team. It didn’t look good at the beginning of the season, but we still fought together and made it to the quarterfinals. We made it farther than anyone else thought we would have made it.”
West St. John head football coach Greg Johnson told Edwards to continue striving for the stars.Johnson said Edwards has been an asset to the team not only for his size and ability, but also because of his character and coachable attitude.
“First and foremost, Kailep’s leadership skills are off the chart. He’s the type of player that leads by example. Whatever coach asks him to do, he’s more than willing to sacrifice. He’s that type of kid that’s willing to do anything it takes for us to be victorious. He’s going to do what he’s supposed to do and try to help the young kids out,” Johnson said.
Edwards was joined by his parents, Tashika and Derick Washington, as well as his siblings, Kailee and Kailen Edwards, for the signing day ceremony.
Tashika Washington said she is most proud of her son for always putting one foot in forward, so matter what challenges lie ahead.