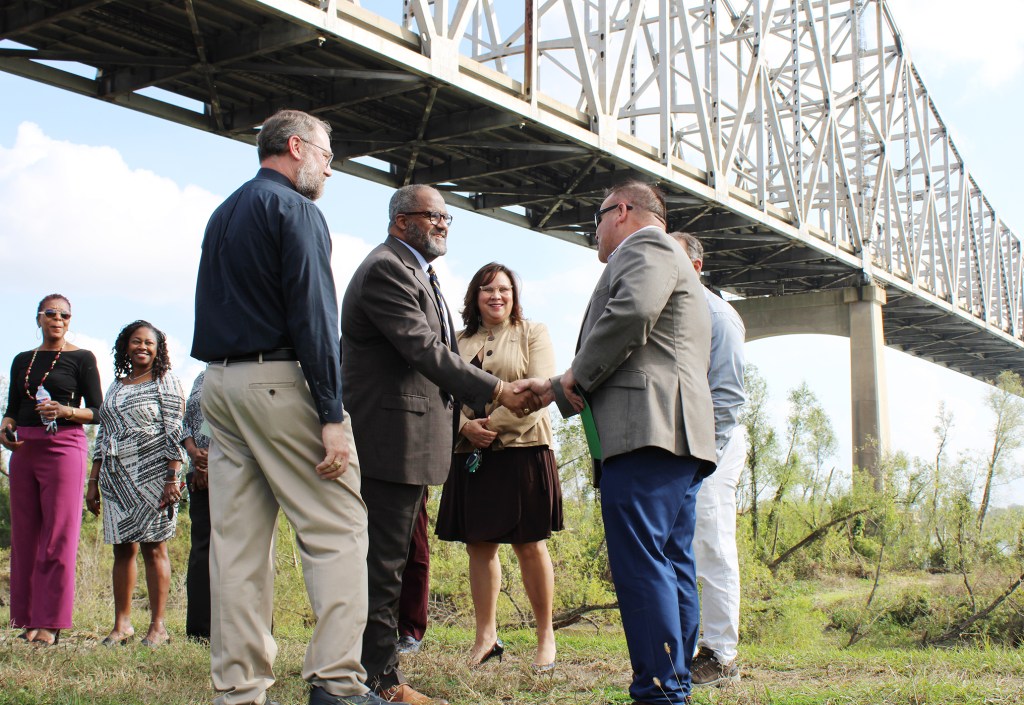 GRAMERCY — Congressman Troy A. Carter Sr. recently announced $30 million in upgrades for the Veterans Memorial Bridge connecting St. James and St. John the Baptist parishes.
The estimated $30 million project will consist of repainting the 30-year-old bridge and repairing deteriorating structural components. DOTD District Administrator Todd Donmyer said there will be other improvements involved, and engineers are currently developing plans for a more detailed scope of work.
Funding for this project has been secured through an influx of funds from the bipartisan infrastructure bill signed into law last month. Louisiana is anticipated to receive at least $7 billion in investments related to transit, rail, roads, bridges, flood protection and more.
The bidding process on the Veterans Memorial Bridge project is scheduled to begin in December 2022. Construction is estimated at roughly two years, depending on the final scope of the project.
Congressman Carter said the Louisiana Department of Transportation and Development has for years done the best it can to maintain infrastructure with limited resources. Now, Louisiana will have $7 billion to establish and strengthen infrastructure while making communities more resilient.
“The Veterans Memorial Bridge, like too many in Louisiana, has fallen into disrepair and has deferred maintenance,” Carter said. “Thanks to the Infrastructure Investment and Jobs Act, we now have resources to address many of the issues that we have long had to push aside. This bridge will undergo $30 million dollars worth of repairs and upgrades, better connecting people to jobs, kids to school, and strengthening our bridge for the next generation.”
Carter was joined by several state and local officials, including Department of Transportation and Development District Administrator Todd Donmyer, State Representative Randal Gaines, State Representative Ken Brass, St. James Parish President Pete Dufrense, St. John Parish Sheriff Mike Tregre, St. James Parish Sheriff Willy Martin and Gramercy Mayor Steven T. Nosacka.
Donmyer said this project is needed to maintain the Veterans Memorial Bridge in a state of good repair for years to come.
“This is a busy area, and it will continue to grow. Right now, estimated daily traffic for 2024 is almost 16,000 motorists a day, and that number is projected to increase to over 22,000 motorists a day by the year 2044,” Donmyer said. “This project, like others across the state, it’s just one piece in the puzzle to a vision of a grander Louisiana and an example of this administration’s commitment to invest in infrastructure and development.”
Donmyer added that the Infrastructure Investment and Jobs Act funding coming to Louisiana breaks down to approximately $4.8 billion for highways, $1 billion for bridges, $700 million for public transportation, $73 million for electric vehicle infrastructure, $179 million for airports, and $20 million for a more resilient transportation system to mitigate the effects of emergency weather events.
St. James Parish President Pete Dufresne agreed that improvements to the heavily traveled roadway are long overdue.
“…now, with the help of this bipartisan deal in our congressional delegation, we can see those improvements finally beginning,” Dufresne said. “The bridge project here in St. James Parish is the biggest investment expected on a road or bridge project in the 2022 fiscal year.”
State Representative Randal Gaines referred to the project as a bridge to the future of the River Parishes and the future of Louisiana. He praised Congressman Carter for being a powerful voice for residents of the River Region.
Meanwhile, State Representative Ken Brass said the Veterans Memorial Bridge project is only a start, and he looks forward to working with the administration on additional projects to expand highways along Louisiana’s River Parishes.
The Veterans Memorial Bridge was Carter’s second stop along his recent “Building a Better Louisiana Infrastructure Tour.”
During a series of four events over the past week, Carter has also announced $41.6 million for the IWGO Green Bridge in New Orleans East, $108 billion for public transportation investments nationwide, up to $102 billion for passenger rail projects nationwide, and $110 million in annual funding for the Minority Business Development Agency (MBDA) through 2025.