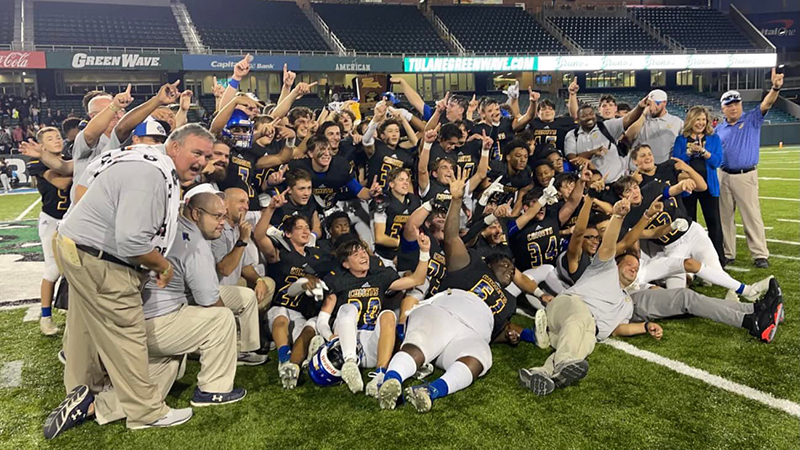 NEW ORLEANS — The St. Charles Catholic Comets have a great deal to celebrate as they are now the Louisiana Division III State Champions after defeating the Lafayette Christian Academy Knights 32-27 in Tulane’s Yulman Stadium on Saturday afternoon.

The Comets went into the match up with an undefeated season. However, this was not the first time they had faced off with the Knights. This contest made the third straight year the Comets faced the Knights for the championship, and the third time was definitely the charm for the Comets. And this time, the victory was ever-so sweet as the Comets made a huge statement on the Tulane field.

As St. Charles entered the third quarter, the intensity was still high, and with good cause, as special teams managed to block a punt and gave the fans even more to cheer about. The Comets scored again at 9:21 in the third, which made it a 23-14 game in favor of the Comets. The Comets continued to fight and played hard and scored another field goal at 4:48 which made the score 26-14. But the Knights also scored a touchdown, which made the third quarter ending score 26-20 in favor of the Comets.

The Knights were not going down without a knock-down, drag-out fight to defend their standing state title, and they scored a touchdown to take the lead for the first time in the game with less than 10 minutes left, 27-26 over the Comets.

The Comets continued to march down the field in search of a touchdown, in which they found, but missed the two-point conversion, which made the score 32-27 with the Comets in the lead with 2:32 left in the fourth quarter. The Knights couldn’t recover, and the Comets went away as the new Louisiana Division III State Football Champions. The Comets worked extremely hard, and their work had finally paid off.

This season demonstrated the extraordinary strength of the River Parish schools and athletes who played through the unimaginable obstacles of Hurricane Ida.

Today’s championship win was a spectacular finale for the 21 seniors on the Comets team and a befitting accomplishment to have first-year head coach Wayne Stein following the legendary Coach Monica.