How my roommate saved my life 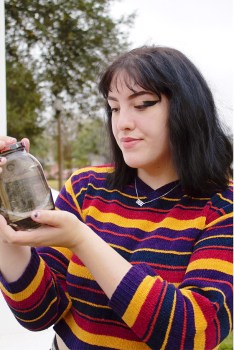 River Parishes native Lora Luquet and her roommate at Northwestern State University use an “energy jar” to more effectively communicate with each other. 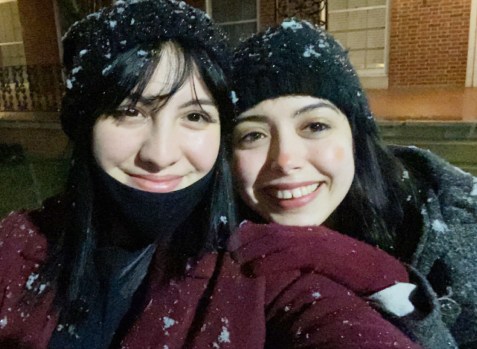 Lora Luquet, left, is pictured with her best friend and roommate, Angelina.

A jar sits in our dorm room. To anybody else, it’s just a jar. To us, however, it is everything.
My roommate, Angelina, and I know what works for us. We’ve lived together for three years, after all. We’ve fought, and we’ve cried, and we’ve bought way too much takeout for our wallets to handle. The jar is significant because we use it to keep ourselves accountable. When one of us is mad for no reason and brings that anger home with them, a dollar goes in the jar. When one of us says something hurtful, either to ourselves or to each other, a dollar goes in the jar.

I met Angelina in high school. I had known of her existence all through my four years there, but we didn’t become friends until senior year.

She was eccentric, talented, and caring in a way that many of my friends had not been in the past, and she later told me that she felt the same about me. Immediately we had a connection that neither of us had ever felt with anyone else we had met.
So, when we ended up at the same college, we moved in together.

“I was a little nervous because of the common notion that moving in with friends usually causes friction and resentment, and I was a little afraid our friendship might suffer from sharing such a small space,” Angelina says, reflecting on her anxiety over us moving in together. “At the same time, we had already worked out so much about our living situation beforehand, like chores and decor, that it seemed like that anxiety was purely based on rumor.”
After a few months of living together, our difficult mental states came to a head.

I had been angry, for seemingly no reason. I remember saying hurtful things to Angelina that I have since pushed out of my head due to my shame. We both said things we didn’t mean that night out of frustration, but we both took it to heart.

The sad truth of the matter is, although we had a big fight, there was really no significant reason for it. We had both been hesitant to divulge our feelings to one another out of fear of hurting each other, that a bunch of little annoyances had piled up to the point where we ended up hurting each other anyway.

“I remember the night we both got to an emotional breaking point because we had both been so worried about burdening the other person by talking about the problems that we’d been bottling everything up and distancing ourselves from each other,” Angelina says. “It was heartbreaking to realize how much we’d both been hurting but been too afraid to talk about. I felt like I had failed you as a friend for making you feel as though you couldn’t talk to me. Still, the irony of the two

of us doing the exact same thing was too funny not to laugh about. We cried and talked together for a while before softening the night with dinner.”
Little did I know, Angelina had been workshopping a plan to fix our problems.

I remember where I was when Angelina texted me the night she proposed her plan.

It was past midnight, at the beginning of July, a month before we would return to living together for our junior year. I was staying with my parents at the time, laying in my room surrounded by windows, listening to the cicadas sing outside. I always hated summer, partially because the heat was suffocating to me, but also because I wasn’t living with my best friend.

She had been talking about going to a rage room one day, a service where people pay money to smash fake objects, like televisions and desks. It was said to be therapeutic, and we both wanted to try it.
“What is the negative emotion that you think I experience the most, and what is the one that you experience the most?” she texted me.

I thought it was strange that she was asking at the time, especially so late. The more that I thought about it, though, I noticed I tended to get myself into ruts of depression for a long time. Often I would let it affect the way I treated her, and in the end, it hurt both of us.
Her solution to this was to create an “energy jar” for the common space of our dormitory.
“We could have something like a swear jar where we gradually accumulate money for a rage room for us one day,” she said.

The jar helped us implement honesty between us. We were pushed to express our feelings to each other without fear and work towards a common goal of strengthening our friendship. Although our problems were solved for the moment, there are people I know who aren’t as lucky.
Colie Plaster, a junior communications student at NSU, reflected on his first-year experience.
“I lived in Varnado and shared a single room. We were both in marching band, so we ended up spending a lot of time together. We got along really well for the first few months, but being so close ended up being a negative, and we got tired of each other to a degree,” Colie said. “I am not still friends with my freshman year roommate. We both left on bad terms when lockdown started, and we’ve both gone in different directions since then.”

Colie is now living in an apartment off-campus and is experiencing a living situation that is to his liking.
“My current roommate is my best friend from high school,” Colie said. “We have been around each other for a lot of important events in our young adult life, and especially living off-campus, we are really good at communicating when we need time or space, and other things like that.”

Hearing people’s experiences with their roommates has made me realize how fortunate I am.

I genuinely believe without Angelina I would’ve dropped out of college at this point. When I say my roommate saved my life, I’m not kidding.

I would be in a completely different place in life, and I never would have had the courage to seek professional help for the depression and anger I have experienced for as long as I can remember.

It was late May, a few weeks after the last semester of my sophomore year at NSU had wrapped up. We hadn’t implemented our jar yet. I had set up this appointment months earlier, after meeting with my counselor at school every week for months on end. After Angelina’s and my big argument, Angelina had suggested it to me, as she had planned on doing the same. Our mental health had been deteriorating over the semester, and we were both beginning to crumble.

But my resolve had been wavering ever since my appointment. I even questioned whether anything was wrong with me at all. At the very most, I thought I would be diagnosed with depression. For all I knew, I could’ve been making it up for attention. Sure, sometimes it was hard to get out of bed and go to class. Sometimes I snapped and said things I didn’t mean to hurt the ones I loved, especially Angelina, who was the most important person in my life. But that was normal, right?

It wasn’t.
Angelina and I were fully aware of our flaws. Our recent arguments just gave me the final push to get the help I desperately needed.

After my appointment, where my psychiatrist had poked at and examined parts of my brain that I didn’t even know I had problems with, I frantically texted Angelina.

“So, what’s the plan?” Angelina asked.
“He’s going to start me on three medications, which is standard for Bipolar II,” I said.

Angelina talked me through my shock. The more and more I thought about it, the more it made sense. I tended to snap, I was quick to anger. I had a hard time leaving my bed for weeks on end, and my grades reflected it. Sometimes I was a bad friend and a bad roommate. I was tough to live with.

The jar was our saving grace, I think.
The most important part of college is to have a support system, especially when you are moving so far away from home.

If you take anything from my story, let it be this: try to understand your roommate. Be compassionate and patient. If you are compatible, make them a part of your support system. You would be surprised how much it could save you.

I know it saved me.