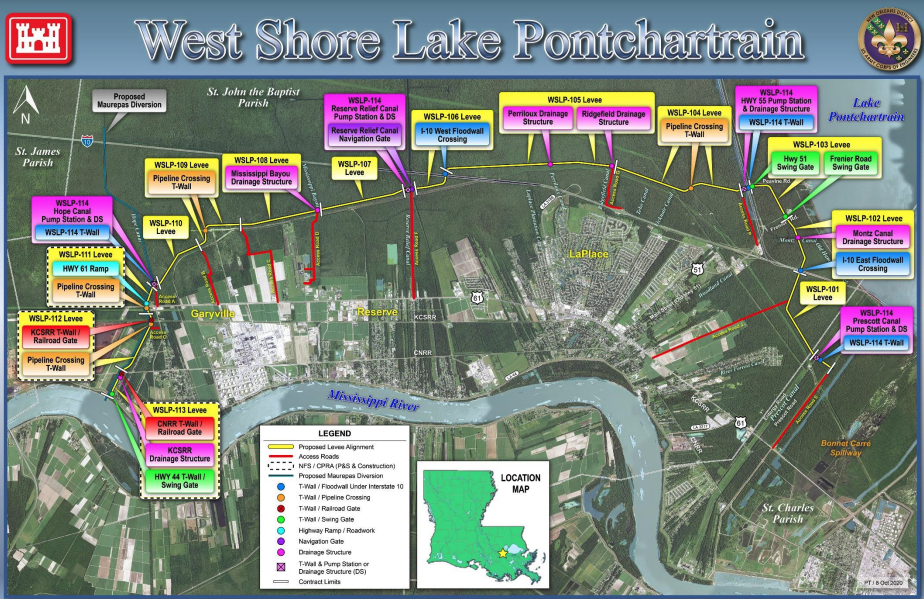 LAPLACE — West Shore Lake Pontchartrain Levee construction is anticipated to begin in the second half of 2022, according to the latest stakeholder update from the U.S. Army Corps of Engineers.

The completion of access roads is critical to move the $760 million Levee Project from the design phase to construction and achieve 100-year storm surge protection to more than 60,000 residents across St. John the Baptist, St. James and St. Charles parishes. Senior Project Manager Bradley Drouant said the goal is to have detailed designs completed so contracts may be awarded as roads become ready for use.

Work is underway on access roads A, B and C, all located north of Garyville. However, there may be delays with access roads D and F, the latter of which is needed to construct a pump station at the Reserve Relief Canal.

Before construction contracts can be awarded for access roads, the Pontchartrain Levee District must grant the Army Corps of Engineers an authorization for entry (AFE) signed by an assigned judge of the 40th Judicial District Court.

According to the December 1 stakeholder update, if this does not happen by the time the bid price expires on December 23, the work will need to be renegotiated or re-advertised with the potential for delays in road construction, pile load tests and pump station construction.

Ongoing litigation involves a dispute over 364 acres of land owned by Nature Land Co. LLC. The Pontchartrain Levee District, a non-federal sponsor of the West Shore Levee project, went before the 40th Judicial District court in November to expropriate the land for $492,800.

Earlier this year, Nature Land filed a lawsuit claiming the state’s involuntary expropriation laws are unconstitutional. According to the suit, the proposed West Shore Levee alignment would limit access to half of Nature Land’s property and decrease the value of the other half, hindering future business operations.

Nature Land has previously allowed access to its property for soil testing and other steps to prepare for the West Shore Levee Project. The company had not set a value on the land prior to the Pontchartrain Levee District’s expropriation request to the court. An attorney for Nature Land stated that the company recognizes the importance of flood reduction projects and that the dispute is not over the value of the land, but making sure the government approaches the process fairly.

Division A Judge Vercell Fiffie of the 40th Judicial District Court in Edgard denied the Pontchartrain Levee District’s expropriation request on November 24. A joint hearing on December 17 will delve further into Nature Land’s lawsuit and the expropriation request. To allow time for both parties to negotiate, Fiffie ordered that levee builders cannot access the Nature Land property for 30 days.

While the start date for access roads D and F remain uncertain, work is moving forward on other sections of the levee. Drouant said upcoming levee contracts will likely involve sand placement to bring the future levee base out of the marsh. The sand placement would begin along the areas closest to Lake Pontchartrain, utilizing Frenier Road and Access Road J near the Old 51/Riverlands subdivisions.

According to the December 1 update, these plans are in 95% review. The contract award is anticipated in the first quarter of 2022.

As of now, pile load test contracts are expected to be awarded in late March 2022.

All remaining contracts are expected to be awarded in 2022, with the exception of contracts for the pump stations.

As announced in the October update, the U.S. Army Corps of Engineers has altered plans for pump stations along the levee alignment. The project will move forward with pump stations at the Reserve Relief canal and at I-55 for a combined capacity for pumping 4,000 cubic feet of water per second. The West Shore Levee feasibility report previously called for a combined pumping capacity of only 2,150 cubic feet of water per second.