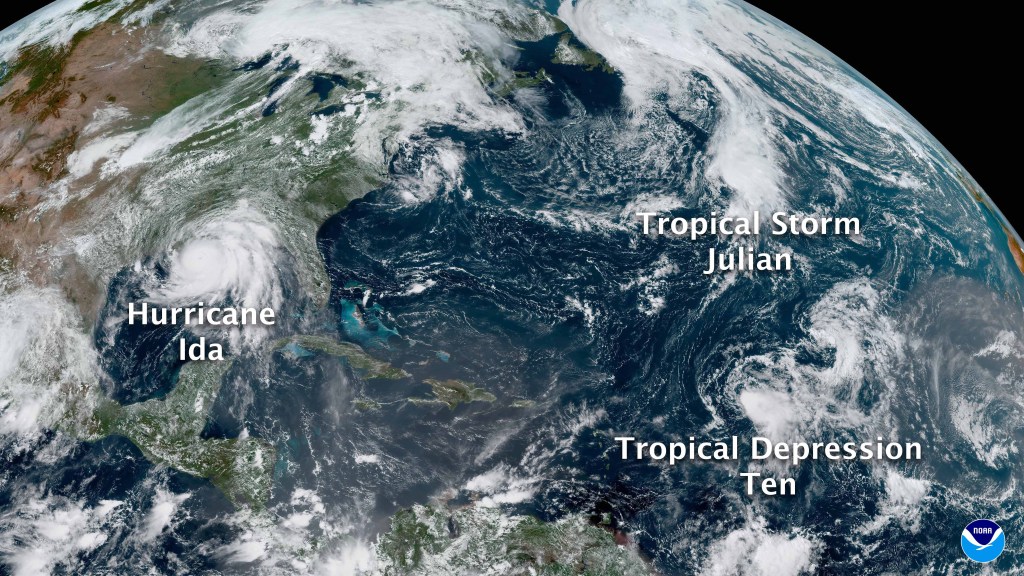 The active 2021 Atlantic hurricane season officially concludes today having produced 21 named storms (winds of 39 mph or greater), including seven hurricanes (winds of 74 mph or greater) of which four were major hurricanes (winds of 111 mph or greater). This above-average hurricane season was accurately predicted by NOAA’s Climate Prediction Center, a division of the National Weather Service, in their May and August outlooks.“NOAA provided the science and services necessary to protect life and property before, during and after storms all season long,” said NOAA Administrator, Rick Spinrad, Ph.D. “From essential observations to advanced warnings to critical response actions, NOAA supports communities so they are ready, responsive and resilient to the impact of tropical cyclones each and every hurricane season.” Scientists attribute the heightened hurricane activity in recent years to the warm phase of the Atlantic Multidecadal Oscillation that began in 1995 and favors more, stronger, and longer-lasting storms. The Atlantic Multidecadal Oscillation is thought to be driven by a combination of internal climate variability and changes over time in small air-borne particles, often referred to as aerosols, over the North Atlantic. However, the relative contributions of internal variability and aerosols to the observed Atlantic Multidecadal Oscillation remain uncertain. Additionally, the Intergovernmental Panel on Climate Change’s Sixth Assessment Report, released in August 2021, projects with high confidence that the global proportion of tropical cyclones that reach very intense (category 4-5) levels, along with their peak winds and rainfall rates, are expected to increase with climate warming at the global scale. “The hard-working forecasters at NOAA’s National Weather Service weather and water forecast offices and national centers, along with the National Hurricane Center, provided reliable forecasts and advanced warnings around the clock to safeguard communities in the pathway of destructive storms throughout this active hurricane season,” said National Weather Service Director, Louis W. Uccellini, Ph.D. “Their dedication and service are a recognized asset to the nation’s resilience to these extreme events.”

This season’s storm activity started early and quickly ramped up, as it was the seventh consecutive year with a named storm forming before the official start to the season on June 1, and held the earliest fifth named storm on record. As to why, Matthew Rosencrans, lead seasonal hurricane forecaster at NOAA’s Climate Prediction Center says, “Climate factors, which include La Niña, above-normal sea surface temperatures earlier in the season, and above-average West African Monsoon rainfall were the primary contributors for this above-average hurricane season.”

Scientists at NOAA’s Atlantic Oceanographic and Meteorological Laboratory successfully deployed five new extreme weather Saildrones to collect data at the ocean and atmosphere interface in the Caribbean and western tropical Atlantic. One uncrewed Saildrone captured the first ever video and measurements at the surface of the ocean during a major hurricane, withstanding 125-mph winds and 50-foot waves during Hurricane Sam. This data combined with data from other Saildrones, ocean gliders and aircraft-released sensors is helping NOAA to better represent the conditions that drive hurricanes within forecast models.

NOAA aircraft flew more than 462 mission hours to support hurricane forecasting and research. Data collected by these high-flying meteorological laboratories help forecasters make accurate storm predictions and allow hurricane researchers to achieve a better understanding of storm processes, which ultimately improves their forecast models. Thanks to data from these aircraft, NOAA satellites, and other sources, the National Hurricane Center accurately forecasted Hurricane Ida  — which is tied for the fifth strongest hurricane to ever make landfall in the United States — hitting Louisiana as a major hurricane.

Since the launch of the storm surge warning and new inundation mapping in 2017, there have been 16 U.S hurricane landfalls, of which seven were major hurricanes. During this period, there are only seven known direct fatalities attributed to storm surge in the United States. In 2021, only one life was lost due to the storm surge accompanying the eight landfalling storms. Additionally, the delivery of Impact-Based Decision Support Services to NOAA’s core partners throughout the season helped communities better prepare for and respond to landfalling hurricanes.

The 2022 hurricane season will officially begin on June 1. NOAA’s Climate Prediction Center will issue its initial seasonal outlook in May, but now is the time to make sure your family is Weather-Ready by preparing for the season ahead.