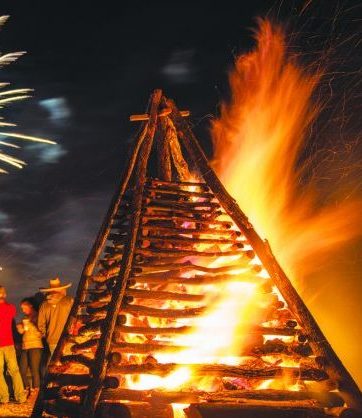 (Baton Rouge, LA) – This December, explore the history of the Christmas bonfires on the levee and Louisiana’s Wild West past. Travel around Louisiana to see places found in The Green Book and learn about a soul icon that helped solidify our place on the musical map. This December, Louisiana Public Broadcasting (LPB) explores new stories and returning favorites throughout the month.

Here are some of the highlights:

PAPA NOEL: THE LEGACY OF THE LEVEEE BONFIRES – Wednesday, Dec. 1 @ 7:00 PM
This ritualistic Christmas Eve celebration, which dates to the 1800s, is told through personal interviews and storytelling sessions as the people of St. James Parish share a tradition that has been passed down generation after generation. Filmmaker Mark Niedelson was researching the bonfires when he ended up in the Gramercy police station. Unsure of what he had done wrong, Niedelson was greeted by the mayor, a man with a big smile and hands the size of baseball mitts! “He said, ‘Hi, I’m Ronald St. Pierre and I’m the King of the Bonfires!’ That’s when I knew I was going to be telling this story.”

IRMA THOMAS: THE SOUL QUEEN OF NEW ORLEANS – A CONCERT DOCUMENTARY
Saturday, Dec. 4 @ 7:00 PM This captivating one-hour concert documentary highlights the successful life and career of the legendary New Orleans Soul Queen and Grammy-award winner Irma Thomas. Enjoy a candid interview with one of New Orleans’ most celebrated music icons as well as never-before-seen footage of Irma in concert with songwriter, producer and arranger Allen Toussaint. Irma’s close friends and contemporaries tell the story of her humble beginnings in Ponchatoula, her days living with her grandparents in Greensburg, how she sang in the Baptist church choir as a young girl, and how she quickly rose to national stardom. Says Irma Thomas: “’The Soul Queen’ is a nice title. I appreciate the thought and energy that went into that honor, but I don’t get hung up on the title. You know, I’m just Irma!” Encore: Monday, Dec. 6 @ 9:30 PM

NO MAN’S LAND LPB Monday, Dec. 6 @ 7:00 PM It’s a story of outlaws, bandits, pirates and brave pioneers and it all happened right here in Louisiana in a place that was fittingly known as No Man’s Land. Slow to be settled, and marked by a pivotal moment in history, the Neutral Strip (as it was sometimes called) was used as an official buffer between Louisiana and Spanish Texas for years.  The film explores western part of the state as a separate folk region made up of groups – like Native Americans, remnants of early Spanish colonies, Scots-Irish pioneers, African Americans, and others – who, to this day, fiercely hold on to their multi-generational traditions and notions of identity. Emmy Award winning filmmakers Bill Rodman and Flo Ulmer-Rodman explore how No Man’s Land is best understood as a bastion for those cultural groups who wished to preserve the unique way of life they cherished. Encore: Thursday, Dec. 9 @ 9:00 PM

SAFE HAVEN: EXPLORING LOUISIANA’S GREEN BOOK LPB Tuesday, Dec. 14 @ 7:00 PM LPB brings this digital-first series to broadcast as we explore the Louisiana businesses and places found in The Green Book. The guide made travel possible for African Americans during the Jim Crow era. The program is hosted by LPB’s Kara St. Cyr, who traveled across Louisiana visiting historically significant businesses and places, from Shreveport to New Orleans and points in between.  Encore: Monday, Dec. 27 @ 8:00 PM

Along with these premieres, LPB will broadcast a number of returning favorites throughout the month.

“We are excited to showcase these four new documentaries and some viewer favorites this holiday season,” says LPB Director of Programming, Jason Viso. “We are offering viewers a wide range of options that are both entertaining and educational.”