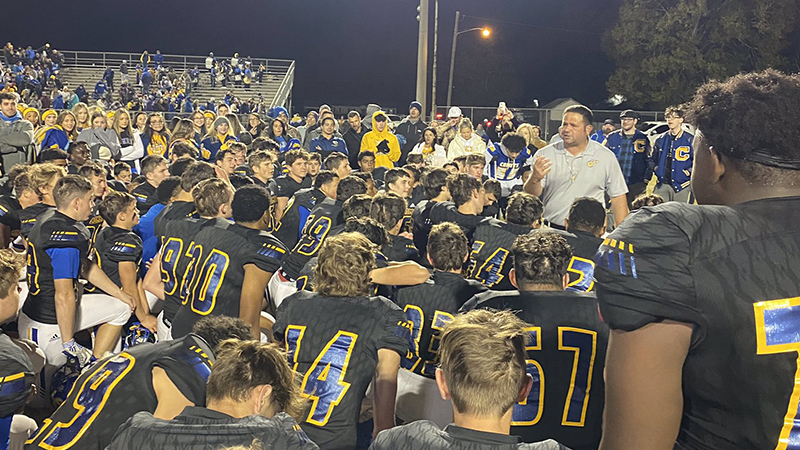 After a long kickoff return by Kaden Foster that put the Comets in pristine field position, Zack Vicknair made a 1-yard run for the touchdown. Just like that, the Comets were leading 7-0 at 9:13 in the first quarter. However, a 74-yard trick play by the Pioneers evened out the scores in less than two minutes and the game was tied 7-7, which continued on until the end of the quarter. The start of the second quarter, St. Charles’ Zack Vicknair scored again at 9:17 in the quarter which made the score 14-7. Only this time, Notre Dame did not answer immediately and both teams seemed to go back and forth up and down the field. Both team’s offense and defense made considerable contributions, which led to no more score for the rest of the half.  Despite yardage given in penalties, the Comets finished the first half in the lead 14-7 over the Pioneers.

Going into the third quarter, the Pioneers reverted back to their running game and managed to score, making it score 14-13 after a missed field goal. The Pioneers may have dominated the field in the third quarter, but Comets came into the fourth and proved to Notre Dame that they wanted to go to the finals. The Comets started off the fourth quarter with a field goal, making the score 17-13.  The Comets caught an interception, but it was ruled a flag for interference.  The fourth also brought many more penalties for both teams, playing under the intense defensive pressures. Another interference call against the Comets with3:01 left gave the Pioneers a glimmer of hope for a victory. The Pioneers continue to gain yards and march down the field closer to the goal line. The Comets defense without fail continued to put the pressure on the Pioneers who could not seem to make the plays to make the touchdown. A big sac by Kaiden Jones stopped the Pioneers from making a major touchdown play.

The Pioneers tried to make a final touchdown but just could not get past the Comet defense. The Comets intercepted with 28 seconds and solidified their chance in the finals.