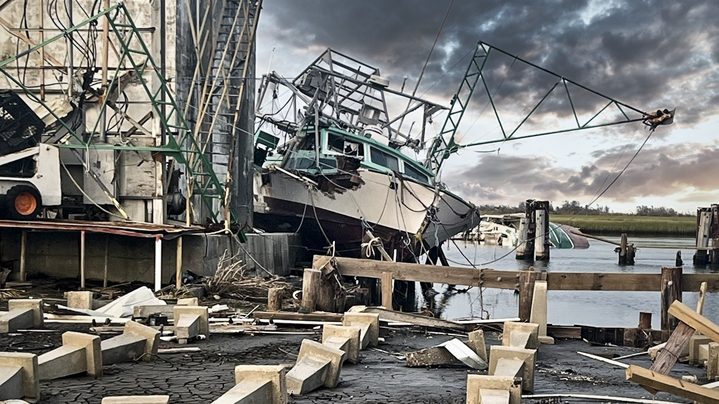 Louisiana Sea Grant and LSU AgCenter have partnered with the Louisiana Department of Wildlife and Fisheries to compile an economic assessment of fisheries infrastructure damage from hurricanes that have devastated one of the State’s largest industries during the past two years.

““During the past two years the State’s seafood industry has been drastically affected by storm damage, from one end of the coast the other.  The objectives of this assessment is to compile accurate information that can be used for the recovery of the seafood industry from hurricanes in 2020 and 2021, including Ida, Laura, Delta and Zeta,” said Sea Grant and AgCenter’s Rex Caffey.

Caffey, an economist by training, explained that in recent years recovery funds have been constrained to a NOAA-based “revenue-only” approach of a 35% threshold to trigger fisheries disaster declarations and financial aid. The mapping method estimates both revenue, as well as infrastructure losses, and was also used to measure the impacts of Hurricanes Gustav and Ike.

“This model methodology was originally developed after Katrina and Rita.  It was greatly beneficial to the partnership of more that 15 organizations that went to Washington to seek funding for the damage caused by the storms,” said Harlon Pearce, Gulf Seafood Foundation board member and leader of the new Louisiana Fishing Community Recovery Coalition (LFCRC).  “In a sense the ‘band has been put back together’ to get this information in front of our Congressional delegation, as well as NOAA. We are awaiting anxiously the data that Louisiana Sea Grant, LSU AgCenter and Wildlife and Fisheries compile.”

The report being developed by an economic working group at LDWF and LSU, will be available to all interested parties at no cost.

The five-step method developed by Caffey and partners Hua Wang and Huizhen Niu of LSU, and Jason Froeba and Jack Isaacs of LDWF, is designed to evaluate damage caused by both wind and tidal surge.  The process includes:

Important for Seafood Community To Fill Out Survey

“I can try and explain the complete process but I haven’t got my elevator pitch quite down. Basically it will give us a better understanding of the relationship between wind speed and surge depth and the causal damage inflicted on the seafood industry,” Caffey told Gulf Seafood News.  “It will provide stronger validation for ongoing efforts to secure Louisiana-specific aid, not only for Ida and Laura, but for future storm disasters.  It is important that everyone involved with our seafood industry that has suffered any damage, great or small, during the past two years fill out the survey.”

The assessment will not be able to measure all the specific damages of an individual business, but instead will focus on quantifying the relationship between business types, their locations, and storm intensity.

“We might get some feedback saying ‘you didn’t ask about this, or you didn’t ask about that,’ but it is more important for this survey to focus on the bigger picture instead of the small details,” he said, explaining the closer to the wind and surge field the more damage is to be expected. “We can’t possibly cover every single thing from every single person.  What we need to know is how the whole industry infrastructure has been affected.”

Once the survey data is compiled it will be sent to Wildlife and Fisheries to be coordinated with the value data on file of infrastructure for each location.  “The difference between the ‘on file’ data and the newly complied hurricane damage assessment will produce a monetary figure that can be used by various organizations to seek financial relief,” he explained.

State agencies cannot lobby for financial aid. The report will be for anyone wanting an archival record of the economic damages caused by the four hurricanes during the past two years.  The audiences will vary; the industry itself, Wildlife and Fisheries, both state and federal legislators, as well as the new Louisiana Fishing Community Recovery Coalition, who plan to take it to Washington as they did after Katrina and Rita.

“It is important for everyone suffering storm damage during the past two years in the seafood community fill out this report,” said Sea Grant agent Rusty Gaude, who serves the Lafitte area that was almost completely destroyed by Ida.  “This team has worked hard to produce a critical thinking report giving our State’s seafood providers a defensible position on the amount of damage the industry has suffered.”

The economic working group hopes to have final numbers from the survey compiled by Mid-January.

“When finished the report will be approximately 15-20 pages with a lot of graphics, tables and final numbers on infrastructure and revenue losses,” said Caffey. “There will also be resource loss estimates provided by Wildlife and Fisheries biologists.  Hopefully the report will be influential in the recovery of one of our State’s most valued treasures, our seafood industry.”