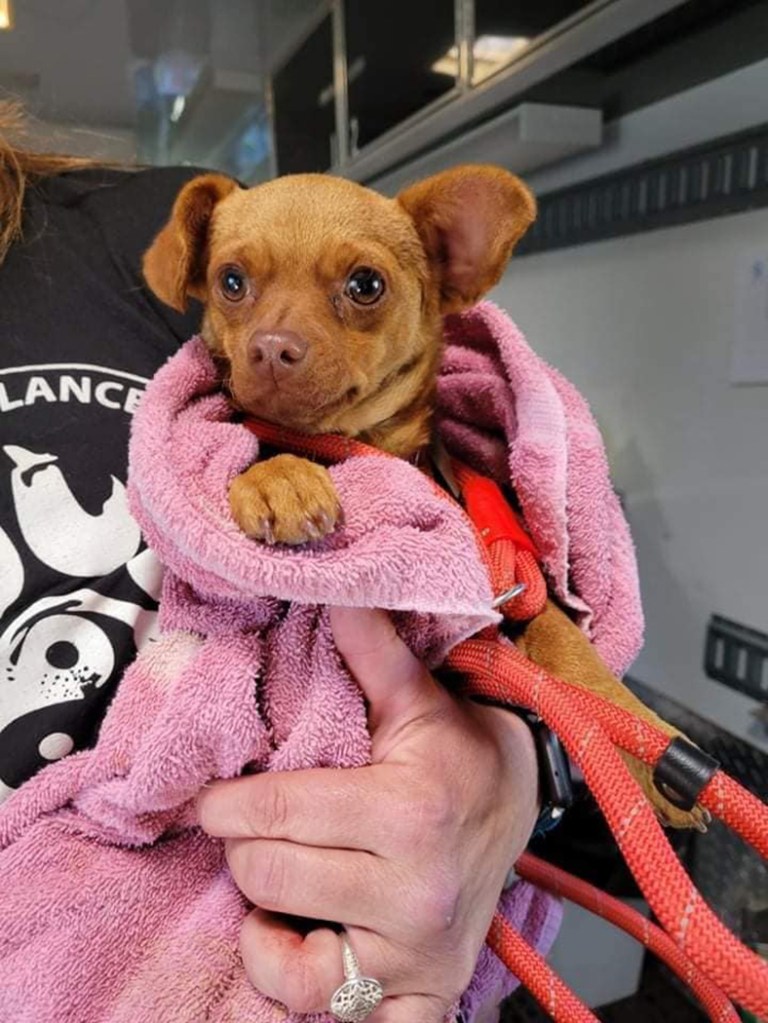 (Editor’s Note: This story from the Louisiana Humane Society has been updated to reflect the series of events that led to the dog’s rescue.)

MONTZ – Melissa Dillon Seal, an animal control officer for St. John the Baptist Parish, was en route to help a fellow officer on a call this past Saturday at 11:45 a.m. when she realized that the traffic on the Spillway Bridge, which she was crossing, had stopped.

Not long before, Glen Mixon of Destrehan and his fiancee were crossing the Spillway Bridge, traveling toward Hammond, when they spotted a little dog running in and out of traffic. By the time Mixon circled back to help, Seal had also spotted the dog and stopped to help.

Mixon parked behind her in the right lane of the bridge to stop oncoming traffic, exited his vehicle, and ran over to help.

Soon after being notified, St. Charles sheriff deputies arrived on the scene to direct traffic away from the frightened dog, which was hiding under the carriage of a stopped vehicle.

“The dog was very scared and nervous of all the traffic and people around,” Mixon recalled. “My fiancee handed us some snacks to try and get the dog to come to us. The animal rescue lady handed me a leash to try and put over him.”

Mixon got halfway under the police cruiser, while Seal got on the other side. It took more than a half hour to get close enough to touch the frightened dog.

“After 30-45 minutes, the dog finally got close enough to me and bit my thumb. As bad as it hurt, I let him hold my thumb so I could get the leash on him. I knew if I pulled my hand away, he would try to run, so I let him bite down on my thumb,” Mixon said. “I pulled him out from underneath the police cruiser and handed the leash to the animal rescue. One of the officers took me to their cruiser to put alcohol on the bite. I thanked her, and then I was on my way.”

Seal safely returned to her vehicle and brought the chihuahua mix back to the St. John Animal Shelter, where they will place it up for adoption if no one claims her. The Humane Society of Louisiana, to help identify the person who abandoned the dog, is offering a $500 reward. Those with information on the owner or caretaker’s identity are encouraged to call the Humane Society at 1-888-6-HUMANE (486-264). The Humane Society will share all tips and leads with the St. Charles Sheriff’s Office.

Both Seal and the Humane Society are very concerned that releasing dogs and cats in traffic is becoming a common problem in Louisiana. The Humane Society receives reports of cats being thrown out of moving vehicles on a regular basis. It appears that owners deliberately release the animals in traffic to avoid finding them homes or taking them to a local shelter, where they could be adopted. Apparently, it is easier for some owners to let the animal be hit by a car and die rather than find it a new home, according to the Humane Society.

Though most shelters and rescues are overflowing with unwanted pets, especially after Hurricane Ida, dumping and/or abandoning animals is illegal. There are much safer and more humane ways of surrendering an animal. Call your local shelter and ask for help or suggestions on the safest way to do so.
“We are glad to help, but throwing a living being out of a moving vehicle is inexcusable. Reach out for help,” said Seal.

To honor this heroic effort in safely capturing the little dog, the Humane Society has sent a $100 Petco gift card to the St. John Animal Shelter and asked that the donation be used to purchase supplies for the facility.

One of the largest animal protection agencies in the state, the Humane Society was established in 1988 and responds to thousands of calls for assistance each year. For more information, please visit its website at www.humanela.org or its page on Facebook: https://www.facebook.com/HumaneLA.