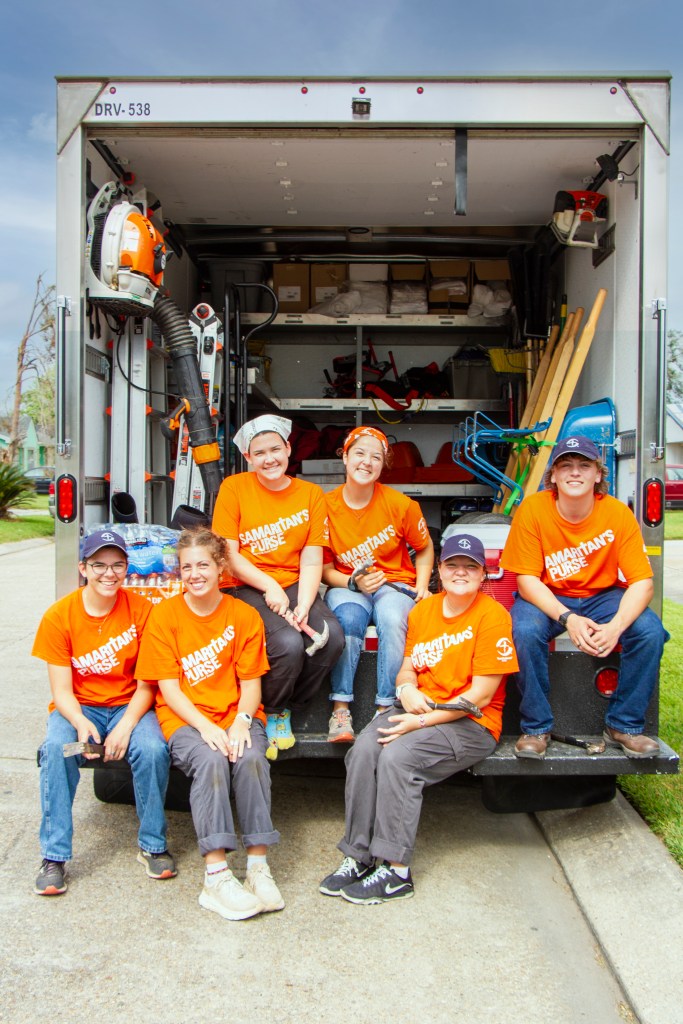 LAPLACE — Ria Hilken, 78, said “it was like a miracle happened” when 14 young volunteers from across the country showed up at her LaPlace home to help restore the property in the aftermath of Hurricane Ida.

Over the course of two days last week, the teenagers used chainsaws to remove a massive tree that had fallen over the Hilkens’ beautiful backyard garden. Inside the home, they helped remove part of the drywall where the ceiling had caved in during the hurricane.

When it came time to say goodbye, the volunteers left Hilken with a Bible filled with uplifting, handwritten messages about the time they had spent together.

“Everything you hear about young people these days is negative, but these young people were wonderful,” Hilken said.

Hayden Lacy of Tennessee and Amelia Tabatt of South Carolina were among the teens who spent two weeks volunteering locally with Samaritan’s Purse. They are both part of The World Race, a gap year mission journey that allows recent high school graduates to grow in their faith while meeting the tangible needs of communities across the globe.

Hurricane Ida relief efforts marked the volunteers’ first opportunity to impact a community in need following five weeks of training in Georgia. Lacy and Tabatt’s team was based in Metairie and worked largely in the River Parishes, particularly in LaPlace, where devastation was widespread. Along the way, they formed bonds with the homeowners they served.

“We give just as much as we get with the homeowners,” Tabatt said. “I oftentimes find I receive more from learning their stories, especially with older people, because they have so much life experience. They like to give us advice. It was wonderful to hear Ms. Ria’s story of being an immigrant and moving here in the 1960s.”

Tabatt has always had a heart for helping others, and that call to service was inspired by her grandmother’s mission work overseas in the 1960s and 70s. After graduating from high school, she was ready to leave home and experience something new.

“I chose this program because they do a really good job of teaching people about the Lord and also making a really big impact on communities. We partner with people in the communities to really make a lasting impact instead of just coming in and out,” Tabatt said.

She added that South Louisiana was a beautiful place to start the mission journey, which will also involve several months of volunteering overseas.

According to Tabatt, this particular team of 14 volunteers did a lot of roof work, tearing out sheetrock impacted by mold or storm damage, helping individuals move their personal belongings, and cutting down trees to get yards back in order.

One resident requested that Tabatt help sort through cans of food to see what was expired.

“Sometimes we’re doing the big things such as tearing out sheetrock or fixing a roof, but we also try to make it really person. I try to do the little things because I think that’s where people feel the most loved,” Tabatt said.

Love has been a common theme for the young volunteers.

Coming out of high school, Lacy decided a gap year program would be the best fit for him rather than diving straight into college.

“It was, at first, more of a travel opportunity for me. Over the course of these two months, it’s really given me the opportunity to dig into my relationship with God,” Lacy said. “While coming down here and helping with some of the disaster from Hurricane Ida, it’s been a very cool experience to see that we can bring so much hope with what we’re doing. It’s been a really fulfilling and fruitful experience.”

Lacy said the main goals are to give the homeowner the opportunity to move back into their home and try to alleviate the stress that comes with the rebuilding process.

“We tend to sign the Bible at the end of the job because it really gives us an opportunity to build those relationships with the homeowners first, so we can say ‘thank you’ in a deep and meaningful way. We get to pray for them, and that’s really cool,” Lacy said.

The volunteers have since returned to Gainesville, Georgia and are preparing to head out to Costa Rica on November 5 to work with children and serve the community through the holiday season.