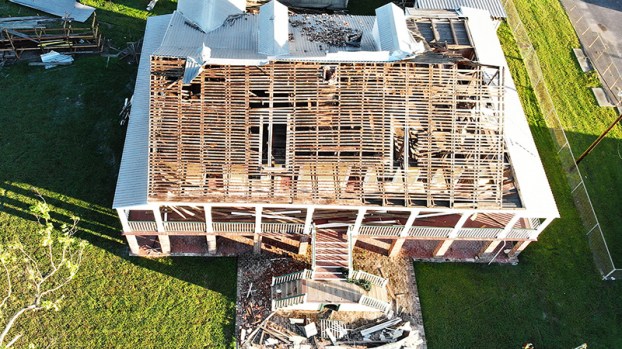 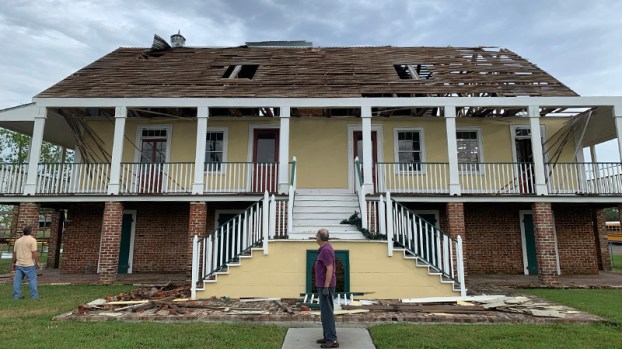 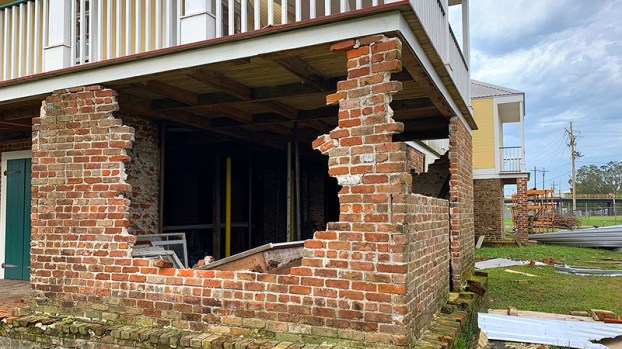 RESERVE — In recent years, the Godchaux-Reserve House Historical Society has worked diligently to restore a piece of history that spurred the development of Reserve as a hub for the St. John the Baptist Parish sugar industry in the 1800s.

The multi-phase restoration has been heralded as “triumph in spirit and optimism over neglect and indifference,” but that progress took a step back when Hurricane Ida’s brutal winds caused extensive damage to the structure on August 29.

Lenny Pousson of the Godchaux-Reserve House Historical Society said Ida’s strong, easterly winds pushed into the attic and ripped off the side of the roof facing the Mississippi River. While the tin roof was added to the structure in late 2016 as part of the restoration process, the wood that lies underneath is original to the historic structure.

Some of the bricks failed on the first story during the storm, and the chimney collapsed on the side facing Airline Highway. Hurricane Ida also removed a dormer in the front of the house, as well as one of the decorative pieces at the top of the roof. Historical Society President Stephen Guidry was able to locate the decorative piece, but by the time he returned to pick it up, it had already been stolen.

As rain continues falling inside the building, Pousson said the Historical Society is waiting for a contractor to provide a quote to repair the Godchaux House and the neighboring Haik Store, another historic structure that was relocated to the site to serve as an office building and visitor center.

“The outside of the (Godchaux) house had been restored, and the inside had been stabilized but not yet restored,” Pousson said. “Our idea is to take each room and match them to the timeframe of the owning families. We’ve paused on the Godchaux House, and we’ve been focused on the old Haik Store that was donated to us. Hurricane Ida took half of its roof off, too.”

Remembered as an integral part of community life from the late 1920s through 1980, the Haik Store was a popular dry goods shop offering fabric and clothing for men, women and children. Courtney P. Millet and Susan P. Campbell, granddaughters of one of the original owners, donated the building to the Historical Society in 2019 to keep their grandparents’ giving spirit alive.

The office building along River Road that currently houses the St. John District Attorney’s Office was also donated to the Historical Society. Collecting rent is one of the ways the Historical Society funds the Godchaux House preservation project, along with fundraisers that were held annually prior to the COVID-19 pandemic.

The office building also sustained roof damage during the storm, along with fence damage. Godchaux-Reserve volunteers plan to replace the fence by hand to save money on insurance deductibles.

Pousson said the Historical Society intends to move forward with the Godchaux House restoration once repairs are complete. However, repairing a historic structure isn’t as simple as fixing a roof on a 21st Century home.

“It’s not like a normal house. It’s a little unique when it comes to an adjuster figuring out the worth of it. We want to stay true to the original design of the wood. Stephen Guidry has a saw mill, so if we have to recreate some pieces of cypress, we’ll try to do that,” Pousson said.

The oldest parts of the Godchaux House were constructed using a combination of colombage and bousillage methods, which were abundant in South Louisiana during the 17th and 18th centuries as a substitute for solid wooden walls.

The community has gotten involved by participating in weekend clean-up days at the site, as well as football pool fundraisers. Additional fundraisers will be forthcoming, but Pousson said donations are always welcome at www.godchauxhouse.com/donations.

Built in 1764 by settler Jean Baptiste Laubel, the Godchaux House was originally a two-room structure that was expanded over the years.

The house passed through several owners over the years, including free people of color Jean Baptiste Fleming and Jeannette Teinter and brothers Francois and Elisee Rillieux. It eventually became a part of the sugar refinery owned by Leon Godchaux.

“Reserve has a lot of rich history. The Godchaux family has reached a lot of people, and we want to preserve that history,” Pousson said.