It’s a weird world in the woods 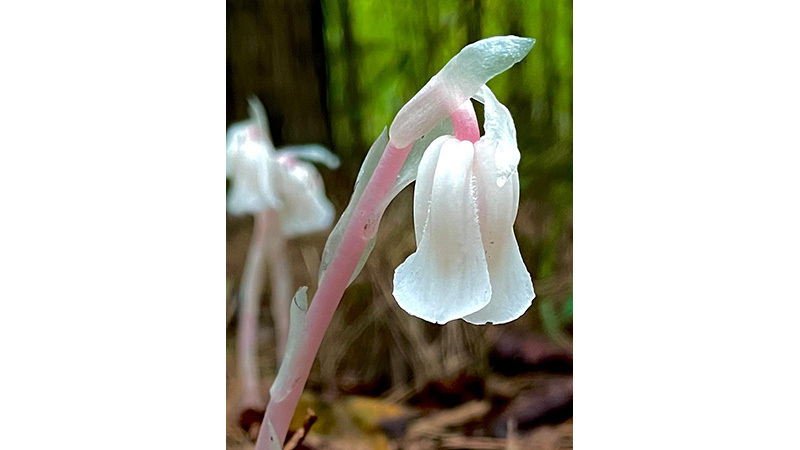 Weird things are popping up in the woods this time of year, including one of the most amazing of all: a pale white, see-through parasitic plant that looks like a mushroom but is actually a close relative of blueberries.

I adore mushrooms in the garden, even cultivate a few in my garden’s shaded “stumpery” which is a deliberate collection of upended gnarly stumps and decaying logs that coddle hostas, ferns, and other woodland plants. But this time of year I often go for long walks in the woods to see more. And because of good rains, this year there are plenty.

Not talking about lichens, those frilly Frankenstein-like mashups of algae and fungi. Because they appear thickly on trunks and branches of trees and shrubs that are in decline, they look like they are killing plants, but they grow on, not in plants, and can be found even on rocks and tombstones. They merely indicate a plant is struggling or very old and can use pruning or fertilizing. No need to spray or anything. Ignore, or better yet, admire and celebrate them.

By the way, reindeer eat lichens; never know when Santa’s team will need a quick snack.

There are other unconventional native plants, from emerald green real mosses to the Southern Goth tree-draping bromeliad we call Spanish moss. And how about wetland-native pitcher plants that get nutrients from dissolved insects trapped in their tubes? Peculiar barely covers these vegetative oddities.

None seriously harm living plants, unlike true parasites that actually grow roots into and feed off other plants. Mistletoe is one that upsets people more than trees. Because its roots wrap around underneath its host plants’ bark, it is very hard to control without killing the limbs, too. So, after watching decades-old mistletoe balls three feet in diameter growing peacefully on ancient oaks in England, I simply ignore them.

Dodder, another distinctive parasitic leafless plant, looks all the world like orange vermicelli draped over roadside shrubs and wildflowers and sometimes even on garden flowers. It twines around and inserts root-like structures into stems; the only good control, other than repeated pulling, is to remove infested plants.

But this fall I’m seeing a plethora of fungi pushing up “fruiting bodies” (their versions of flowers). Gilled mushrooms, toadstools, shelf fungi sticking out from tree trunks, round puffballs, jelly-like masses, and more come in an astounding array of beautiful shapes, sizes, and colors from oyster white to nearly black, brilliant yellows, reds, and some with spots and other markings. There’s a really nasty looking, smelly one called “stink horn” popping up now in mulched beds.

Coming and going with the weather, most are harmless, just natural fungi taking care of nature’s business. No need to spray, just enjoy, or kick them over.

Back to what I first mentioned, a truly bizarre plant that I finally found after searching for decades. Native “ghost pipes” grow in scattered little colonies in deep woodland shade, and look like spectral mushrooms. The plants lack chlorophyll so they are unable to make their own food; they get their nutrients as parasites on special wild fungi that in turn live on the roots of woodland trees and shrubs.

But they are not mushrooms, they are actually flowers of a rare leafless relative of blueberries, huckleberries, and heathers whose flowers, pollinated by bees and flies, are nodding bells on short stalks, all ghostly waxy white, sometimes with flecks of pink, and translucent petals you can see through.

It’s a weird world for those who get out into the woods and look down. Just watch for ticks, snakes, and hunters.

Felder Rushing is a Mississippi author, columnist, and host of the Gestalt Gardener on MPB Think Radio. Email gardening questions to rushingfelder@yahoo.com.