The Journey Home assists veterans in aftermath of Hurricane Ida 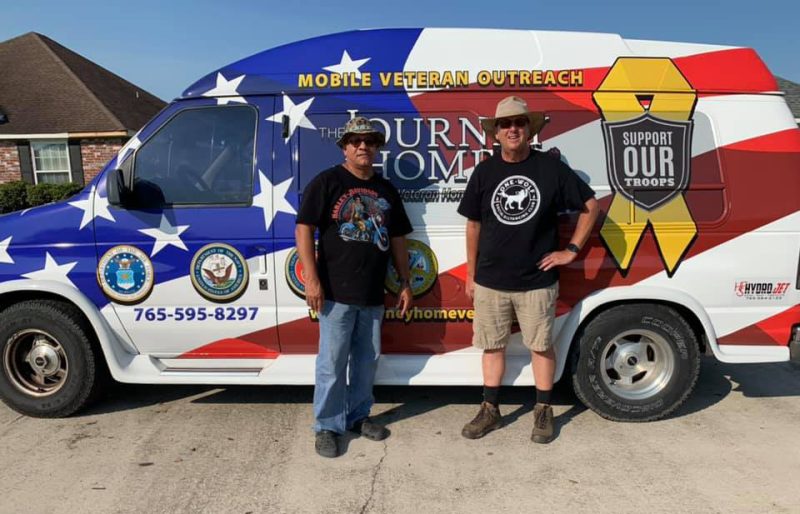 LAPLACE — There are more than 37,000 homeless veterans across the United States, and another 1.4 million veterans at risk of becoming homeless, according to latest estimates from the Department of Housing and Urban Development.
Eldon Solomon spent five weeks in St. John the Baptist Parish on behalf of The Journey Home, an Indiana-based nonprofit that engages in local, regional and national outreach to connect veterans at risk of becoming homeless with vital resources.
With Hurricane Ida leaving damaged homes and financial hardship in its wake, veterans in LaPlace and surrounding areas became vulnerable to risk factors that contribute to veteran homelessness.
After arriving to St. John Parish, The Journey Home quickly developed a partnership with First Baptist Church of LaPlace to reach community members in need. An RV command center provided a central location where individuals could come to ask for help.
Allan Reynaud of American Legion Post 383 was also able to connect Solomon with veterans in need.
“We know that homeless veterans suffer from mental illness, medical illness, PTSD, substance abuse and economic struggles,” Solomon said. “In LaPlace, there are a lot of veterans suffering from financial crisis when it comes to doing home repairs. We did a lot of work with elderly Vietnam veterans. Scammers tend to go after the elderly. We helped prevent almost $9,000 worth of scamming to veterans.”
One instance involved an 85-year-old veteran being harassed by men who showed up on his doorstep several days in a row asking for money for work that was partially completed, all the while refusing to provide an invoice.
Once Solomon got in touch with the scammers and they realized someone was looking out for the elderly man, the harrassment stopped.
The Journey Home also assisted veterans in applying for more than $200,000 in disaster relief benefits over the five weeks spent in LaPlace.
“We work with the VA and other government organizations. We are aware of what resources are available to veterans, and we are able to lead them to those services,” Solomon said. “A big part of helping is having the application in front of you, sitting down with a veteran and helping them fill it out.”
When helping veterans, it’s also important to know how to relate to them. One LaPlace resident asked The Journey Home to check up on his neighbor, a Vietnam veteran. He warned Solomon that his neighbor was a hermit and unlikely to allow anyone into his home.
It only took one look to see the veteran needed help. Three weeks after the storm, no clean-up work had taken place inside. The smell of mold filled the air, and insulation was still hanging from the roof.
Yet, when Solomon asked him his immediate needs, he said he had the house taken care of, and he only wanted help with the trees in his backyard.
“I pulled my chainsaw out and went to work. By the end of the time that I was with him, he was telling stories and opening up about a lot of anger and mistrust. He was very bitter about his experience coming home from Vietnam and how he was treated,” Solomon said.
Thankfully, that positive interaction made the veteran more apt to accept help from his neighbor, who had contractors and roofers lined up and ready to help.
“Veterans are a specialized population, and it takes specialized knowledge and relationship building. Knowing how to approach veterans and how to help them is our skill set. If we weren’t there, that one individual, in a matter of weeks, would have been homeless,” Solomon said. “Our whole philosophy and model of operation is to do what we can, lift up the local community and build relationships so we can walk this journey with the community.”
The Journey Home operates solely on private donations. In Indiana, the nonprofit operates a 15-bed facility providing transitional housing to veterans. To learn more, call 765-595-8297 or visit The Journey Home on Facebook.