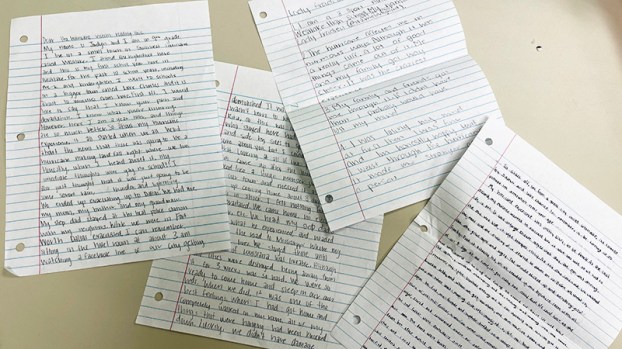 Letters were written by students from Westlake High School, located near Lake Charles. 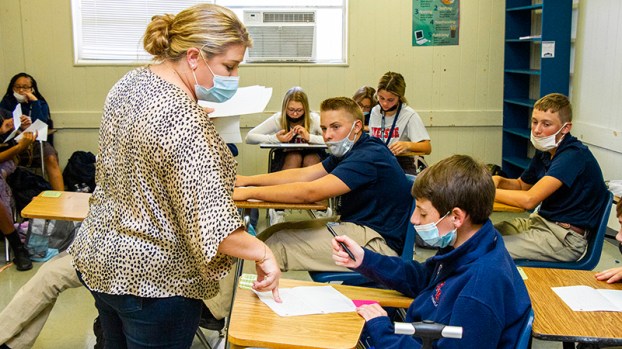 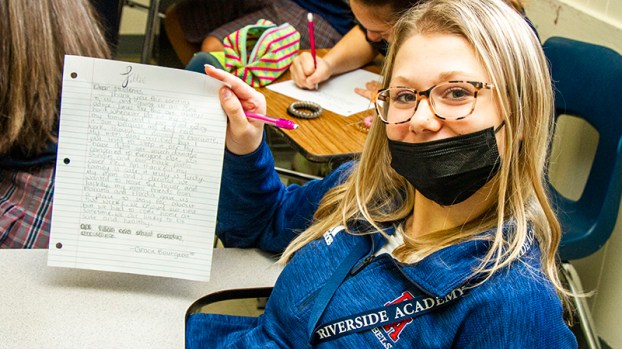 Gracie Bourgeois holds up a letter she wrote to send back to students at Westlake High School. 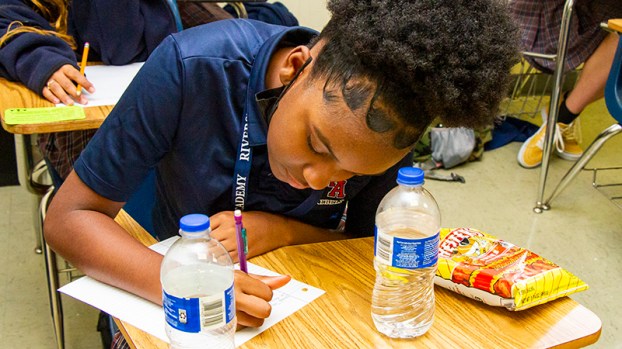 Kennedi Tate concentrates as she writes a letter explaining her Hurricane Ida experience.

LAPLACE — Seventh graders returning to Riverside Academy nearly six weeks after Hurricane Ida devastated the River Parishes realized they are not alone when it comes to facing hardship after a major disaster.

Upon returning to the classroom, students read heartfelt letters penned by Westlake High School students who were in their shoes exactly one year ago following the impacts of hurricanes Laura and Delta in Southwest Louisiana. Many of these students are only just beginning to experience a return to normalcy, but all of their letters shared the same hopeful sentiment: It gets better.

One letter read, “I watched the news, and I’m deeply sorry about the damage this hurricane has caused to your town. I went through the same thing, and it’s heartbreaking to see the town that you grew up in torn up. It may seem like there’s no way anything will be the same, but that’s not the case.”

Another stated, “I know your pain and devastation. I know what you’re thinking. However, here I am a year later, and things are so much better.”

After hearing about Hurricane Ida’s impact on Southeast Louisiana, Marse’s former teammates came together to deliver a U-Haul full of supplies, including diapers, wipes and formula for her infant son.

Havard also yearned to give back to Marse’s students by asking sophomores and juniors in her English class to share their hurricane experiences.

“Most of the schools, Westlake in particular, didn’t go back until November last year. It was such a hard year with so many things happening. Athletics and school functions were limited or cancelled. When Ida came into the Gulf, it was a fear of ours whether we were going to get hit again. When it turned and went closer to New Orleans, I just felt like we could do something,” Havard said. “Kids oftentimes relate better to other kids, and I think sometimes you are better able to process things when there are other people your age who have gone through it and survived it. We’re finally coming out on the other side and having a normal school year.”

While writing the letters, several of Havard’s students remarked that it would have been great to have support from students from another school last year. Some even put their Snapchat or Instagram handles at the bottom of the letters in case the Riverside students needed someone to talk to.

A year later, some of the Westlake students are still living in campers or with relatives, rather than in their own homes.

“Some of them are having to completely rebuild since their homes were gutted. They are still in it, but their mentality is so much better at this point than it was a year ago,” Havard said. “Time changes a lot of things. It changes your perspective. They are a lot more grateful and appreciative than they were before. I hate that it takes something like a natural disaster to bring that out, but I do think that is something good that came out of Hurricane Laura as a lot of people learn to appreciate the mundane things we take for granted.”

After reading letters from Westlake, Marse’s students wrote response letters to thank the students and share their hurricane experiences.

Riverside Academy student Kennedi Tate is doing her best to stay optimistic, just like the students at West Lake High. Kennedi’s family is currently living in an Air B&B after Hurricane Ida brought rain through the ceiling and floodwaters through the front door of her home.

“They know how bad it was, and they had to work as a community to stay strong and think positive,” Kennedi said.

Student Gracie Bourgeois said the Westlake students shared that spending time with family helped them cope after a hurricane. Meanwhile, student Eli Guidry related to the fear the Westlake students experienced during the hurricane. He felt the same fear during Hurricane Ida when he didn’t know if his family was okay, and he’ll never forget returning home to find power lines and shingles scattered all over the ground.

“I told them how my experience was. They were talking about how it was scary for them. Even though their house was messed up, they were still thankful because other people had it worse,” Eli said.

Marse found herself tearing up while reading the letters, especially when it came to the account of one student who had to move to Arkansas for a full year after the hurricanes.

Marse and her family chose to stay during the storm, partly because it would have been difficult to evacuate with two golden retrievers. During the storm, she watched her chimney fly off and hit the neighbor’s house. A waterfall started pouring through the fireplace soon after.

Marse never expected to lose ceilings and floors to the hurricane, and she’s grateful for all of the love and support shown by her former softball teammates.

“These are people I haven’t talked to in years. To see them getting together and doing that for me, I really feel loved and so blessed to have those people in my life,” Marse said.

She’s also thankful for Havard and the Westlake students for thinking of Riverside Academy in a time of need.

“It was very encouraging to see the students’ maturity and the empathy that they showed to my students,” Marse said.