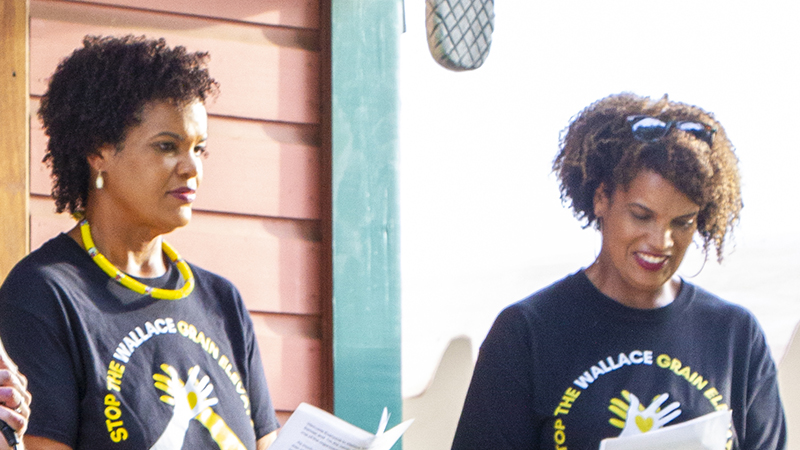 Jo and Joy Banner are organizers with the community-based "Stop the Wallace Grain Elevator" group.

WALLACE — “The Stop the Wallace Grain Elevator” group, a consortium of residents concerned about the potential for pollution, noise, traffic and risks associated with the proposed Greenfield grain elevator, won a significant battle in their fight to stop the proposed grain elevator. The Secretary of the Louisiana Department of Natural Resources (LDNR) granted residents’ petition, filed by the Tulane Environmental Law Clinic, and overruled the Office of Coastal Management’s (OCM) decision to authorize the Greenfield Grain Terminal in Wallace. Click here to read the petition and OCM’s decision. The OCM must now consider Greenfield’s application anew and address residents’ requests for a public hearing.

Greenfield LLC’s authorization was based largely on an exemption for the project’s supposed use of land more than five feet above sea level.  After the residents submitted their petition to the Secretary, Greenfield revealed to LDNR that more of the project would be below five feet mean sea level than it had represented in its application.

Stop the Wallace Grain Elevator organizers believe their complaint led the company to submit this information.

“This is a major win for the residents of Wallace. LDNR and OCM’s responsibility is to protect the safety and rights of the public from entities like Greenfield whose failure to provide accurate information puts our community in danger,” says Jo Banner, a Wallace resident, and organizer of Stop the Wallace Grain Elevator.  “I believe this information would have never seen the light of day without our petition for reconsideration.”

The petition pointed out the sheer proximity of the proposed industrial operation to where people in the Wallace community live, work and recreate. Organizers said the facility butts directly up against Wallace homes and properties – so close that it appears to violate the St. John the Baptist Parish buffer zone requirements.

Hurricane Ida exposed the importance of buffer zones around grain elevators as the storm severely damaged the Cargill Grain Elevator in Reserve. The Stop the Wallace Grain Elevator  said a grain elevator could increase the likelihood of more dangerous debris and the risk of road closure like what happened in Reserve. In addition, emergency personnel could be prohibited from using the levee in times of road closures, such as those caused by Hurricane Ida.

Organizers maintain that the community of Wallace, a Black community, already bears an overwhelming burden due to environmental racism. The fears of Wallace and other regions of “Cancer Alley” have been well-publicized and have gained the attention of the Biden Administration.

According to the American Thoracic Society: “Grain dust is complex and contains a mixture of different types of grain, insect parts, fungi, bacteria, bird and rodent droppings, pesticides and silica.” Exposure to grain dust is associated with lung damage, chronic cough, asthma, bronchitis and farmer’s lung disease.  The Occupational Safety and Health Administration has determined that grain handling is a “high-hazard industry” because of the probability of explosions from grain dust.

Those who wish to submit a comment to the Office of Coastal Management can contact jo@thedescendantsproject.com or call 225-206-1993 for instructions on how to do so.

— Submitted by “The Stop the Wallace Grain Elevator” group