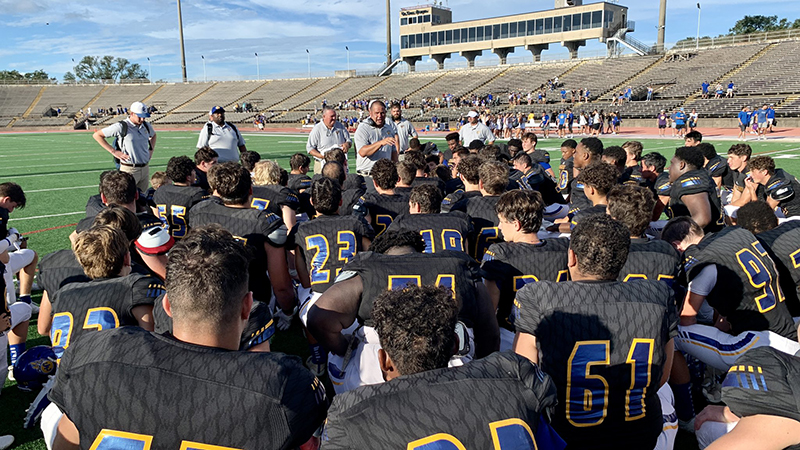 LAPLACE — St. Charles Catholic football coach Wayne Stein was reminded of the resilience of the River Parishes as he watched the Comets battle De La Salle at the Tad Gormley Stadium in New Orleans.

St. Charles Catholic ended the game with a 3-0 shutout win over the Cavaliers, signifying a grand comeback to football after the devastation of Hurricane Ida. The Comets adapted quickly after missing the first two weeks of the season and brought their best to the field on Saturday.

“Nobody’s really in great shape after taking 10 or 11 days off for Ida, but we always preached to our kids about being tougher than our opponent. At the end of the day, we kept digging deep,” Stein said. “I thought we played like our community today. Our community has been resilient since the storm, and I thought that’s what our football team resembled – the River Parishes.”

Week Three was originally scheduled to be a home game, but Ida’s damage to the lighting system in the Thomas J. Dupuy Stadium called for a location change. Stein said it was good, in a way, for the Comets to be on the road and away from everything that has been going on at home.

Lightning delayed the start of the game by an hour. Once the clouds cleared, sweltering heat set in, and both teams were fighting through the humidity.

It was a 0-0 game until mid-way through the fourth quarter, a testament to the defensive abilities of both the Comets and the Cavaliers.

Carter Chauvin made a 29-yard field goal with just over seven minutes left on the clock. De La Salle gained control of the ball late in the game, but the Comets defense was able to hold the Cavaliers to zero points.

Stein said returning starters Moses Clark and Kaiden Jones played extremely well, but the victory was truly a collective effort on the defense.

“All 11 guys played their part. To shut out a team like De La Salle takes more than one or two guys. I couldn’t be prouder of that unit. It wasn’t perfect on offense, but we found a way to move the ball and kick a field goal in the end to get the victory,” Stein said.

The Comets are looking forward to a return to normalcy as school reopens Monday for the first time since Hurricane Ida hit in late August.

However, school being closed the last few weeks did not keep the Comets from the practice field.

“We called practice in about three locations this week, and no matter where we called it, we had 100 kids show up. We made a decision to play football on a quick turnaround. It’s what they wanted, and they took full advantage of it today,” Stein said after Saturday’s win.

Next up on the Comets’ schedule is a road game against Jefferson County in Mississippi.