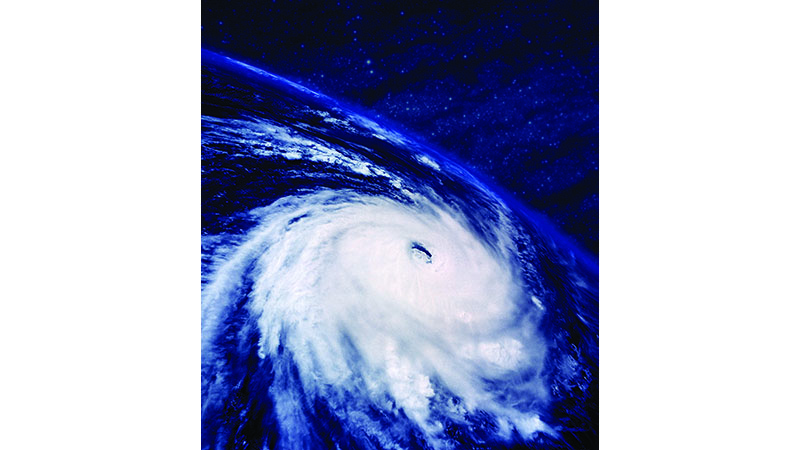 BATON ROUGE – By analyzing the temperature of the atmosphere several miles above the Earth, researchers have found a way to predict how many hurricanes may sweep through the Gulf of Mexico in the summer and fall.

These new models for Gulf hurricane prediction can help governments plan disaster responses and mitigate the danger presented by hurricanes like Ida.

“Our paper was trying to develop a specific forecast to meet that need,” said Paul Miller, LSU Department of Oceanography and Coastal Sciences assistant professor and lead author of the new study in the AGU journal Geophysical Research Letters, which publishes high-impact, short-format reports with immediate implications spanning all Earth and space sciences.

Climatologists have developed several ways to predict the intensity of the hurricane season. But most of these look at the Atlantic basin as a whole rather than just the Gulf. Geographic and climate conditions are quite different in the Gulf of Mexico, which is a sub-basin of the Atlantic.

Storms are more likely to form earlier in the hurricane season in the Gulf than in the Atlantic. At times of peak ocean surface temperatures from August to October, the storm systems are born within the Gulf and can utilize the available energy to rapidly intensify. In addition, because the Gulf is almost entirely enclosed, these storms usually involve some sort of land impacts.

These factors are why it’s important to be able to predict how many hurricanes may impact the Gulf, but up until now there has not been a good way to do so.

Miller and his co-author Jill Trepanier, LSU Department of Geography & Anthropology associate professor, examined model records kept by the National Center for Environmental Prediction starting in 2012 to look for trends that might reveal ways to predict storms in the Gulf.

They first tried to look at traditional atmospheric indicators used by the existing seasonal storm forecasts for the Atlantic region but didn’t find the usual relations and trends that work for predicting storms in the Atlantic.

Instead, they noticed a correlation between the temperature about halfway up the troposphere, the lowest layer of Earth’s atmosphere, and the number of storms. While this 500-millibar area shifts up or down depending on how warm the atmosphere is, it sits roughly about 3.7 miles above the Earth’s surface. Miller and Trepanier developed the model they used with data they gathered between 1979 to 2010.

The average temperature of this area above the Gulf predicted by models run in May can accurately anticipate how many storms are likely to come through the Gulf from June to November—the typical storm season there.

The model works a little better in predicting heavy storm seasons than average storm seasons, Miller said. For example, it more accurately predicted that an elevated number of storms would pass through the Gulf in 2020.

Miller said that the government can use this model to better prepare resources for disaster mitigation, whether it’s setting up shelters or other issues. Industries like offshore oil and gas operations can also use it to slow down operations in advance of possible stormy patches.

“We felt that this was a really important thing to do,” Miller said.