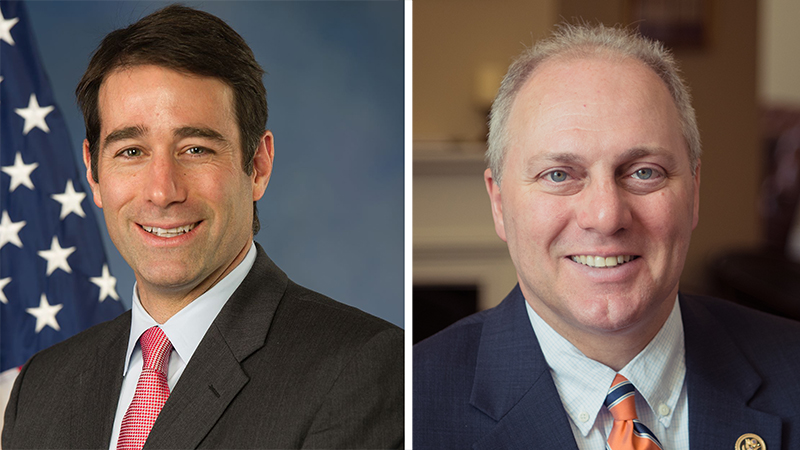 WASHINGTON D.C. – U.S. Congressmen Garret Graves and Steve Scalise are asking the Federal Emergency Management Agency (FEMA) to delay the implementation of the new National Flood Insurance Program (NFIP) rate-setting program which is set to begin on October 1, 2021. When Phase I of Risk Rating 2.0 begins on October 1, new NFIP policies will be subject to a new set of rates, with the rate changes taking full effect for all remaining policies on April 1, 2022.

“We have seen flood insurance rate spikes in St. Charles Parish that would increase 600 percent, and policies in Lafourche Parish that could jump 1000 percent based upon this new, flawed system being pushed by FEMA. We have victims of Hurricane Ida that just had their home damaged or destroyed, our communities are without electricity or internet, and you are going to spike them with a with an extra bill for $4,000 annually? As we just witnessed with the New Orleans area Hurricane Protection System, the solution is better protection not unaffordable flood insurance rates.” – Congressman Graves

“The devastation caused by Hurricane Ida and the long road to recovery in its aftermath have placed difficult burdens on Louisiana families as we work to rebuild. Especially as communities continue to recover, it would be devastating for FEMA to implement Risk Rating 2.0 and cause NFIP rates to skyrocket for some policyholders who play by the rules. We must continue working to implement long-term reforms to NFIP to ensure the program remains affordable and stable for the future.” – Whip Scalise

Click here for a PDF version of the September 14, 2021 letter, or see the full text below:

As Louisianans struggle to put their lives and communities back together after Hurricane Ida, the last thing they need to see is an increase in the rates they are charged to keep their National Flood Insurance Program (NFIP) policy. Unfortunately, that’s precisely what is on the horizon: when Phase I of Risk Rating 2.0 begins on October 1, new NFIP policies will be subject to a new set of rates, with the rate changes taking full effect for all remaining policies on April 1, 2022.

In numerous hearings, calls, letters, and briefings, FEMA has assured Members of Congress that Risk Rating 2.0 will not result in astronomical rate increases for our constituents. These claims already seemed inconsistent with FEMA’s own documents1 , which show that 80% of policyholders in Louisiana will see an increase under Risk Rating 2.0. FEMA’s actuaries have been quick to qualify, pointing to data that shows that most Louisiana policyholders will see increases between $0 and $120 per year (although, notably, none of the data shows an average length of time that policyholders should expect to bear these increases.) FEMA argues that not only will these increases stop once a property has gotten to its “actuarial rate”, but these increases are also still subject to the Congressionally-mandated 18 percent rate cap. It is worth pointing out that sky-high premiums don’t suddenly become more affordable just because you march toward it “slowly” at less than 18 percent per year.

Although FEMA has refused to disclose what the average policy premium will be in Louisiana once Risk Rating 2.0 has fully taken effect, we recently got a glimpse behind the curtain. A policyholder in Larose, LA was quoted $572 for a new policy set to take effect on September 30, 2021. When they corrected their effective date to October 8 due to the standard 30-day waiting period, their new annual premium was quoted at $5,531 – an 867 percent increase. Under the maximum allowable rate cap and starting at today’s rate, this policyholder would have seen consistent premium increases for 14 years before they hit their “actuarial rate.” Even if you adjust the math to allow for the “average” annual NFIP rate increase of 7 percent per year, this homeowner would have expected to see yearly increases beyond the life of their 30-year mortgage. Of course, it is obvious that the rate increases would continue well beyond that, as over the decades, FEMA would adjust the “actuarial rate” for the property for new risk factors and inflation. It is literally a moving target.

FEMA calls this program “Equity in Action”, but in reality, it is anything but. It is not equitable for policyholders in Louisiana to be penalized by higher NFIP premiums because they sit at the bottom of the third-largest watershed in the world, which drains 31 states and two Canadian provinces. Our citizens shouldn’t be charged because of an increase in drainage from other states and Canada. Furthermore, Coastal Louisiana has lost a record 2,000 square miles of coastal lands and wetlands, which have “exposed the state’s coastal areas to the devastating effects of hurricane storm surges.”2 The federal government has a share of responsibility here too: the construction of levees in south Louisiana and locks and dams in the upper Mississippi System is blocking the sediment that would otherwise sustain the coastal wetlands. This greater exposure to tropical storm impacts is a result of federal action through the U.S. Army Corps of Engineers, and yet, it is Louisianans who will pay the price.

Once again, we urge you to delay the implementation of Risk Rating 2.0 until such a time that Congress can address the longstanding structural and affordability problems within the program. Louisianians are expecting to see consistent rate increases for decades, and FEMA is not being transparent about it. Folks in Louisiana and elsewhere are rightly concerned that the effect of this policy will be to drive people out of the program and out of their communities.