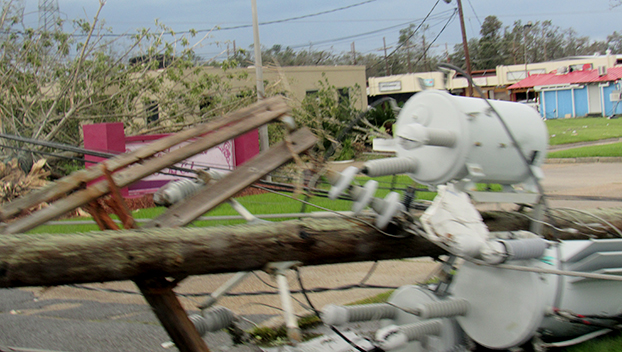 St. John the Baptist Parish is taking the first steps to recovering from significant damage from Hurricane Ida's winds, rain and storm surge.

LAPLACE — St. John the Baptist Parish President Jaclyn Hotard announced that President Joe Biden will be visiting the area Friday to observe the devastation left by Hurricane Ida, a storm that state and federal officials have referred to as “one of America’s great disasters.”

Details on the specific location, timeframe and traffic impacts associated with the president’s upcoming visit were not immediately available early Thursday afternoon. Updates will be provided.

“We were one of the hardest hit regions with rain, storm surge and wind, so we had destruction on all three levels,” Hotard said. She said the community is resilient, adding, “With prayers and unity, there is nothing we can’t collectively get through.”

While cell service is beginning to return to St. John Parish, Hotard said communications remain very limited, and it is difficult to relay information as quickly as she would like. Despite the challenges, St. John Parish managed to set up distribution sites with disaster relief supplies less than 72 hours after Hurricane Ida devastated the region.

Located at REGALA Gymnasium on the East Bank and at the Wallace Fire Station on the West Bank, these distribution sites will remain open from 8 a.m. to 5 p.m. daily until further notice.

From 4 to 6 p.m. today, Sept. 2, essential items will be distributed at East St. John Preparatory Academy’s campus on a first come, first served basis while supplies last. This distribution event is only open to St. John Parish residents.

FEMA assistance is available, and residents are asked to register online at assistance.gov or by calling 800-621-3362. According to Hotard, FEMA will also mobilize teams to go into neighborhoods and assist residents.

The St. John Fire Department, the National Guard and other first responders are also going into the neighborhoods to distribute water to residents.

She said residents are already receiving fraudulent communications and reminded locals that FEMA will never ask for your social security number over a text message. Hotard also asked residents to make sure the contractor they are dealing with is licensed. Avoid contractors who ask for full payment up front, and protect against scams by taking a photo of the contractor’s license plate.

All Interstate systems are now open. However, the Highway 51 on and off ramps remain closed at this time due to standing water.

“We are receiving a lot of calls from residents who want to know if they can come in and check on their homes. You absolutely can. We’re not closed, especially not to our residents,” Hotard said. “The curfew has been placed because there are still many low power lines throughout the parish. We don’t want anyone to get injured traveling at night. Secondly, we want to make sure we protect people’s homes as much as possible from any individuals with bad intentions.”

Three individuals have been arrested for looting in St. John Parish as of Sept. 2. More information on the arrests is available here.

Water and power restoration remains a concern for many in St. John Parish. Some residents saw water restored to a slow trickle on Wednesday, only to lose it again.

“As we begin to build pressure to our water systems, we are finding leaks that we knew would be here with a storm like this,” Hotard said. “The latest report was that we did have better water pressure on the West Bank.”

Hotard had to be honest and frank about the electricity situation — it looks like the road to restoration will be long.

“Every substation, every transmission unit, every piece of critical infrastructure as it relates to electricity has been damaged in St. John. It will be a lengthy amount of time before we can get that restored,” she said.

Hotard said local officials share in the hardships, as many of them had their cars and homes damaged during Hurricane Ida.