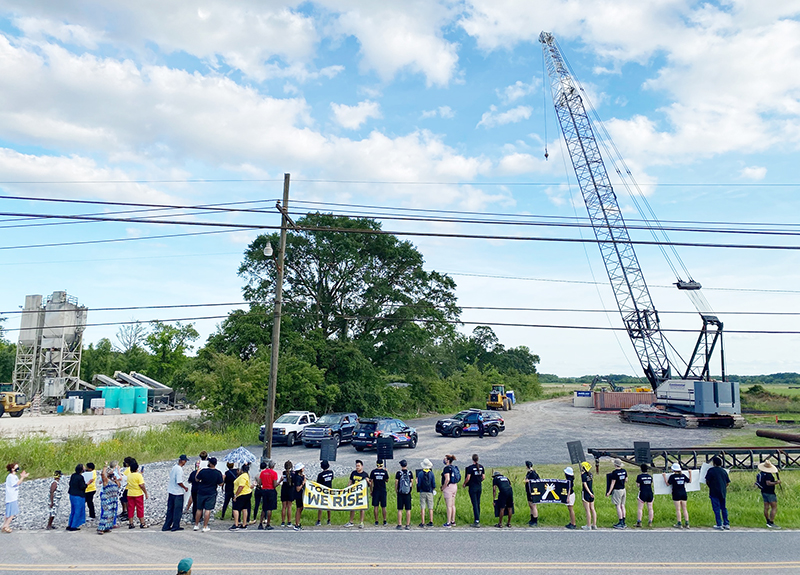 WALLACE — Organizers with The Descendants Project issued a formal complaint stating the construction of a grain terminal on the West Bank of St. John the Baptist Parish would be in violation of the Parish’s Code of Ordinances.

“Since grain elevators qualify as heavy industry, the Parish Code of Ordinances requires that the Planning Commission and Parish Council ensure a distance of 2,000 feet between land zoned as industrial district three, or I-3, and residential development. The designation of this area as I-3 is in clear violation of the ordinance,” Banner said. “We demand that this mistake be corrected.”

Representatives of The Descendants Project requested that the issue of the proposed grain elevator and the I-3 designation be placed on the next available Parish Council agenda. The complaint letter also requested that the issue of potential enslaved burial grounds in the area be placed on Planning Commission and Parish Council agendas slated for October 2021.

While Greenfield Louisiana LLC states that it has met with more than 500 community members thus far, including school representatives and Parish leaders, Banner feels that community members were left in the dark for much of the decision-making process.

She first heard rumors of a grain elevator two years ago, but she was not aware of official plans until March of this year. After becoming aware of the project, concerned residents submitted more than 300 letters to the U.S. Army Corps of Engineers and LDEQ to request a public hearing.

Greenfield Louisiana acknowledged that communities across America are striving to transition to a cleaner economy while preserving local jobs and funding for government and schools.

An August 23 email communication from the company stated, “Greenfield Exports wants to diversify the local tax base and ease the region’s energy and agricultural transition by receiving and transporting grain in a cleaner, more sustainable way while creating more than 100 direct local jobs, 500 indirect jobs, and significant local and state tax revenue.”

According to Greenfield Louisiana, air and water quality studies, wetlands assessments, archaeological investigations, cultural resource assessments and reviews of endangered and threatened species have been conducted in the area to reduce environmental impacts. In response to environmental concerns, Greenfield Louisiana maintains that it will outperform the most stringent air quality standards.

Greenfield Chief Operating Officer Cal Williams said, “This scholarship program is just the beginning of our Company’s commitment to train and hire local people to construct and operate our facility. Our goal is to create economic opportunities for the local residents but also build a long-standing relationship with the community based on trust and safety. We look forward to working with Tyrin at the Company and facility once he graduates.”