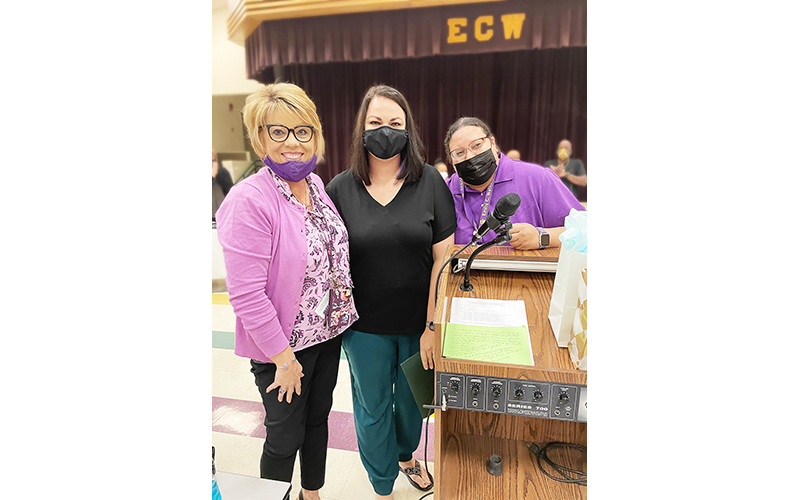 LAPLACE — The staff at Emily C. Watkins Elementary said it is nothing short of a miracle that enrichment teacher Melissa Wild is on the road to recovery after suffering a “widowmaker” heart attack in her classroom on August 4.

The medical emergency occurred on the teachers’ first day back for the 2021-2022 school year. Wild is preparing her computer literacy classroom along with teachers Kelly Sylvain and Monica Anderson when everything changed in the blink of an eye. As soon as Wild said, “I don’t feel well,” she slumped over in her chair and became unresponsive.

Wild was known throughout the school as the jokester who keeps everyone laughing, and the teachers in the room half expected her to spring back up from the chair. But the severity of the situation was clear when they realized she wasn’t breathing.

Anderson dialed 9-1-1 as Sylvain raced to get help. When Principal Peri Eldridge entered the classroom, she saw that Wild was turning blue, and her skin was cold to the touch. Soon, Eldridge was running down the hallways, desperately searching for someone certified in CPR.

The answer to her prayers was P.E. teacher Kristen Sullivan. While Sullivan had never had to put her extensive CPR training to the test in an emergency situation, she did not hesitate as she quickly assessed the situation, moved Wild to the floor and began administering CPR.

EMS arrived at the school minutes later to transport Wild to Kenner Regional, but Eldridge believes the timely response from staff was critical to saving her life.

Wild had 100% blockage in her left anterior descending artery, also known as the widowmaker artery. This type of blockage can cause people to collapse from sudden cardiac arrest. The American Heart Association states that only 12% of people who experience cardiac arrest outside of the hospital survive.

After emergency responders placed Wild in the ambulance, the ECW staff gathered in the library to pray.

“I noticed as I was running in the hallways, frantically trying to find somebody that could do CPR, that teachers had lined the hallways to try to help,” Eldridge said. “Every hallway I went down, teachers were trying to find numbers to call her family. As a principal, I was so thankful for my team and how they came together. I really feel like it was a miracle that happened that day. It was like we were all in the right place at the right time.”

Sullivan is thankful that everything worked out well and that she was able to administer CPR. Wild is not only a coworker to Sullivan, but also a trusted friend for more than nine years. However, Sullivan is confident she would have reacted the same way to help anyone in need.

“It was weird because I didn’t think; I just reacted,” Sullivan said. “When you train and take the CPR class several times, you just react. I’ve been blessed with the ability to stay calm, so I wasn’t panicking. I was worried but feeling positive at the same time.”

Sullivan was able to visit Wild last weekend. Even though she is still exhausted and sore from chest compressions, she is on a path to recovery.

Wild was present via Facebook Live during last week’s School Board meeting at Emily C. Watkins Elementary, where Sullivan was honored for her lifesaving response.

Eldridge looks forward to Wild returning to campus in the coming months and bringing smiles to her coworkers’ faces once again.

In the meantime, Eldridge is working to ensure more faculty and staff members are certified in CPR. In the past two weeks, 16 staff members at Emily C. Watkins have completed CPR training with the St. John the Baptist Parish Sheriff’s Office.

Local woman named to Gambit’s 40 Under 40