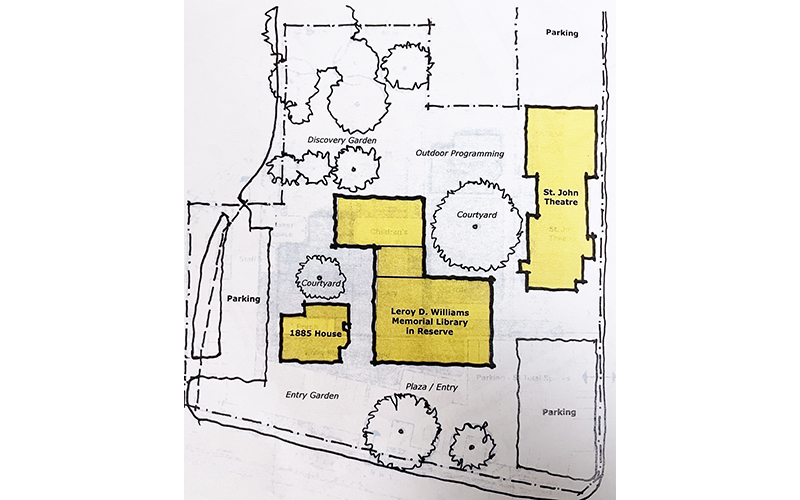 RESERVE — The St. John Parish Historic District Commission voted Thursday to approve the removal of two structures from the Reserve Historic District, paving the way for the construction of a new library adjacent to the St. John Theatre on River Road.

This week marked the third consecutive month that the Historic District Commission deliberated the decision to approve two certificates of appropriateness for the removal of the 1930s bungalow style houses at 1488 and 1490 Highway 44 in Reserve. The decision was tabled twice due to Commission members’ apprehension at not being able to control the fate of the structures after they are removed from the site.

“The term removal is greater than the term demolition, and it is every intent of ours to find people to repurpose these homes,” Tullos said, adding that she will work closely with the Parish through the next steps to find new owners for the historic properties.

Now that the Historic District Commission has approved the certificate of appropriateness, the following legally required steps must occur in order for the structures to be repurposed:

Tullos and Bryan Oubre, vice chair of the Historic District Commission, know of individuals who have expressed interest in purchasing and repurposing the historic homes.

The homes, identified as 48-04409 and 48-04410 on the Louisiana Historic Resource Inventory, were listed as contributing structures in the Reserve Historic District because they were built between the turn of the 20th Century and the start of World War II. This time period was marked by the success of the Godchaux Sugar Refinery, the founding of the Reserve Telephone Company and improved access to New Orleans.

Prior to Thursday’s vote, Oubre was encouraged by the possibility of the homes taking on new life with new owners. He pointed out that the Library plans to restore and utilize the third historic structure on the site, the 1885/Lebrun House, in the development of the new library.

“Before this project came around, we had three homes in that area, and two of them were basically vacant. No one was there,” Oubre said. “As far as preservation moving forward, even though the library is asking for (the houses at 1488 and 1490 Highway 44) to be moved, it looks like they will make them affordable and give people an opportunity to take those homes so they can be restored somewhere else.”

Oubre added, “We will definitely have one house (the 1885 House) that will be preserved, and there will be funding to keep it preserved in the future, which is a good thing. The architectural qualities of the new library are going to try to fit into some of those styles on River Road, and I see it tying in with the Theatre.”

The Historic District Commission voted four in favor, one against to award the certificates of appropriateness.

Commission member Steven Guidry was adamant in his opposition to the removal, especially since there is not a guarantee against demolition.

“I’ve been seeing history disappear for 40 years in Reserve, and I wasn’t going to let any more history be taken away. This is the last bit of history we have left,” Guidry said. “Only one person who voted in favor of this lives in Reserve. I asked for one person, anybody in the community to call me if they are in favor of tearing these houses down. I never got one call. Everybody is going against the people in Reserve.”

Library funding was set aside beginning in 2016 for the Reserve Building Project, estimated to cost $10 million. Tullos said no additional funding from taxpayers will be needed to complete the project.

According to Tullos, St. John Parish residents approved a millage of taxes to be used for library operations and maintenance. These funds were specifically directed to the library and cannot be used for other parish services, projects or activities.

Rather than simply serving as a repository for books, the new Reserve Library is intended to function as a cultural/community center tying in with the neighboring St. John Theatre. Public meetings were held in the spring and over the summer, and public comments have resulted in changes to the proposed Library design.