JENNINGS — A Jennings man used a stolen semi-automatic AR-15 rifle to shoot and kill an armed teen robbery suspect who had approached his home late Saturday.

The homeowner, Steven Paul Lazard, fatally shot 17-year-old Donavan Hollier of Crowley around 11:42 p.m. Saturday at a residence in the 300 block of Penny Street in Jennings.

Lazard, 31, is being held on a $5,000 bond for illegal possession of stolen firearms after police found the weapon used in the shooting had been reported stolen. 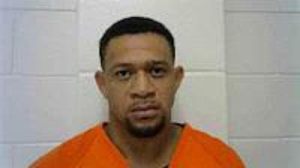 Steven Paul Lazard, 31, is being held on a $5,000 bond for illegal possession of stolen firearms after police found the weapon used in the shooting had been reported stolen.

No charges have been filed in connection with the teen’s death pending review by the Jeff Davis Parish District Attorney’s Office.

Deputy Chief Shelly Roberts said police were called to the area after a complainant said someone had shot at his residence.

When officers arrived, they found a deceased male subject laying on the ground at a residence located next door.

“The homeowner told police he had observed, on his home security system, someone running outside his property armed with a firearm,” Roberts said.

The homeowner is believed to have gone outside the residence armed with the rifle and exchanged gunfire with the suspect, she said.

“The information that we received was that the (shooting) victim and his uncle were together and had planned on these burglaries or robberies,” Roberts said. “They had left together and intended to commit these acts.”

It is unknown if the uncle was at the residence when his nephew was killed or was waiting in a vehicle down the street, she said.

The uncle, who was a person of interest in the case, died Sunday following a three-hour police standoff at an apartment complex in Crowley in which an Acadia Parish sheriff’s deputy was wounded in a shooting. Deputies were attempting to serve an outstanding warrant for the man who was also wanted for questioning by the Jennings Police Department.

The deputy is recovering at an area hospital.

Both incidents remain under investigation.

Gov. Edwards and the Dept. of Transportation and Development…