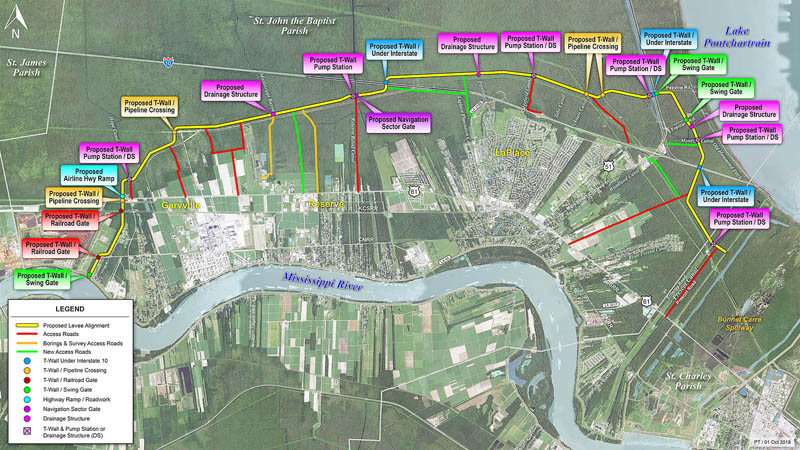 A basic mock up of the West Shore Lake Pontchartrain levee,

The $760 million project will span 18.5 miles, including 17.5 miles of levees, one mile of T-wall, drainage structures, pump stations, and several non-structural protection measures to form an integrated protection system. The structure will span from the Bonnet Carre Spillway to the Mississippi River Levee near Garyville and provide storm surge protection and improved resilience on the western shores of Lake Pontchartrain and Lake Maurepas.

“The River Parishes represent some of the most vibrant and vital areas in the state,” said Gov. John Bel Edwards. “With the completion of the West Shore project, thousands of Louisianans and millions of dollars of residential and commercial property will receive a much-deserved increase in their level of hurricane protection. Today’s event is a testament to the dedication of CPRA, the U.S. Army Corps of Engineers, the Pontchartrain Levee District, and all those who worked tirelessly to make this important project a reality.”

The West Shore Lake Pontchartrain project began as a study of the area between the Mississippi River and Lakes Pontchartrain and Maurepas in the aftermath of Hurricane Betsy. Lack of funding caused the proposed project to remain dormant until 2012, when Hurricane Isaac flooded 7,000 homes in the area and interstate 10, which delayed emergency response for days. Following pressure from state and local leaders, Congress authorized the project in 2016 and allocated funds in the Bipartisan Budget Act of 2018.

“This is what protecting South Louisiana looks like; this is what progress looks like,” said CPRA Chairman Chip Kline. “With this long-awaited effort, we are breaking ground on a project that will provide immense benefits to some of our state’s most susceptible regions. We’ve recognized the necessity of this project for some time, and we’re eager to provide our River Parishes with the protection they deserve.”

The West Shore Lake Pontchartrain Hurricane Protection project is a joint effort of CPRA and the New Orleans District of the U.S. Army Corps of Engineers, the Pontchartrain Levee District, and St. Charles, St. John the Baptist, and St. James parishes. Construction of the project is being funded through a 65 percent federal, 35 percent local cost share.

“The importance of this project is underscored by Congress’ decision to provide upfront funding through the Bipartisan Budget Act of 2018 and it shines a light on the importance of Louisiana to the nation,” said Col. Stephen Murphy. “You do not engage in flood risk management in South Louisiana if you are afraid of challenges and unforeseen obstacles. I know that we have the right ‘team of teams’ in place and when construction is complete, we will have accomplished an effort that will be a model for future flood risk management efforts in South Louisiana. That being a hybrid system that uses every tool in the box, combining nonstructural and structural features to deliver risk reduction across a large project area.”

Initial vegetation clearing and data collection are now complete and contracts to excavate and stockpile levee material from the Bonnet Carre Spillway have been awarded, with project completion anticipated for 2024.

“This project dates back to before I was born. We’re cutting through the bureaucracy and red tape, and the people in the River Parishes are finally going to get the flood protection they deserve,” said U.S. Rep. Garret Graves. “Dirt is turning and we will be protecting our families, homes, businesses, and communities. It will lower flood insurance rates, and lure economic development and jobs to the region. The West Shore Project will ultimately make St. John, St. Charles, and St. James parishes safer places to raise a family. This is exactly how we invest in our infrastructure before a storm rather than after the fact – spending much more on disaster recovery.”

“This project demonstrates the commitment to providing flood protection for our communities so that they can grow and prosper,” said U.S. Rep. Troy Carter.  “While there is still more to do, I’m gratified that this project is finally beginning so that St. John, St. James, and St. Charles finally have the safety they deserve.”

“Today’s groundbreaking marks a significant milestone for much-needed flood protection in St. John the Baptist Parish,” said St. John the Baptist Parish President Jaclyn Hotard. “Construction of the West Shore Lake Pontchartrain Levee project is a critical step forward in protecting thousands of residents and businesses from coastal flooding and ensuring a more resilient community for many generations to come.”

“I am proud to stand alongside my fellow river parish presidents to take another step toward establishing regional flood control management,” said St. James Parish President Pete Dufresne. “We still have work to do in St. James Parish to improve the current design of our levee protection system. However, I am confident that working together with the Army Corps of Engineers, Pontchartrain Levee District, and with our neighboring parishes, we can finalize an alternative alignment that better protects our residents in one of the most flood-prone areas in southeast Louisiana.”

“Today, we celebrate the efforts of people at the local, state and federal levels working together towards one common goal,” said St. Charles Parish President Matthew Jewell. “This project will provide peace of mind and stability for the residents and businesses in this area, and I’m excited to see this much needed flood protection coming to the River Region.”

“After a ‘Hail Mary’ move by Congressman Garett Graves, the Pontchartrain Levee District remains extremely grateful to him and all of our congressional and state delegation for the West Shore Hurricane Storm Damage Risk Reduction project,” said Gorman. “The continued collaboration and shared commitment to this project is evidenced daily and so much work is happening behind the scenes to accomplish this large scale hurricane risk reduction project.”