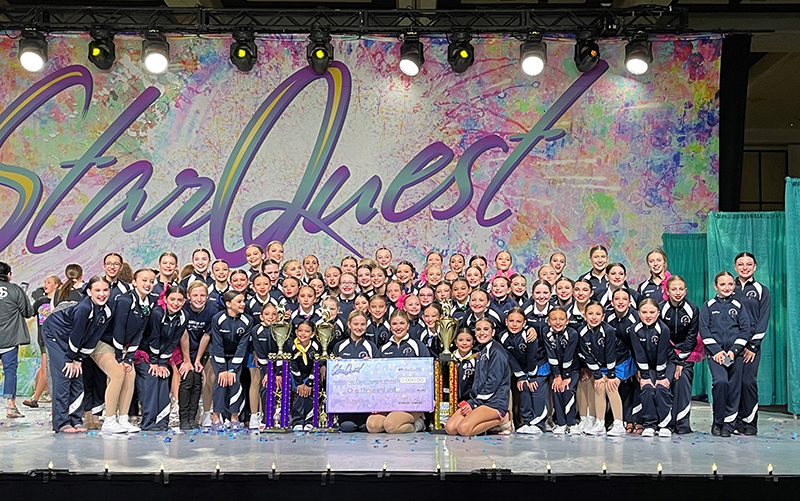 “After missing out on our entire competition season last year, it was so great to see our kids return to the stage this year doing what they love. This was a tough competition, and I am beyond proud of our dancers and teachers for rising to the challenge,” said studio owner and director Kelli Manville. “Our students work so hard throughout the year, and as a teacher it is amazing and humbling to watch them grow as performers and as people.”

After five days of competition, four of Kelli’s routines were invited to dance in the Final Dance-Offs for the last two days of the competition.

At the Classic Dance-Off, Scoutin’, a hip-hop dance choreographed by Karleen Bouza, was named Petite/Junior Mega Line dance-off champion and also won the Apogee Award for being the highest scoring petite or junior dance of the entire dance-off. Before the dance-off, Scoutin’ also took home first place for junior mega lines, a platinum adjudication, and a costume award during the regular competition.

Water from the Moon, a lyrical dance choreographed by Kelli Manville, placed third in Teen Large Groups in the Classic Dance-Off. They had originally placed ninth in the teen large groups.

Smash, a jazz dance choreographed by Karleen Bouza, was invited to compete in the Quest for the Best Dance-Off where they received second place overall in Teen Lines. During the week, they placed fifth in teen large groups with a platinum adjudication.

Many of their other routines placed and took home honors during the competition, including the following: