His coming-of-age story was written on the field, first as a breakout star of the 2007 football season for Hahnville High School. Byrd went on to play football for the University of Miami and signed with several NFL teams before an injury cut his dream short  and left him with the overwhelming uncertainty of what comes next.

Through his nonprofit organization, we MADE, Byrd is building a culture founded on more than athletics.

“We specialize in giving kids in our community and adults access to health, fitness, education and job training skills,” Byrd said. “We’re showing them that football or sports in general can be an avenue.”

More than 100 children recently attended a football camp that served as a pilot for the program. In addition to learning fundamentals of the game inside the Hahnville Tigers Stadium, children were given access to nutrition, education and inspiration.

Informative STEM booths lined the sides of the football field. Taste of New Orleans served breakfast and lunch to the participants, and representatives from South Central Humane Authority were on site to perform health screenings.

The St. Charles Parish School Board is assisting with the program by helping kids at risk of falling behind get access to extra tutoring. Byrd also partnered with A Safe Place of St. Charles to offer resources on mental health and suicide prevention.

“We are basically focusing on treating the whole kid, rather than just focusing on football or basketball. Let’s knock down the doors to resources and keep it going,” Byrd said. “The reason we support mental health so much is because I suffered with mental health from having concussions and getting hurt. I’m so thankful I had people like Danny Williamson encourage me to use my platform because it could help kids.”

The program is slated to officially launch after the Christmas holiday, going into 2022. Resources will be provided alongside additional football camps, basketball camps, baseball camps and more.

“It’s infectious right now, and we are working together to build a sustainable program,” Byrd said.

Williamson said it’s important to reach the youth at an early age to let them know their future isn’t limited to the football field or the basketball court.

“Myself and so many of my friends played ball. Then once that transition happens and it’s over, a lot of them fall into that period of not knowing what to do,” Williamson said. “We felt like we could start to talk to the kids and reach them now while they’re young and let them know that they have more options than just athletics. And if they do play athletics, after they finish playing, there’s a lot more they can do.”

Participants at last week’s football camp got a reprieve from the heat when they went inside to meet entrepreneurs from the local area. Williamson said not everyone is destined to become a doctor or a lawyer, so it’s critical to expose kids to a variety of career paths to help them find their niche.

“This is a great program because it is more than just athletics, but it’s also one big happy family.

Older players who used to play here come back to give back to the next generation. We keep going and keep building,” Williamson said.

Coach Luquet is happy that Hahnville is part of this important shift in high school athletics.

“Hahnville is only as good as the community in which we are. Today, we talked about being family. A big thing for me and LaRon that we’re trying to get kids to understand is that you may grow up in a certain area, but at the end of the day, everyone wants to be a Tiger,” Luquet said.

He added, “It’s going to help our program move forward because these kids are going to grow up seeing the purple and gold and know we’re going to offer something that’s more than just football. It’s going to make them a better person.” 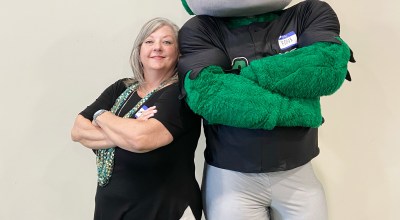