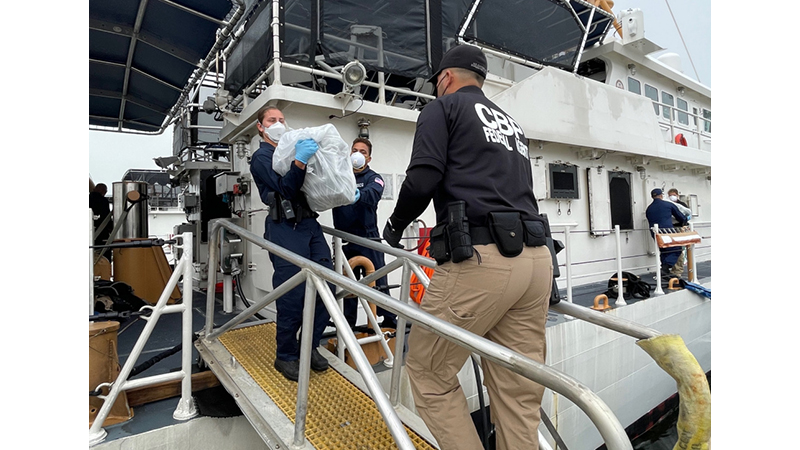 The interdiction resulted from multi-agency efforts in support of U.S. Southern Command’s enhanced counter-narcotics operations in the Western Hemisphere and coordination with the Caribbean Corridor Strike Force (CCSF). The United States Attorney’s Office for the District of Puerto Rico is leading the prosecution for this case.

Shortly thereafter, cutter Joseph Tezanos arrived on scene and interdicted the go-fast vessel with the assistance of the cutter’s small boat.

“I directly attribute the success of this interdiction to the close interoperability that the Coast Guard has with CBP and my crew’s phenomenal performance during the pursuit, boarding and towing of the go-fast vessel,” said Lt. Anthony Orr, Cutter Joseph Tezanos commanding officer. “It was a pleasure to work with the crew of the CBP aircraft, who vectored the cutter to intercept the go-fast vessel. Having a CBP Air and Marine Operations pilot onboard the cutter during the case proved very fruitful as the crew and pilot shared best practices, which can only help in future joint cases. As Joseph Tezanos completes her patrol, we return home with the pride that half a metric ton of cocaine will not make it to the streets. ”

The Caribbean Corridor Strike Force (CCSF) is a multi-agency Organized Crime Drug Enforcement Task Force group operating in the District of Puerto Rico focusing on Caribbean and South American-based Transnational Criminal Organizations involved in the maritime and air smuggling shipments of narcotics from Puerto Rico to the Continental U.S. and in the laundering of drug proceeds using bulk cash smuggling and sophisticated laundering activities. CCSF signatory agencies include the DEA, HSI, FBI, CGIS, USMS, and the U.S. Attorney’s Office.