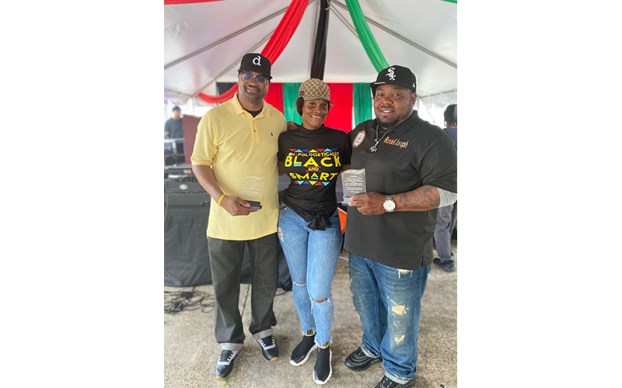 LAPLACE — Rain did not put a damper on the inaugural Top Notch Essentials Juneteenth Festival held June 27 in LaPlace. It was a vibrant event filled with prayer, poetic words, cultural performances, recognition of community commitment and a “stop the violence” candlelight vigil.

While Juneteenth has been celebrated for many years in parts of the country, the holiday representing the freedom of the formerly enslaved came into national focus with the advent of the Black Lives Matter Movement. Juneteenth was officially recognized as a holiday in St. John the Baptist Parish beginning in 2020. Kita Harry, owner of Top Notch Essentials in LaPlace, felt called to organize a Juneteenth Festival in celebration of culture, legacy and community. 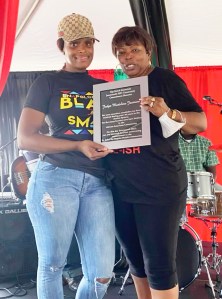 “Hopefully it allows us to come together and reminisce on our past, where we have come from and how far we have come. I hope we can appreciate that and do better as a race and as a human race as well,” Harry said.

Harry said proceeds from the Top Notch Essentials 2021 Juneteenth Festival will benefit Whitney Plantation in Wallace. This will support the nonprofit’s commitment to sharing the dark history of slavery on plantations. A portion of the proceeds from the 2021 event will also support the Top Notch Essentials Scholarship Foundation. The Juneteenth Festival will benefit a different group each year.

According to Harry, 19 vendors offered food, clothing and wellness products in the Becnel properties parking lot during the Festival. It also served as the grand opening of Harry’s food truck, Top Notch Creole Creations. 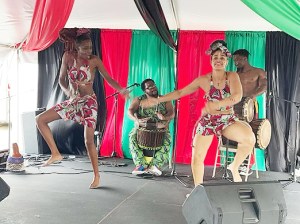 The program began with an opening prayer led by Denarold Anderson. Adina Oubre and sixth grader Jaz Thompson recited powerful poetic words, and 15-year-old Alexia Perkins sang “Lift Every Voice and Sing,” a song that was named the Black National Anthem by the NAACP in 1919.

Live music from R&B and gospel bands was among the highlights of the event. Local rapper Elijah AKA Vision of Christ Life Vision delivered a positive message through his music. The crowd also enjoyed performances by African dancers and drummers.

A member of State Representative Randal Gaines’ office attended the Festival to present a proclamation of the 2021 Juneteenth holiday. Sunday’s event also included the presentation of  the Top Notch Essentials 2021 Juneteenth Festival Community Commitment Award to recently retired Judge Madeline Jasmine. According to Harry, Jasmine was honored for her 30-year career as the first African American female in the 40th Judicial District Court.

As daylight turned into dusk, the community gathered for a candlelight vigil in hopes of stopping violence in St. John Parish and across the country. Pastor Devin Mason led a prayer, and Rondell Joseph of the St. James Parish NAACP served as guest speaker.

For more information about how to participate in future Top Notch Essentials Juneteenth Festivals, contact Harry at 504-352-0261.

Juneteenth events are continuing to be held in St. John Parish since the threat of tropical weather interrupted celebrations on the weekend of June 19.

Community activist Derron Cook announced that some local Juneteenth gatherings have been rescheduled for this weekend and adapted into a “Yonder Comes Day” Juneteenth Meets Fourth of July weekend in St. John Parish.

Some community members flaunted Juneteenth freedom gear July 1 as they enjoyed entertainment and fireworks provided by St. John Parish on the grounds of St. Peter Catholic Church in Reserve and St. John the Baptist Catholic Church in Edgard.
The Second annual Juneteenth Freedom March from the Home Depot Parking Lot to the St. John Parish Government Complex was scheduled for 8 a.m. Saturday, July 3, with the second annual “Light Up the Night for Black Lives” bike ride taking place at 6 p.m. Juneteenth photos can be shared using the hashtag #SJBPJuneteenth2021.