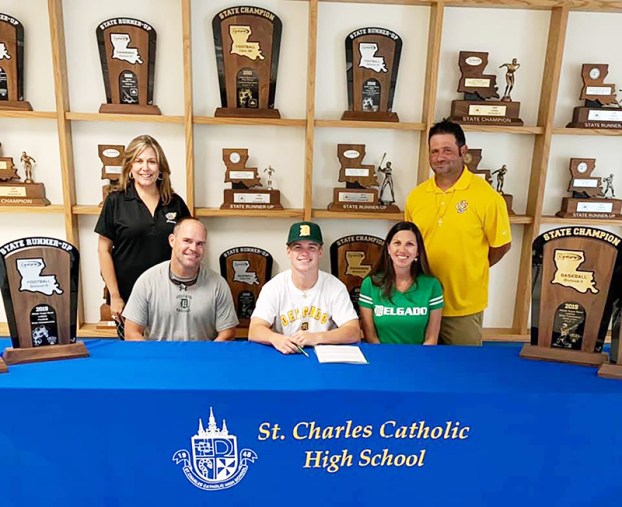 Prejeant played short stop and pitched for the Comets. During his senior year, Prejeant batted .437 and went 58 for 60 in stolen bases, in addition to receiving first team all-district, District MVP, all-regions and all-state accolades.

The baseball diamond is a place he’s called home since he was about 5 years old. He cultivated a love for the game while building bonds with teammates. By the end of his senior year, he realized he wasn’t ready to give up baseball.

“I have friends who played at Delgado. It’s a winning program, kind of like St. Charles, so I thought that would be the best fit for me,” he said.

Prejeant was surrounded by his parents, Drew and Lisa Prejeant, as he signed his letter of intent June 25. He will be a second-generation college athlete, following in the footsteps of his father, who played baseball for Louisiana Tech.

Baseball isn’t the only way he is building upon the example his family has set. Prejeant said he plans to study engineering, a career path inspired by his father and grandfather. His two younger brothers, Bryce and Dax, are currently dual sport athletes at St. Charles Catholic.

Prejeant is no stranger to hard work, and he learned a lot about teamwork and discipline through St. Charles Catholic athletics.

Prejeant was part of the 2019 championship team that earned the first state title in the history of SCC’s baseball program. He will never forget that sophomore year playoff run in during which he faced stellar competition against Teurlings Catholic, St. Thomas More and University High.

While his junior year was cut short by the COVID-19 pandemic, Prejeant was grateful to experience another playoff run to the semifinals during his senior year.

One of his most memorable games this year, apart from facing Lafayette Christian in the semifinals, was against Dunham in the first game of the quarterfinal series. It wasn’t the Comets’ best game by any stretch of imagination as errors abounded on the field, but it demonstrated how St. Charles Catholic could rally together and come back for the win.

Coach Wayne Stein described Prejeant as the “ultimate competitor” and a “clutch performer” who demanded mental toughness from all his teammates.

“You wanted him up in every big situation,” Stein said.

Prejeant was also a member of the Comets football team, where he competed against perennial powerhouse teams like De La Salle, Newman and East Ascension. Senior year ended on a high note as SCC advanced to the semifinal game against Notre Dame.

Prejeant played strong safety on the field and earned first team all-district during his junior and senior year.

ORANGE BEACH, Ala. — The Louisiana Power 9U baseball team dominated at the 2021 Gulf Coast World Series and returned... read more