Get ready for the unexpected with a disaster go bag 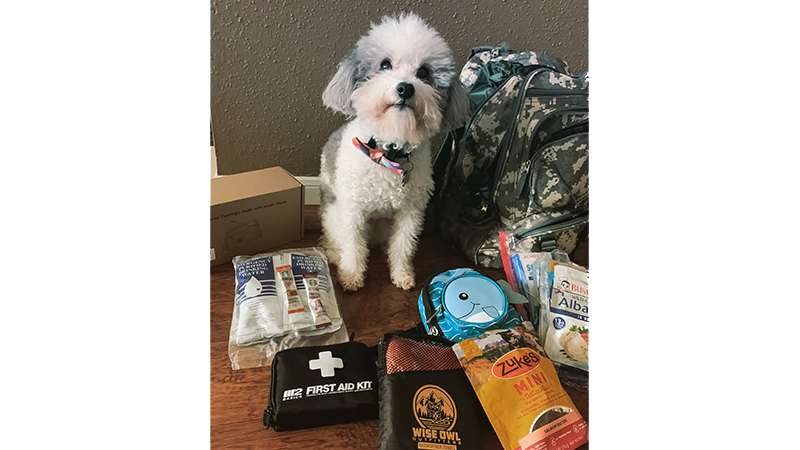 Jolted awake at 3 a.m. by a neighbor’s urgent knocking, Aaron and Jacqueline Pate were greeted by a horrifying sight — flames encroached on their neighborhood amid thick smoke and ash from the wildfire that had been miles away when they went to bed.

“We grabbed the go bags, the kids, the dog and got in our cars and left,” said Aaron, of the fast-moving Woolsey fire that burned to within 100 feet of their Westlake Village, California, home in 2018.

It was the deadliest and most destructive wildfire season the state has on record, but it’s been followed by record-setting hurricanes, winter storms, and other extreme and abnormal weather events in one place after another. Experts expect that such natural disasters will only become more frequent.

“Having a personal preparedness plan increases your chances of staying safe,” according to a training program from the Columbia University’s National Center for Disaster Preparedness. Having supplies ready to go, it says, is one of the steps that provides “resilience to all types of emergencies.”

The Federal Emergency Management Agency (FEMA) recommends collecting what everyone in the household needs to survive for several days along with important documents into an easy-to-carry kit, often called a go bag.

The Pate family saw the value of these preparations. “Because we had go bags, we weren’t running around trying to pack things at the last minute,” said Jacqueline. “We had the time we needed to comfort our kids and get everyone safely into the car.”

The Pates credited the disaster-preparedness help they received as Jehovah’s Witnesses, both through periodic reminders at their congregation meetings and from tips for putting together go bags on the organization’s website, www.jw.org.

Just three miles east of the Pate’s residence, their fellow congregants Joseph and Chelsea San Roman also fled the Woolsey fire with their go bags. Although their home burned to the ground, Chelsea said they didn’t even consider staying behind in hopes of fighting the flames. “There was no way we were going to risk our safety for material things,” she said. “We were ready to leave it all behind.”

Go bags also have proven useful in the opposite circumstances as “stay bags.”

When February’s Winter Storm Uri left millions of Texans without heat, electricity, and running water, many go bags there saw their first-ever use outside of hurricane season.

Northwest Houston residents Dan and Rhiannon Muey’s advance preparation enabled them to shelter in place for days, even as many in their area braved treacherous road conditions to scour barren store shelves for supplies.

“Our hurricane ‘go bags’ became our winter storm ‘stay bags,’ but we were so glad we had them,” said Dan. “Instead of waiting in lines for hours to get basics like drinking water, we already had what we needed.”

Lake Charles, Louisiana, residents Matthew and Daisy Gauthier regularly sit down with daughters Madison, 17, and Sadie, 15, to review and replenish the family’s emergency supplies. “We don’t look at it as a chore,” said Matthew. “It’s quality time we can spend together. We look over jw.org‘s list of suggested items, and if we’re missing something, we add it.”

The Gauthiers’ efforts paid off last August, relieving stress as they prepared to evacuate ahead of Hurricane Laura.

Being prepared meant the Gauthier family could leave the area before the evacuation order was issued. “Having our go bags allowed us to act faster,” said Matthew. “If we had to start from scratch and say, ‘OK, we need this, we need that,’ it would’ve slowed us down a lot.”

Two days later, Laura made landfall as a deadly Category 4 storm with the strongest hurricane winds recorded in Louisiana in over 150 years.

Another Lake Charles family, the Rinis, returned after the storm to find that their go bags had unexpected post-storm practicality.

The Rinis’ property sustained only minor damage. Still, with no power or water and days of cleanup ahead, the family made immediate use of their emergency supply kit. “We questioned including many of those items when we first packed them,” admitted mom Ashley. “But within the first 36 hours, we used over half of our go bags’ contents: cash for gas, a flashlight, duct tape, matches, bug spray, water, extra clothes, batteries, and so many other things.”

Today, these ‘ready bags’ occupy a place of honor in the Rini home: their own shelf by the door. To anyone who has not yet assembled a go bag, 10-year-old Arden solemnly said: “You might not think you need one, but trust me—you really do!”

Disaster-preparedness suggestions and tips for putting together a go bag are available from FEMA at ready.gov and from Jehovah’s Witnesses at https://www.jw.org/en/library/magazines/awake-no5-2017-october/disaster-steps-that-can-save-lives/.