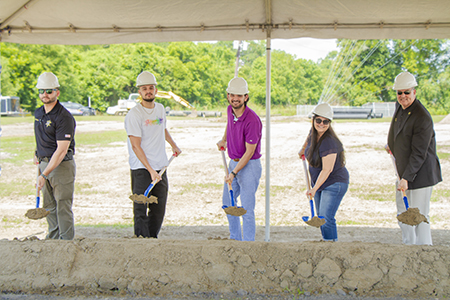 LAPLACE — The St. John the Baptist Parish Sheriff’s Office is continuing its quest to enhance intensive training programs with the construction of a new Special Weapons and Tactics Team training facility in LaPlace.

Expected to reach completion in the first quarter of 2022, the facility will be named after Captain Octavio “Ox” Gonzalez, a St. John Parish officer who was killed in the line of duty in 2006. According to Sheriff Mike Tregre, it will replace the 18-year-old training area that has been utilized by SWAT to practice active shooter, burglary tactics and hostage situation response.

Tregre said the SWAT facility is separate from the newly completed Lloyd B. Johnson Law Enforcement Training Center in LaPlace. While the Lloyd B. Johnson Center welcomes community involvement, SWAT training requires a higher degree of confidentiality.
The old facility was impacted by weatherization and a tornado that struck LaPlace. Lt. Jake Boudreaux, commander of the SWAT division, said the new building will be 6,000 square feet and completely modular, meaning the floor plan can easily be rearranged with movable walls and doors.

“It will have six exterior doors, 20-plus rooms, 36 interior doors, five hallways and 22 windows. We’ll be able to have multiple configurations for residential structures, mobile homes, commercial buildings, school hallways and businesses incorporated into the design. A lot of thought has gone into this. All interior and exterior doors will be able to be breached manually, explosively and ballistically and then easily replaced,” Boudreaux said.

Boudreaux added that configuring floor plans quickly and with minimal effort will allow officers and instructors to devote more time to training. A catwalk inside the facility will give students and instructors a bird’s eye view of the training area. A pavilion will be located outside for briefing and breaks between sessions, and a roof over the facility will provide protection from the elements.

“This will save lives of officers as well as help us better prepare for scenarios,” Boudreaux said. “The training facility will be an asset to departments throughout the state, and we will be able to train for active shooter, barricade, counter-terrorism, mass casualty and patrol response.”

Last Friday was an emotional day for the family of Captain Octavio “Ox” Gonzalez. His wife, Gloria Gonzalez, and sons Bryson and Alexander Gonzalez participated in a groundbreaking ceremony held in his honor outside of the Patrol Headquarters in LaPlace.

Gloria said she continues to pray for peace, and she knows Ox would be proud of the strides the St. John Sheriff’s Office is making.

Ox was ambushed, shot and killed on June 16, 2006 while participating in a manhunt for two suspects who had shot and wounded another officer minutes earlier. John Lee Cheek of Houston, Texas, shot Ox three times from behind after he was lured out of his vehicle by a woman pretending to need help.

He was 40 years old and had been a police officer for 17 years. Wayne L. Jones, the St. John the Baptist Parish Sheriff at the time, commended Ox for being the architect of the parish’s Special Operations Response Team. He was well known by SORT and SWAT officers throughout the New Orleans region.

“All officers who have died in the line of duty will not be forgotten as long as I am sheriff,” Sheriff Tregre said during the groundbreaking ceremony. “Today is a good beginning. Today is a day we remember Ox. He tried to do what the rest of us are still trying to do – protect citizens and protect our parish. We had a training center out here, and Ox was one of the people primarily responsible for it. He saw a need for the department to be better trained.”

Tregre said the groundbreaking is only the beginning, and a special ribbon cutting ceremony will be held with SWAT teams from around the state once the facility reaches completion.