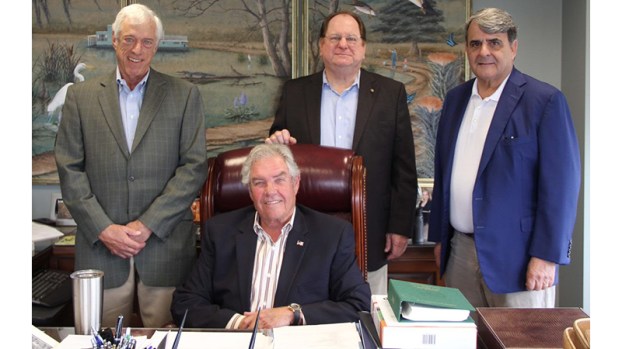 New Orleans, LA–Philanthropist and longtime children’s advocate Donald T. “Boysie” Bollinger of New Orleans has donated half a million dollars to Louisiana United Methodist Children and Family Services (LUMCFS) to offset construction costs of its new Southeast Louisiana Home and safeguard the home’s endowment. The new home will offer intensive care to Louisiana children requiring behavioral and emotional treatment that is unavailable in their local communities.
Bollinger, who is deeply dedicated to families and children with special needs, announced the $500,000 gift after studying the children’s organization over several years, and making on-site visits to the Methodist Children’s Home in Ruston and recently to the new children’s home under construction in Tangipahoa Parish, near Hammond.
“In many cases, my philanthropy goes to loving families who still need special help for their children,” Bollinger said in making the gift. He added, “This gift is hope…a future for the children.”
The philanthropist said he initially learned about the work of the organization from Randy and Rosemary Ewing, longtime supporters. He was encouraged by their enthusiasm and the dedication of the home’s board of directors in donating the initial $1,000,000 to build the new facility. Bollinger was joined recently by three long-time friends who thanked him personally for his
support. Billy James, Curtis Pellerin, and Bob Reich all began their support of the prior home when it was located on Washington Avenue in New Orleans. He was encouraged by their enthusiasm. Besides his personal visits, he met some of the children and staff specialists and talked with others who were actively involved.
In defining the gift, Bollinger said, “The children’s group is creating opportunities to fulfill a need and they are doing it in a special way.” He added that “…children going here will make much better citizens of this state and country as a result of having gotten the care.” LUMCFS will name the new home’s large congregate area, the “Boysie and Joy Bollinger Dining Hall Complex” in the donors’ honor.
“I give because I love to,” added Bollinger, who was raised in a family of philanthropy. “If you have an interest in helping children that have a real need, this is a good place to look,” said Bollinger in discussing the benefits of supporting LUMCFS. He has provided funds to various children and family service organizations in Louisiana.
Bollinger is helping with construction costs to safeguard the LUMCFS endowment which allows the agency to offer enhanced services, said Patrick Blanchard, LUMCFS Development and Public Relations Director. The 119-year-old organization is dedicated to helping children who are abused and neglected and in need of intensive therapies. In addition to the new home being constructed, it also operates two other intensive residential facilities and statewide therapeutic foster care through 130 families.
The new Methodist Children’s Home of South Louisiana and New Orleans is nearing completion and expected to open in late August. The nonprofit organization is building the facility totally with private funds. Over $6.75 million has been raised for the land purchase, site development, residential facility, classrooms, cafeteria, and clinic. “We are working diligently to raise the additional $3.25 million in the last stretch of the campaign,” added Blanchard.
The original Methodist Children’s Home of New Orleans was located uptown but was closed after Katrina. The LUMCFS children have been cared for in a leased facility in Mandeville pending the completion of the new permanent facility in Loranger.
To make a gift or to learn more, go to LUMCFS.org.
You Might Like