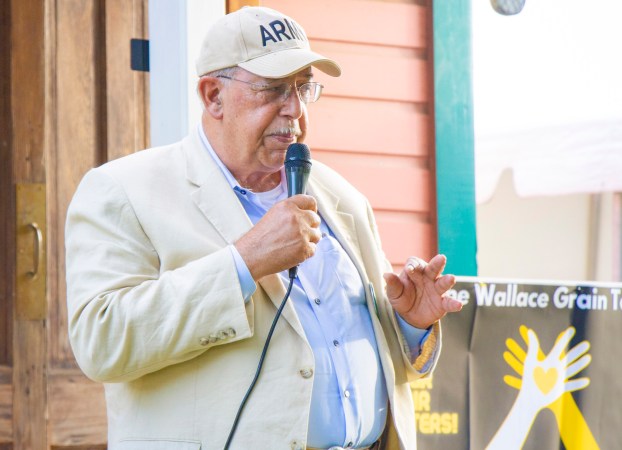 WALLACE — Retired Lt. General Russel L. Honoré believes the first rule of patriotism is to vote in a democracy. He said the second most important responsibility citizens have is to take care of the communities they live in.

Honoré, best known for coordinating military relief efforts in the aftermath of Hurricane Katrina, visited the West Bank of St. John the Baptist Parish Monday evening and served as the keynote speaker for a “Stop the Wallace Grain Terminal” town hall meeting.

The gathering was held outside of Fee-Fo-Lay Café to voice concerns about Greenfield Louisiana’s proposed 248-acre terminal in Wallace. The structure is expected to include 36 grain silos with structures as tall as 300 feet, roughly the size of a 20-story building. A grant application stated that the Greenfield Project is expected to create 300-plus jobs during peak construction and approximately 60 jobs with an average salary of $100,000 plus benefits once operational.
Members of the Wallace community are concerned about the environmental and health impacts of grain dust. Dr. Kim Terrell of the Tulane Environmental Law Clinic said this type of particulate matter is associated with conditions including asthma, COPD, lung cancer and bronchitis. She added that dirt, insect bits and bird and rat feces that may accumulate with the grain during harvesting, processing or storage can irritate the respiratory system when inhaled.

Another concern cited during the community meeting was the risk of explosions after organizers pointed out that the Occupational Safety and Health Administration determined grain handling is a “high-hazard industry.”

Lt. General Honoré spoke about stopping the expansion of industry along the Mississippi River while holding existing industry accountable for finding solutions to pollution.

Honoré holds a bachelor’s of science in vocational agriculture from Southern A&M College, a master of arts and human resources from Troy State University and six honorary doctorates from institutions across the country. He served in the United States Army for 37 years and received a host of awards, including the Kuwait Liberation Medal and the Humanitarian Service Medal. Since his retirement in February 2008, he has continued to speak and consult nationally on building a culture of preparedness, and he was recently called upon to review capital security procedures following the January 6 insurrection of the United States Capitol.

Honoré has mobilized the Green Army, a community of environmental groups and concerned citizens with a mission to effect meaningful social, political and environmental change in Louisiana.

Honoré told the participants of the town hall meeting that the silence from elected officials on environmental matters is “deafening,” and it is time the people make their voices heard.
“Under the laws of the Constitution, it’s the community of people in the parish you live, in the town you live, in the bump in the road that you live, that make a difference in what government does. Unless you speak up, the government doesn’t listen,” he said.

Honoré encouraged residents to attend Parish Council meetings and to utilize technology to the fullest extent to make their voices heard. One example involved creating a list of governing agencies and elected officials to tag in every post, photo and video concerning the grain elevator.
According to Honoré, another aspect of patriotic duty is knowing the law in order to enforce the law.

During the meeting, participants circulated a petition to get the St. John Parish Council to hold a special meeting about the Greenfield Project. This effort, according to organizers Jo and Joy Banner, followed unsuccessful attempts to get the issue onto Parish Council agendas.

Jo Banner described the situation as “the same old story” – one where industry decides to locate in a small, predominantly Black community; a story that involves politicians and decisionmakers signing off on massive projects without feedback from the residents.
According to Jo Banner, these stories often involve the promise of lucrative jobs that end up going to individuals who don’t reside in the area.

“(Industry) will give us a scholarship and maybe a high school scoreboard. For Thanksgiving, they may give us a turkey with a can of cranberry sauce. All you have to give them is your livelihood, your quality of life, your life,” Banner said. “It seems like a fair trade to me. Seems like progress, doesn’t it? Of course it’s not progress, but that’s what they’re telling us about Greenfield exports, the company attempting to locate this project.”

Banner said the Wallace community is changing the narrative of the story by forming an inter-connected system of powerful advocate organizations.

Tulane Environmental Law, The Concerned Citizens of St. John, RISE St. James, NAACP of St. John Parish, Center for Constitutional Rights, Green Army, Together Louisiana, Inclusive Louisiana and the Louisiana Trust for Historic Preservation were among the organizations represented at the town hall Monday night. According to Banner, these groups stand as a united front to improve the health of communities along the Mississippi River corridor.

Joy Banner added that the Greenfield Louisiana site in Wallace is located in close proximity to former and existing plantation sites. According to Joy Banner, it is highly probable that the land contains unmarked burial sites of enslaved ancestors, in addition to Civil War artifacts.

Greenfield Louisiana had not responded to requests for comment as of press time.

Requirements include enclosure and aspiration to dust control for each barge and ship unloading leg, increased monitoring, annual opacity testing, increased frequency for stack testing, and opacity and emission standards applying during periods of startup, shutdown and malfunctions.