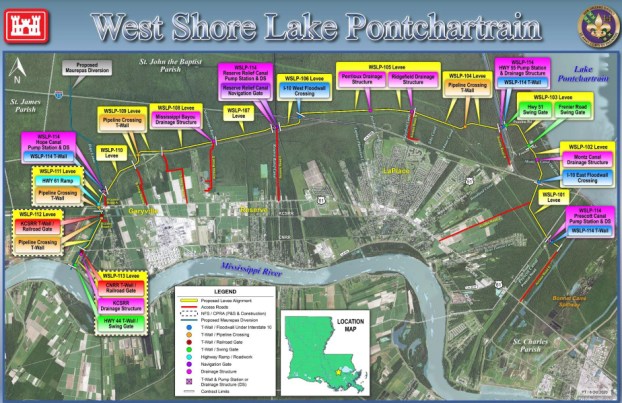 LAPLACE — In her “West Shore Wednesday” update for the month of May, St. John Parish President Jaclyn Hotard shared that recent inclement weather and coastal flooding has presented some delays to the West Shore Lake Pontchartrain Levee Project.

However, while the stockpiling of clay material was halted in the Bonnet Carré

Spillway, the West Shore Levee Project has continued moving forward. According to Hotard, the St. John Parish Council authorized agreements with Pontchartrain Levee District and the Coastal Protection and Restoration Authority to gain right-of-way provisions for the construction of access roads.

Access roads are a crucial step leading to the construction of the West Shore Levee, a $760 million federally-funded project that will provide storm surge protection to more than 60,000 residents in the River Parishes.

St. John the Baptist Parish will be responsible for the maintenance of the levee’s pumping stations after construction is complete. Each month, Parish President Hotard attends a stakeholder meeting with the Corps of Engineers to receive updates on how the project is progressing. These updates are also shared on the St. John Parish website.

Over the past month, the U.S. Army Corps of Engineers staff, contractors and representatives from the State have worked together to further optimize West Shore Levee designs. This included but was not limited to looking for opportunities to further optimize pumping stations and investigating whether pre-loading the levee alignment with sand and extending the schedule would reduce borrow requirements.

Current estimates project 7 million to 9 million cubic yards of material will be needed for levee construction. According to the Army Corps of Engineers, 3.5 million cubic yards of material is readily available at the Bonnet Carré Spillway. Crews have started collecting material at the Spillway to prepare it for transfer to a stockpile location between River Forest and the Shady Nook Trailer Park. Hotard said residents may have noticed the construction of an access road off of Airline Highway in this area.

According to the stakeholder update, the U.S. Army Corps of Engineers is looking to award a contract for remaining access roads in early July.

In addition to the materials from the Spillway, the West Shore Levee Project has been approved to utilize commercially available borrow sources. Five pits have been pre-qualified for inclusion on the list, and no additional pits are expected to qualify in the near future.

The U.S. Army Corps of Engineers has projected the levee will reach completion in Spring 2024. However, Hotard expects to see some shifts in the timeline with future updates.
“My guess is that it will change a little bit, possibly later into 2024 because with weather delays, we know we can have a time delay,” she said.

During the West Shore Wednesday update, Hotard also discussed the Parish’s plans to enhance drainage with the dredging of the Vicknair, Woodland and Haydel canals. According to Hotard, these three canals were selected first due to availability of funds through voter-approved bond issues. The costs of dredging the three canals are as follows: Vicknair ($661,265), Woodland ($742,555) and Haydel ($311,443).

“The Parish Engineer prioritizes based on factors such as condition of canals and the number of residents that drain to a particular canal,” Hotard said. “This is a very significant step in the right direction, and we are working continuously to identify funding for the remaining canals. Additionally, some of the canals that are only permitted for clearing and snagging can be done in-house and will be soon be scheduled.”

According to the Parish Engineer, St. John Parish has two joint Coastal Use Permits from the Louisiana Department of Natural Resources and the U.S. Army Corp of Engineers. The first permit covers six of the canals for excavation and clearing (Vicknair, Woodland, Haydel, Godchaux, Moll and Reserve Relief), while the second permit covers the clearing and snagging of an additional 36 canals. The determination of whether canals can be dredged or only cleared/snagged is made by the Department of Natural Resources.

Clearing and snagging involves removal of debris, vegetation, downed trees and any vegetative growth from the bottom of the canals that would be causing blockage, while dredging includes removal of sediment and reshaping canal bottoms.

DARE wraps up at Local Schools