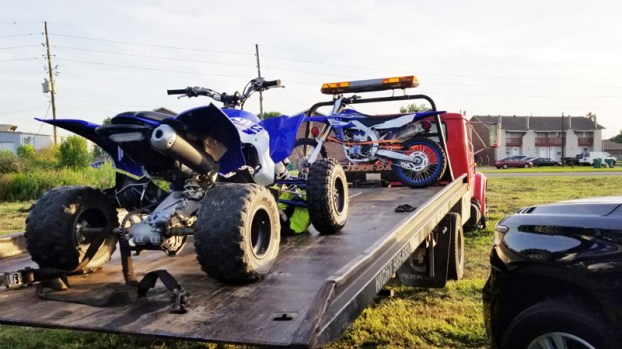 The St. John Sheriff’s Office has been receiving several calls from citizens complaining about people recklessly driving four-wheelers and dirt bikes in neighborhoods on the east and west banks of St. John Parish. This video is an example of what officers sometimes encounter – reckless drivers traveling at a high rate of speed on roadways, endangering themselves and others.
“These reckless acts pose a danger to these drivers and others in our community,” Sheriff Mike Tregre said. “We are going to enforce the law. We want to keep our citizens safe.”
Contributing to this problem, Sheriff Tregre said, is that ATV drivers sometimes gather quickly and travel more erratically when they know police are nearby. Often, they evade law enforcement, which poses a risk to the riders as well as other motorists.
Sheriff Mike Tregre reminds residents that operating all-terrain vehicles, dirt bikes and other off-road vehicles on public roadways is illegal. Residents caught operating any of these vehicles on public roadways may be issued a citation. The vehicle also may be towed and impounded at the owner’s expense.
You Might Like

The St. John Parish Sheriff’s Office is participating in the Click It or Ticket campaign May 24 through June 6.... read more