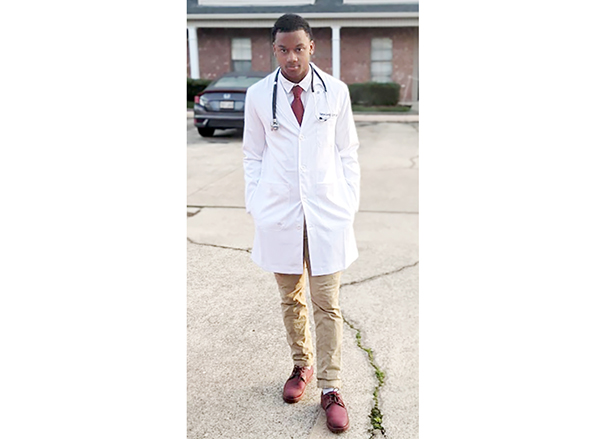 RESERVE — Tairyn Lockhart strives to be the best of the best. He’s graduating from Riverside Academy with 24 college credits and a 4.24 GPA after spending his senior year playing two sports, powering through injuries and helping his mother take care of their household.

The next stop on Lockhart’s journey is Penn State, where he plans to earn a bachelor’s degree in kinesiology. However, his ultimate goal is to transfer to Harvard University to pursue his doctorate of physical therapy.

Lockhart feels that his calling in life is to help others. Becoming a physical therapist will allow him to fulfill that purpose while also staying involved in the realm of sports he’s grown to love while playing football and basketball for Riverside Academy.

“I’ve worked really hard for this. To the younger people, I would say strive for the best and don’t let any people tell you what you can’t do. It’s possible. All you have to do is put the work in,” Lockhart said.

He also encourages young people, especially high school athletes, to give themselves options.

“Don’t just think, I want to play sports, so that’s all I’m going to do. Focus on your classes. Do your homework. Be the best in the class first and let the other things fall into place,” Lockhart said. “For me, the most important thing was academics. I came into the school year with some good interest for football from a few schools like Millsaps and other DII schools like Ouachita Baptist, but I got hurt, and I couldn’t play to the best of my ability this season because I was in and out of games. I was able to fall back on academics, and that still took me really far.”

When it came time to apply for colleges, Lockhart researched the best schools in the nation for kinesiology. While he had acceptance letters from Southeastern, Holy Cross, LSU and the University of Southern Mississippi, Lockhart had his sights set on a larger dream.

“My mom didn’t even want me to go to school in Louisiana because she wants me to strive for the best. When I think of the best, Ivy League schools is what comes to mind. I wanted to go to Harvard because I want to be the best of the best,” Lockhart said. “I’m not going to lie; the process was stressful. There were nights when I felt good about it and I was happy, and there were those nights when you kind of second guess it a little bit and you get down on yourself because it doesn’t seem so promising.”

Challenges associated with the COVID-19 pandemic meant Harvard was only able to accept 3.43% of applicants for Fall 2021. Lockhart put in the work by writing extra essays, doing volunteer work and communicating with counselors from Harvard, but it wasn’t quite enough for him to make the cut.

However, he isn’t giving up hope.

Lockhart’s experiences at Riverside Academy are a testament to his character and ability to succeed. He recently received Riverside’s first Jared Butler Basketball Award for academics, attitude and sacrifice.

Lockhart said the award was a great honor because Jared Butler signifies what it means to be a selfless player with a positive attitude.

“Jared was someone I looked up to being three years younger. He went off to play college basketball and became the face of college basketball. The year he wins the national championship, they give me the Jared Butler Award. It was an honor for me to get it because I feel like I’m living up to what he did,” he said.

Lockhart learned how to overcome adversity after an elbow to the face led to a concussion and a broken nose in the second game of his senior basketball season. His favorite memory from the season was the day he was cleared to return to the team.

Meanwhile, the most memorable moment from his high school football career came during his sophomore year. His first ever touchdown on varsity tied the score with a minute and 30 seconds left in a game against Rummel, one of the most talented teams in the state.

Lockhart has received all-academic and second team all-district accolades for football. His experience on the field covered everything from wide receiver to defensive end, linebacker, cornerback and safety.