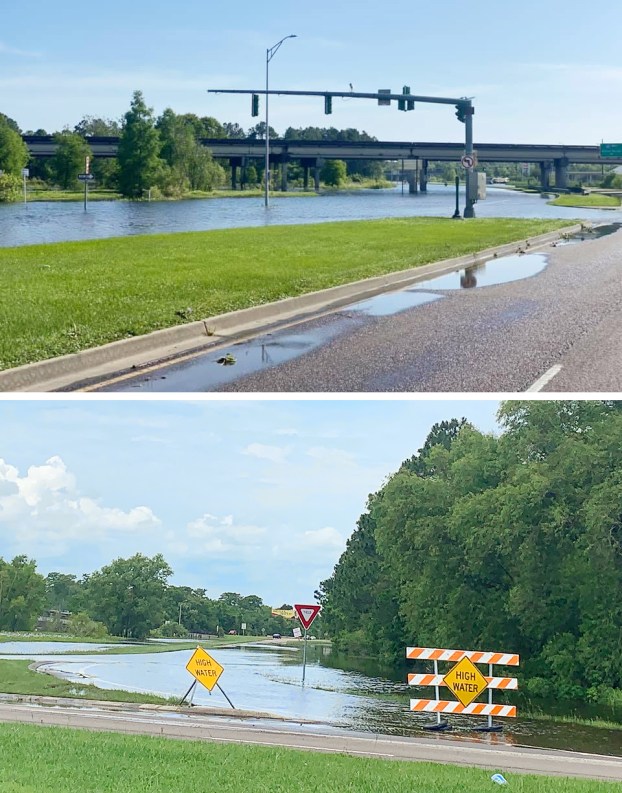 LAPLACE — Higher than normal tides, heavy rainfall, saturation and prolonged southeasterly winds contributed to coastal flooding in St. John the Baptist Parish from May 20-24, highlighting the need for a levee protection system.

Low-lying areas in Cambridge, River Forest, Old & New Highway 51 and LaPlace Park were most impacted as water blew in from the lake, while some areas of Reserve also had water acculumation in streets. On the West Bank, Pleasure Bend saw flooding from water being blown out of Lac des Allemands.

Parish President Jaclyn Hotard strapped on her rain boots and traveled through flooded streets on a side-by-side ATV to assess the situation. Public works crews were out in low-lying areas to make sure debris was removed from storm drains, and barricades were put up to keep motorists from driving through flooded areas. It was an all hands on deck situation, but Hotard said coastal flooding isn’t easy to mitigate. Water pumped to the lake ended up back in low-lying neighborhoods as long as the wind persisted.

“This has been the wettest spring in the past 74 years. We’ve had almost 40 inches of rainfall from March to May,” Hotard said. “That much rainfall, high tides and the winds created the perfect storm. It’s hard to mitigate damage from coastal flooding. Our best protection is a levee, which we don’t have (yet). You really are at Mother Nature’s mercy in an event like this.”

While street flooding was widespread, St. John Parish didn’t receive any reports of house flooding on the East or West Bank.

“However, when I was in Pleasure Bend on Saturday, there were a few houses that we saw that you could tell probably had about an inch of water for a short period of time,” Hotard said.

Residents should stay weather aware this Hurricane Season, as the NOAA’s Climate Prediction Center is projecting another above-average Atlantic Hurricane Season. Experts predict there will be 13 to 20 named storms, including six to 10 hurricanes and three to five major hurricanes between June 1 and November 30.

The West Shore Lake Pontchartrain Levee Project is currently in development to bring coastal flood protection to residents in St. John the Baptist Parish, as well as parts of St. Charles and St. James parishes. According to the U.S. Army Corps of Engineers New Orleans District, the levee alignment is approximately 23 miles in length, which includes 22 miles of levee and one mile of T-wall. The project also includes four pumping stations.

“The only role that the Parish has will be maintenance of this levee once the construction is complete,” Hotard said. “We will maintain the pumping stations through contracts with companies that specialize in maintaining high-capacity pump stations.”

The U.S. Army Corps of Engineers is releasing updates on the West Shore Levee Project at its monthly stakeholder meeting being held today, May 26. Hotard will inform St. John constituents of the updates during a “West Shore Wednesday” video update on the St. John the Baptist Parish Facebook Page this evening. Updates from the Corps of Engineers will additionally be posted on the Parish website at sjbparish.com.

As of the time of this report, the Corps of Engineers has not announced changes to the overall project timeline, expected to reach completion by Spring 2024. However, stockpiling of clay from the Bonnet Carre Spillway is behind schedule due to high amounts of rainfall over the past few months.

However, Hotard said the paperwork side of the project is progressing well. The Parish has entered into agreements with the Pontchartrain Levee District and the Coastal Protection and Restoration Authority to allow for access on all the right-of-ways to build these access roads. Some of the access road construction has begun, and some of it is completed.

“It’s moving along. It just takes time because it’s a federal project,” Hotard said. “I see the amount of work that they are putting into trying to meet all the deadlines and the timelines. There is a lot of work going into this project. The dirt on the ground is usually closer to the end of the project once all the right-of-ways have been secured and access roads have been built.”

Visit sjbparish.com for more information on preparing for the 2021 Hurricane Season or to sign up for text alerts. Please remember to only share updates on weather, flooding and road closures from reputable sources.