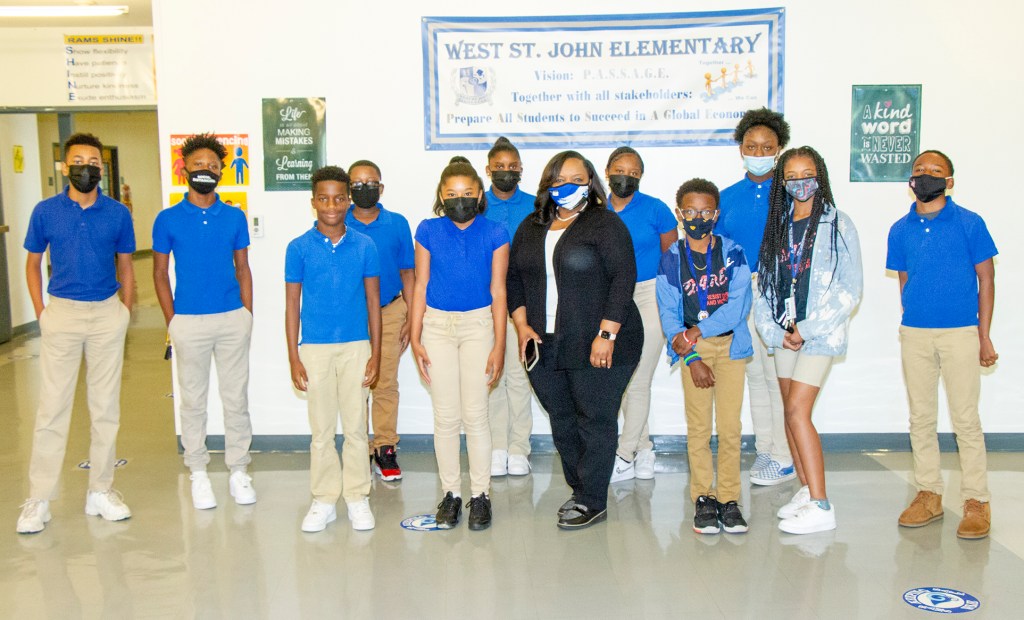 EDGARD — When Principal Chantell H. Walker arrived at West St. John Elementary School seven years ago, she found the school was in need of a culture shift.

It took a team effort to raise the school performance score by 17 points that first year. Walker said West St. John Elementary has maintained an ‘A’ in progress, meaning students are continuing to meet growth targets outlined by the state.

“We wanted to make changes at the school that had an impact on community support, parental support, employee support and overall support to scholars who were at West St. John Elementary,” Walker said. “What caused the growth was changing the culture at the school and getting the scholars more involved. When you educate a child, I believe in educating the whole child. It’s not only academics; it’s social, emotional, getting them involved in extracurricular activities to let them know that education is fun and to expose them to all types of opportunities.”

Walker is pleased a proud graduate of East St. John and a product of the St. John the Baptist Parish Public School System. However, she didn’t always plan on pursuing education. After graduating high school, she attending Nicholls State University and chose to study accounting.

“At some point after graduating, I decided to start substitute teaching. I liked it, so I decided to return to school to become certified to become a social studies teacher,” Walker said.

Social studies wasn’t an area that needed teachers at the time, so Walker became a math teacher instead. Her first job was a part-time teaching position in St. James Parish. After two and a half years of working in St. James Parish, she moved out of the country with her husband and became a teacher for the American Academy for Girls of Kuwait.

After a year of teaching in Kuwait, Walker returned to St. James High School. She spent a total of 10 years in St. James Parish schools, including eight years at St. James High. She then transferred to St. John Parish Schools, where she’s remained ever since.
“I wanted to return home to give back because this is where my heart was,” she said.

This is year seven at West St. John Elementary, but Walker will never forget her first year at the school. Her son was attended school as a seventh grader at the time, so she got to see the school from the standpoint as a parent and as a new administrator.

Earning parents’ trust was a major part of West St. John Elementary’s growth, and Walker pleased with the support she’s seen from local families. Another priority was making sure faculty and staff worked together to help students succeed.

“The culture shift started with the people who work here because if they’re not going to believe in your vision, then you are sure to fail. Between my Assistant Principal Melissa Green, the secretaries and all the faculty, it was all hands on deck. Everyone worked together because they wanted to see West St. John Elementary grow,” Walker said. “We have to put the students first because without the students, there is no school.”

Navigating the COVID-19 pandemic was a challenge because it forced the team to find new ways to reach students. Walker said West St. John Elementary rose to the challenge, but it was still disheartening to see students struggling on virtual learning platforms. It was also discouraging to have to cancel events such as Donuts with Dad that would normally bring parent interaction into the school.

“It felt as if I had to close doors, and that is not us. We are not a closed door school. We are open to our community. We had to learn a different way to communicate with everyone,” Walker said.

Thankfully, as the world returns to normal, West St. John Elementary is able to open doors for a ring ceremony and seventh grade graduation.

Walker said the seventh graders take a lot of pride in their positions as the “seniors” of the school. After a year that has proved to be different, they are passing the torch to the incoming class to continue building upon the culture of success.