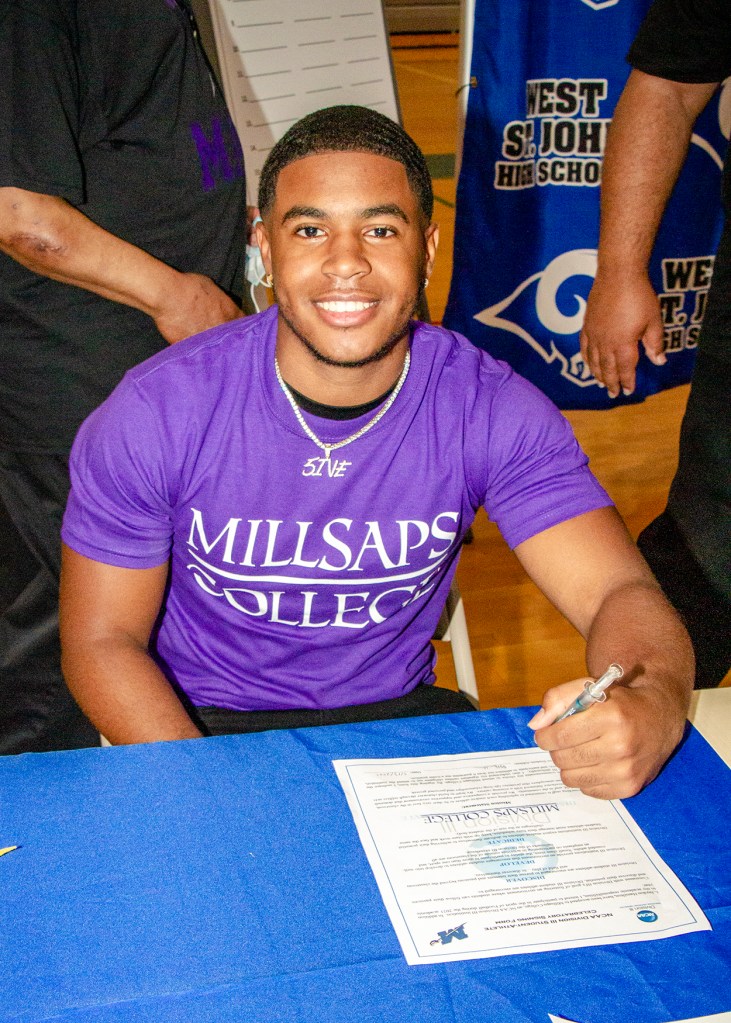 EDGARD — Jaydon Hamilton spent his entire childhood playing baseball, but something just clicked for him with football once he started high school at West St. John.

“I just grew a love for the game, but I wasn’t ready to let go of my love for baseball either, so I decided to do both,” he said.

Hamilton will continue competing in baseball and football at the collegiate level on an academic scholarship to Millsaps College in Jackson, Mississippi. He solidified his college choice during an athletic signing ceremony as part of West St. John’s Class of 2021 Decision Day last week in the Rams gymnasium.

Hamilton said the family-oriented atmosphere at Millsaps reminds him of home.

“Coming from a family-oriented school here at West St. John, every team I was on was always a brotherhood, and I feel that same vibe from Millsaps,” Hamilton said. “It pulled me toward this school and these teams. I feel like I can come in, do my thing and be a part of the brotherhood.”

That brotherhood started during Hamilton’s freshman year on the Rams 2017 championship football team. Even though he didn’t have much playing time during his freshman season, the upperclassmen took him under their wing and made him feel like an important part of the team.

Hamilton went on to earn first team all-district and all-academic accolades in high school. At Millsaps, he looks forward to playing safety for football and outfield for baseball. His ultimate goal is to win a conference championship in both sports, ideally during his first year on each team.

Coach Brandon Walters said Hamilton is self-motivated and capable of achieving anything he sets his mind to.

“He’s one of those kids that didn’t have the measurables that certain big schools look for, but he has immeasurables in heart and work ethic,” Walters said. “His academics are through the roof. He’s what colleges want in their program. We know he’s going to be extremely successful at whatever he does.”

Hamilton maintained a 3.6769 GPA and was named West St. John’s 12th grade Student of the Year. He was recently honored at a St. John Parish School Board meeting for earning a platinum score on the ACT-WorkKeys.