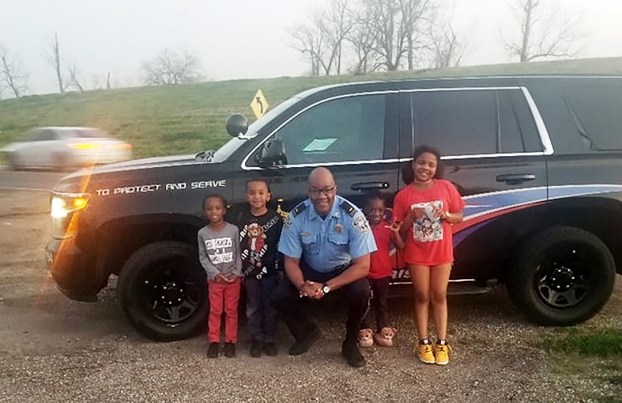 LAPLACE — Lt. Basil Trepagnier and Lt. Greg Baker see the value of community policing, especially when it comes to building positive relationships with the youth in St. John the Baptist Parish.

They go above and beyond to connect with the children they encounter while on duty in local neighborhoods, whether it means taking time to play a game of throw and catch or letting kids see the inside of their units. Both men also volunteer as basketball coaches with the St. John Parish Recreation Department to give back to the youth and show them a different side of law enforcement. 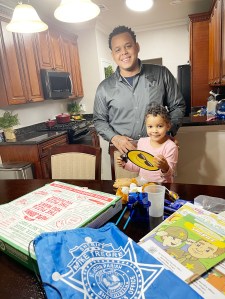 Trepagnier has been with the St. John Sheriff’s Office for nine years. He put his criminal justice degree to good use while working in corrections and patrol, eventually moving up to become a lieutenant in the Detective Bureau. He’s assigned to investigate major crimes including homicides, shootings and armed robberies, but seeing the worst sides of humanity hasn’t hardened his heart.

“At the Police Academy, they used to call me ‘Big Baby.’ I may be big physically, but on the inside I do have a soft heart, and I really do care for the parish of St. John, where I grew up,” Trepagnier said. “I know the importance of the relationship between the community and the sheriff’s office. Around the world, you see so many cities lose that connection with the sheriff’s office, but it’s important to me for us to be on one accord. At the end of the day, you’re putting your life on the line for their safety.”

Trepagnier especially loves interacting with children and painting a positive picture of law enforcement. Such was the case last fall when Trepagnier met a little girl named Rowan Williams after a traffic stop in a LaPlace neighborhood. Rowan flagged down Trepagnier and invited him to play baseball with her in the yard, to which he happily obliged.

In February 2021, Trepagnier, along with Sgt. Danielle Falgoust, planned to visit Rowan and enjoy another game of ball. Inclement weather cancelled those plans, so Trepagnier and Falgoust asked the little girl’s parents what her favorite food was and surprised her at the front door with a pepperoni pizza and SJSO goodies in hand. Trepagnier was delighted to hear the excitement in Rowan’s voice when she announced that she considers the police her friends.

Trepagnier also makes an effort to be there for victims of the crimes he investigates, as well as their families. This has included attending funerals and donating toys to children who have lost a family member.

“When we go out on calls and there are children involved at the residence, you try to make that experience as positive as possible,” Trepagnier said. “People, especially when they’re young, think of police officers and think of jail. It’s not always about jail. We try to show them we’re also peace officers. You have to take that time out to give them a different view of cops in our area.”

Lt. Greg Baker also strives to have a positive impact in the community he serves. Earlier this year, Baker was patrolling neighborhoods in Reserve when he was flagged down by a group of children playing outside. He stepped outside and learned that the children – Siya, Ashton, Promise and Antoine – were excited about viewing his unit. After letting the children examine the blue lights and sirens, Baker told them that a police officer’s most important job is being a community helper who protects and serves.

Baker was born and raised in St. Rose. After graduating from Destrehan High School, he was fortunate enough to attend the University of Southwest Louisiana on a football scholarship. He pursued general studies and criminal justice during his time in college and started working with the St. John Parish Sheriff’s Office in February 1997. Baker went on to obtain his master’s degree in criminal justice from Columbia Southern University and made St. John Parish his permanent home.

“I don’t plan on going anywhere, even when I do retire,” Baker said. “I have two daughters, one son and two grandkids, and I’m looking forward to seeing them grow and become productive citizens.”

Over the past 24 years, he’s worked in the jail, public relations, the detective bureau and patrol. Baker is currently over the patrol division, and he enjoys taking the time to help new officers discover their role in the St. John Sheriff’s Office.

“I enjoy making decision, the easy decisions and the tough decisions. It’s different every day,” Baker said. “I also love helping people. My goal is to help the younger guys find out what their vision is and provide them the resources so they can go to that specialized division, whether it’s narcotics or the detective bureau, crime scene, or if they want to stay in patrol and move up to supervisors.”

Baker said volunteering as a basketball coach for St. John Parish Recreation is similar to his patrol duties because it allows him to be a mentor to the younger generation.

“The reason why I like working with the community and kids is because I grew up playing sports all my life, and I like to say sports is what kept me out of trouble. Sports might help other kids stay out of trouble also,” Baker said. “It teaches you about discipline and teamwork. I started coaching basketball, and it’s the same thing as teaching the deputies that I work with.”