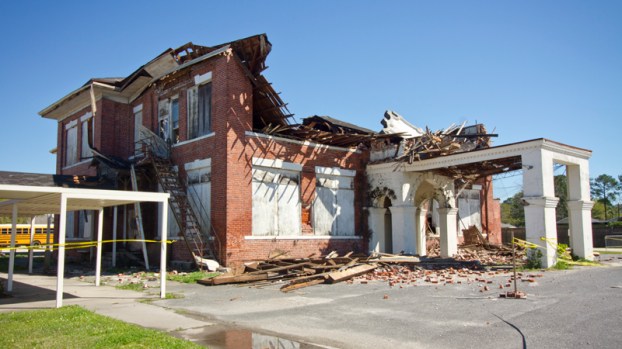 LAPLACE — Cindy Janecke with All South Consulting came before the St. John the Baptist Parish School Board Thursday night to provide an update on the demolition of the old Godchaux Grammar School in Reserve.

More than 110 years after its construction, the roof of the deteriorating building caved in amid wind and rain the night of March 15. The site was roped off the same week as plans began for demolition.

All South Consulting was selected as the engineering firm during the April 29 School Board meeting with an estimated cost projection of $225,000. According to Janecke, All South recently sent a letter to the U.S. Army Corps of Engineers and will soon reach out to at least five contractors to find the best deal on the demolition work. She said demolition is expected to start around July and last for a couple of weeks.

With the end of the fiscal year approaching, the St. John School Board is also working to get into a better financial position for the upcoming year.

The School Board has taken steps to save money for the next school year, including closing the Milesville site and relocating the STEM Program to the East St. John High School campus.

According to Jason Akers of the Foley & Judell law firm, the revenue anticipation note, commonly referred to as a cash flow loan, will help bridge the gap between the beginning of the fiscal year on July 1 and when revenues from ad valorem taxes arrive next January. The intention is to structure the loan in a way that it will only be drawn down as needed. Since it will become effective for fiscal year 2022, it will be included in the upcoming budget.

The State Bond Commission will begin communicating with banks to set up the loan.

The St. John School Board also expects to receive millions in funding from the Elementary and Secondary School Emergency Relief Fund, part of the American Rescue Plan prompted by COVID-19.

During Thursday’s meeting, Dominique Miller announced that the School District received approximately $99,100 in payments for ESSR I on May 10. Additional funding is awaiting approval. According to Miller, the ESSR I application is encompasses $3.8 million, and funds need to be used by Sept. 30, 2022.

As of now, the application is still pending approval.

“We do expect it will be approved by June 1. At that point, we can start to get the reimbursements,” Miller said.