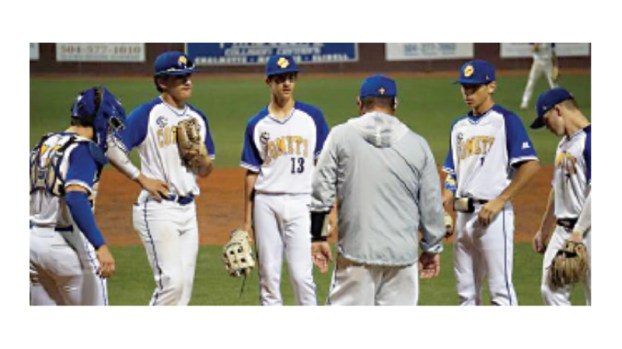 A championship recap story will appear in the Wednesday edition of L’OBSERVATEUR.

Earlier this week, No. 2 seed St. Charles Catholic earned a 3-0 win over No. 3 seed Lafayette Christian in the Division III semifinals Wednesday morning. The semifinal game was a defensive battle that featured strong pitching from both teams. Senior Cade Pregeant and sophomore Michael Hotard split time at the pitcher’s mound to guide the Comets to vic-tory. The Comets pitchers only allowed three hits during the game.

Pregeant came in clutch when the bases were load-ed with no outs during the fourth inning, according to Coach Wayne Stein.

“Cade Pregeant got us out of it, and it really changed the momentum of the whole game. We were able to get a big hit by Connor DeJean in the fifth to take the lead 1-0. A big double by Anthony Fernandez extended the lead to 3-0,” Stein said. “Then it was just lights out the rest of the way; Cade Pregeant didn’t allow a hitter. He threw four complete innings and 29 pitches, which is pretty unheard of, and helped us advance to the next step.”

Prejeant, Joey Nuccio, Josh Tamplain, Bryce Bertucci and Austin St. Pierre also had hits for the Comets during the semi-finals. Stein has made eight state championship appearances with the Comets – once as a student, five times as an assistant coach and twice as a head coach. Seven of those championships ended in a loss for the Comets, but the eighth time was the charm when SCC upset top-seeded University High for its first LHSAA state baseball title in 2019.

“Having that state championship win takes the pressure off,” Stein said. “When you haven’t won one and you’ve been so close, it put a little added pressure. I think we’re past that, and that’s a positive.”That doesn’t mean it’s any easier to win a championship.

The COVID-19 pandemic interrupted the 2020 season, so this is the first opportunity the Comets have had to recreate 2019’s success in Sulphur.

St. Charles Catholic entered Friday’s game with a 22-9-1 record for the season, while Notre Dame came into the game with a 25-6 season record.

Going into the championship, Stein said, “Notre Dame is a traditional power. They expect to be there, and so do we. They’ve been a great base-ball team all year. They’re the one seed, we’re the two seed, and whoever plays the best for two hours will be the champion.