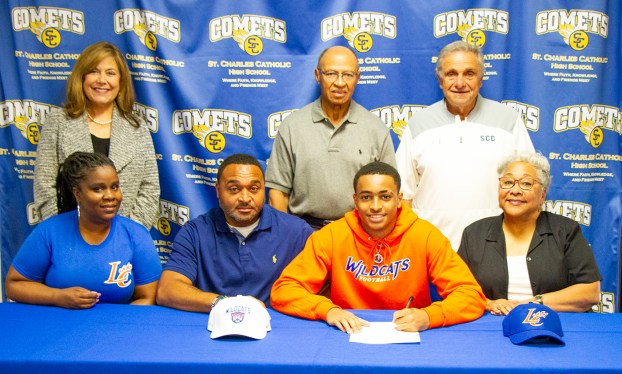 LAPLACE — Kamren Campbell and Keenan Gauff always stood out as tenacious competitors on the St. Charles Catholic Comets football team. Now, they are progressing to compete in the NCAA American Southwest Conference with Louisiana College in Pineville.

Campbell and Gauff committed to Louisiana College May 7 during a signing ceremony held in the Comets field house. They were surrounded by family, friends and teammates who offered well-wishes in their journey to becoming Wildcats.

Campbell said choosing Louisiana College for the next era of his athletic career was a no-brainer. He was drawn to the love and support he felt during each campus visit.

“I wouldn’t say it was a hard decision because when the coaches first talked to me about it, I knew I was at home,” Campbell said. “They treated me with hospitality and came to me with respect. I could tell that’s a place where I want to be. I want to go somewhere I’m always welcome.”

Gauff had a similar experience with Louisiana College throughout his three campus visits.

“Louisiana College gave me a majority of the love, and they kept in contact with me for the last six-to-seven months. They were true to their word,” Gauff said.

Gauff was also drawn to Louisiana College’s recognition as the safest college campus in the state in Fall 2020.
SCC’s Coach Monica is confident both young men will continue the tradition of excellence they have demonstrated throughout their high school careers, both on and off of the football field.

Monica also said what happens on the field is inconsequential to the bigger picture of enjoying the college experience and leaving school with a degree in hand.

“I want them to enjoy the experience of being in college because college football is a lot of work. It’s almost like a job,” Monica said. “It looks glamorous on Saturdays, but after Saturday night all the way to next Friday, it’s a regimented situation that you have to learn how to embrace. I think it prepares you for the future.”

Campbell has played all over the field during his time at St. Charles Catholic. He put 100 percent effort into each position, whether it was cornerback, defensive back or special teams.

His favorite memories from SCC included attending camp before the start of each season.

“That was the time when we always bonded and got to know each other, and you always had a new experience every time you went,” Campbell said. He added that SCC prepared him well for the next level of competition, and learning the game under the direction of Coach Monica helped him become a better football player and a better man.

“I want to learn as much as I can so I can keep going and continue to perfect my craft,” he said.

Campbell plans to study psychology in college to gain a better understanding of himself and others.

Gauff plans to study business at Louisiana College. From the time he was young, he’s always known how to hustle and work hard for what he wants in life.

Now, he is setting his sights on earning his spot on the field during his first college season.

While those closest to Gauff know him as a laidback guy who is cool, calm and collected, he has no shortage of energy on the football field. His favorite memory from his time at SCC was rushing for 212 yards during a game against E.D. White during his junior year. Positions he’s played in the past five years have included running back and wide receiver.

Gauff said Coach Monica has been his role model since he joined the Comets football team as an eighth grader.

“He is a legend here, and he prepared me for the big-time games in the playoffs and state championships,” Gauff said.

Now, as a graduating senior, he has all the skills he needs to be successful in Pineville.