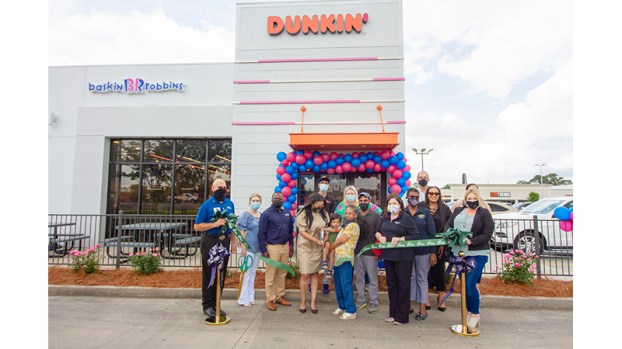 A ribbon cutting ceremony celebrated the opening of Baskin-Robbins inside of Dunkin’ Donuts, located at 1334 W. Airline Highway in LaPlace.

LAPLACE — Baskin-Robbins is back in St. John the Baptist Parish.

Owners Bhavin and Firan Chauhan celebrated the grand opening and ribbon cutting of the new Baskin-Robbins inside of Dunkin’ Donuts, located at 1334 W. Airline Highway in LaPlace.

Bhavin Chauhan said Dunkin’ Donuts and Baskin-Robbins have been sister brands for many years, and some of the newer stores in urban areas have opened as combo locations.

Dunkin’ Donuts has been in LaPlace since 2015. The drive-thru remained open as renovations were completed in advance of the grand opening of Baskin-Robbins on Tuesday, April 27. 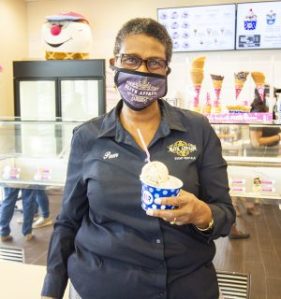 The location is now the perfect one-stop shop for donuts, coffee, ice cream and other sweet treats.

“We saw stores doing combos, and we thought it would be a good fit here, so we brought it to LaPlace,” Chauhan said. “It adds another component to our business. People can come in and get donuts and coffee in the morning and milkshakes in the afternoon and evening. It rounds us out pretty well.”

The Baskin-Robbins brand was founded in California back in 1945 by brothers-in-law Irvine “Irv” Robbins and Burton “Burt” Baskin. Robbins began working in family-owned ice cream shops as a teen, while Baskin produced ice cream for his fellow troops while serving in World War II.

The 31 in the logo represents the brand’s belief that customers should be able to experience a new ice cream flavor every day of the month.

According to Chauhan, community members can find more than 30 flavors of ice cream in the LaPlace location, in addition to milkshakes, ice cream cakes, banana splits, sundaes and smoothies. Frozen yogurt and fat-free options are also offered.

One of the newest menu items is the mangonada, a traditional Mexican frozen beverage that mixes mango flavoring with tangy seasoning.

Chauhan said the brand does an excellent job of “keeping with the times” to keep the menu fresh. 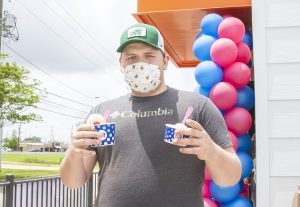 Nick Rose was one of the first customers in line when Baskin-Robbins opened April 27 in LaPlace.

“Dunkin’ is very innovative as well,” he said. “We just added an avocado toast. The brand is moving forward with healthier options. We’re also adding new milk alternatives such as oat milk and almond milk, and we’re coming out with coconut milk.

Other items on the Dunkin’ Donuts menu include but are not limited to breakfast sandwiches, macchiatos, espressos, lattes, hot chocolate and, of course, a wide variety of donuts.