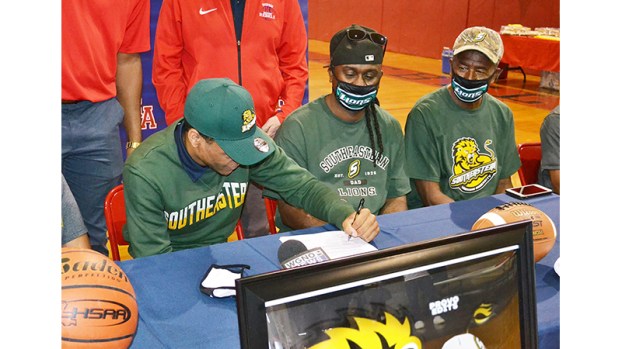 Gage Larvadain signs a letter of intent to play football and basketball at Southeastern Louisiana University.

RESERVE — Riverside Academy senior Gage Larvadain will become the first in the school’s history to play multiple Division One sports at the collegiate level. Larvadain was surrounded by family, coaches and classmates in the Rebels gym on April 26 as he signed a letter of intent to play both football and basketball at Southeastern Louisiana University in Hammond.

It was never a question of which sport Larvadain would pursue in college because he had his heart set on both. He had opportunities to go to Ouachita Baptist in Arkansas or walk on to different places; however, Southeastern was the only school that offered what he wanted most.

“I would describe myself as the ultimate competitor. When it comes to getting inside the lines of the football field or the basketball court, I think I turn into a different person sometimes,” Larvadain said. “There are three things I was looking for in a college, and two of them were being able to play football and basketball. Southeastern is giving me an opportunity to go to college for free and play both sports, so it was just a perfect situation.”

Larvadain has played both basketball and football from the time he was 4 or 5 years old, starting with recreational leagues.

He joined Riverside Academy’s basketball team as a middle schooler and played junior varsity in seventh and eighth grade. Ninth grade on the varsity team became the most memorable season of his high school basketball career. The Rebels fell just one basket short of securing the state championship, but it was still an unbelievable season with more than 30 wins. At one point that year, Riverside Academy’s basketball team was ranked second in the nation by MaxPreps.

Larvadain looked up to the upperclassmen on the team, especially Jared Butler. 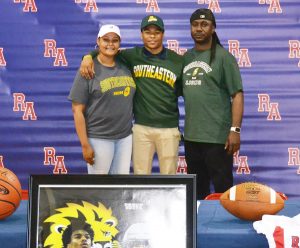 Gage Larvadain was joined by parents Catherine Jones and Davion Gipson in the Riverside Academy gym on April 26.

“It was great just playing with those guys because they are examples of what Riverside is about,” Larvadain said. “Jared Butler went from Riverside to winning Most Outstanding Player in the championship for the NCAA. Four years ago, I played with him, and all his hard work paid off. I just think about how he came here and paved the way. Why can’t I be next?”

This year, Riverside Academy’s basketball team advanced to the semifinals before taking a loss to Calvary Baptist. Larvadain averaged 28 points, eight assists and 11 rebounds per game.

Larvadain ended his senior season on the Rebels football team with 33 touchdowns. Of those, 23 were rushing, six were carrying and four were passing. He also had 1,423 yards and averaged more than 11 per carry, threw for 547 yards and caught 19 passes for 430 yards.

When Larvadain first joined the football team in middle school, he played safety. He didn’t move to offense until ninth grade under the direction of Coach Chris Lachney, who now coaches at Southeastern.
Larvadain got his first taste of playing quarterback when he backed up Jordan Loving during his freshman year. He was starting at quarterback by his sophomore year and remained there for almost all of his junior season.

Larvadain proved he has many talents on the field as he moved between receiver and quarterback for his senior season. Every game in 2020 was one to remember, but his favorite was Week Two against Catholic of Pointe Coupee.

“The year before, we went to Catholic Point Coupee and they kind of man-handled us and made us look like we weren’t football players. We were able to go back the next year and do what they did to us,” he said.

Larvadain has never been the tallest or strongest athlete on the field, but he makes up for it with speed. He takes inspiration from professional players like Tyrann Mathieu, who currently plays for the Kansas City Chiefs.

“He’s a small guy that came from New Orleans. His story isn’t too different from mine,” Larvadain said.

Heading into college at Southeastern, Larvadain is determined to leave a legacy of being one of the best there ever was.

He is the son of Catherine Jones and Davion Gipson.

RESERVE — With a No. 12 ranking, the Riverside Academy softball team found itself in a David and Goliath scenario... read more