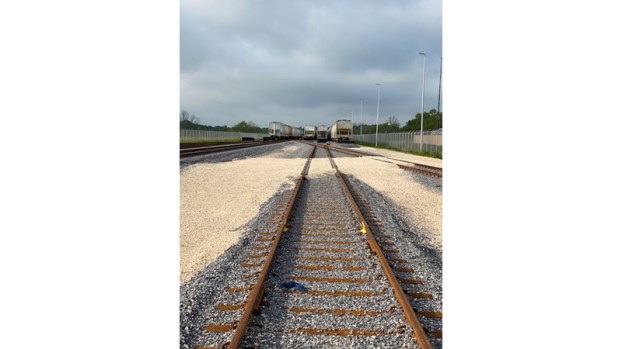 Port of South Louisiana is pleased to announce that the construction of a six-track rail yard in St. Charles Parish is now complete. The rail yard, located at SoLaPort, a port-owned property on the west bank of the Mississippi River, is configured to accommodate between 250 and 350 rail cars exclusively for Dow Chemical that is accessible via a rail spur designed and installed by Dow on the south side of the its facility. The rail yard will be used for rail car maintenance and storage.

Photos Courtesy of Dow ChemicalThe project, which began construction in January 2020, was funded in part by $8.775 million from Louisiana’s Capital Outlay program. Designed by AECOM, the yard was laid out to comply the standards of Union Pacific Railroad and Dow. Constructed by Barriere Construction, the project required installation of a 2,000 square yard two-track railcar storage and maintenance pad and related infrastructure, including an access road from LA Highway 18, over 27,000 feet of track connecting to the rail spur, switches to facilitate “cherry-picking” cars, security fencing along the perimeter of the leased property, and lighting.

“This project is exemplary of the multi-modal opportunities along our 54 mile port jurisdiction,” says Port of South Louisiana Executive Director Paul Aucoin. “Although the Mississippi River is our anchor resource, the rail systems, roads and air facilities we have complement the extraordinary work done at the Port of South Louisiana.  We are pleased to partner with Dow in order to enhance their operations.”

Dow has entered into a 20-year lease agreement with the Port of South Louisiana, with an option to renew for an additional ten years, to provide efficient, reliable, and cost-advantageous services for its customers with opportunities for growth over time.

“Dow is excited about the completion of the railroad and the partnership with the Port of South Louisiana,” says Jackie Yaworski, Site Director at Dow Chemical. “With rail volumes increasing this gives us the ability to store more railcars on site and lower our shipping costs.

The Port of South Louisiana, in conjunction with Dow, plans to host a ribbon cutting in the next month to memorialize this special project.

About the Port of South Louisiana

Founded in 1960, the Port of South Louisiana [PSL] is a 54-mile port district on the Mississippi River between New Orleans and Baton Rouge, encompassing the parishes of St. Charles, St. John and St. James. The facilities located within the port’s district consistently handle over a quarter billion short tons of cargo annually, ranking it the largest tonnage port district in the Western Hemisphere [and the 16th largest in the world], the nation’s greatest grain exporter, and one of the major energy transfer ports in the United States. Along the 108 miles of deep-water frontage on both banks of the river there are seven grain transfer facilities, four major oil refineries, 11 petrochemical manufacturing facilities and several other facilities for a total of more than 50 docks owned and operated by an impressive group of companies in the Port District, such as ADM, ArcelorMittal, Cargill, DowDupont, Marathon, Shell, Nucor Steel, Occidental, Valero, and Occidental Chemical. The Port also owns and operates the Executive Regional Airport [KAPS]. To learn more, visit us at www.portsl.com, like us on Facebook [PSL and KAPS], and follow us on LinkedIn and Twitter.

Update: Personnel on-site have given the all-clear and reopened the road. The affected area has been secured and clean-up will... read more